The university’s core mission remains unchanged to this day. It is to advance—through our teaching, research, service and community engagement—in all ways possible the people of this province.

U of A President Bill Flanagan
„

In a ceremony rich in traditions, the U of A’s new president said he is taking on the role at a pivotal time in the university’s long and distinguished history. 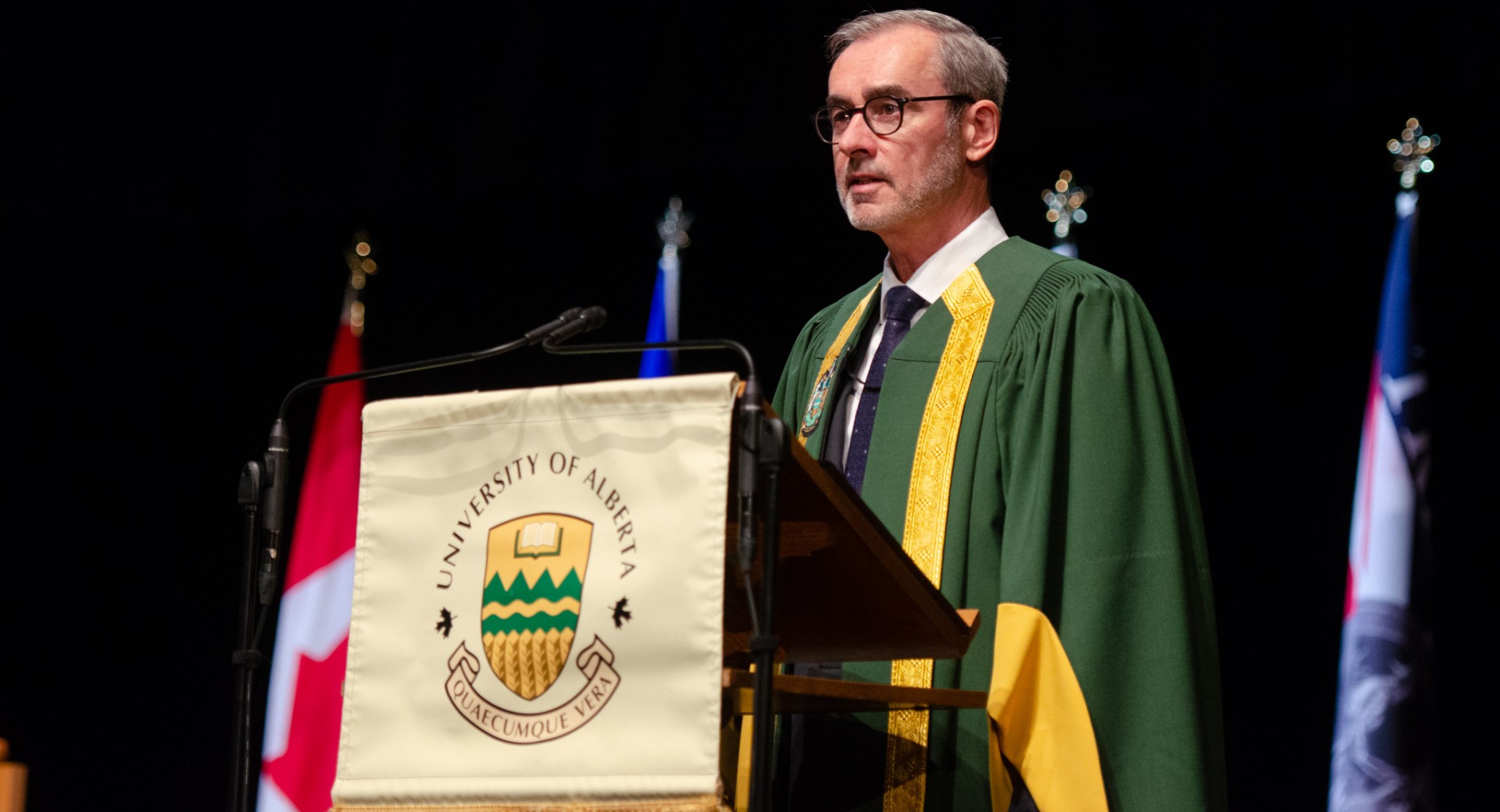 U of A president Bill Flanagan addresses a small, physically distanced audience at the Jubilee Auditorium and hundreds more watching online during his installation ceremony today. Flanagan pledged "to advance the best interests of the university and all the diverse communities that it serves." (Photo: Jordon Hon)

So challenging was the youngster’s first project, Cardinal wondered whether he would survive its completion.

He did, and today St. Mary’s stands as an architectural marvel and a signature design by one of the country's most influential architects, who drew his genius from Indigenous traditions of respect and sensibility towards nature and oneness with the land.

Growing up in nearby Lacombe, University of Alberta president Bill Flanagan had occasion to attend church at St. Mary’s.

“As a boy, I was both fascinated and, I must confess, deeply puzzled by this remarkable building,” he remembered. “I had never seen anything like it, and I did not understand it.”

Flanagan would come to appreciate the intricacies of St. Mary’s with time as he learned more and more about the unique vision of its creator.

Then in 2018, Flanagan, who was then well into his third term as dean of law at Queen’s University, found himself with the distinct honour of granting Cardinal an honorary degree.

Now, on the day Flanagan was installed as the U of A’s 14th president and vice-chancellor—in a ceremony brimming with appreciation for the sovereignty and nationhood of Alberta’s First Peoples—he said he was thinking of how the two strangers from the same geography but different worlds became friends.

Flanagan began his remarks by acknowledging the university’s location on Treaty 6 territory and the homeland of the Métis, highlighting the inclusion of the Treaty 6 and Métis flags for the first time in a U of A installation ceremony.

“Although a small step, it is an important one in the university’s journey toward reconciliation with the Indigenous peoples who have lived on this land for thousands of years, and who, through the treaty process, generously offered to share these lands with those who came from far away.”

Flanagan also made mention of the moccasins he was given during the ceremony, which were hand-crafted by Janet Delorme and Lana Sinclair in the U of A's Faculty of Native Studies as a gift symbolizing the start of a new journey.

“And with these moccasins, I am embarking on a new journey here at the University of Alberta, a journey that I will endeavour with all my ability to walk in a good way—to advance the best interests of the university and all the diverse communities that it serves.”

Flanagan also turned his thoughts to his parents and how the U of A gave both his mother and father the opportunity and life they could never have imagined while growing up on the prairies in the shadow of the Great Depression.

“This is the University of Alberta story, one of opening doors and building opportunity for all the people of this province and beyond,” he said.

Flanagan told the small but receptive socially distanced crowd of less than 100 in attendance and hundreds more watching online that he is taking on the role of president at a pivotal time in the U of A’s long and distinguished history.

Flanagan recounted the university’s first convocation address in 1908, when President Henry Marshall Tory spoke of the opportunity to found a “just institution” with “an intellectual and spiritual atmosphere in which prejudice and hatred” cannot live.

Tory then insisted that the university be connected “as closely as possible to the life of the people,” and that the “uplifting of the whole people shall be its final goal.”

Flanagan noted that Tory closed his remarks with a pledge “to the people of this province to unite in heart and soul to administer this trust for the public good.”

“The university’s core mission remains unchanged to this day,” said Flanagan. “It is to advance—through our teaching, research, service and community engagement—in all ways possible the people of this province.”

He added, “a university that is committed to the core values of equity, diversity and inclusion of all the peoples and communities that make up our remarkable university and beyond.”

Over the next century, the U of A built on its initial mission, Flanagan said—first powering the development of Alberta’s natural resources, then training health-care workers, business and community leaders, scientists, lawyers and teachers.

He said a similar call that led to the formation of the university more than a century ago is once again calling on the U of A to develop new paths for growth and opportunity, whether that be artificial intelligence or new energy systems.

“With our students always top of mind, we will provide a learning experience that looks to the future, providing our students with all the skills and intellectual curiosity that will enable them to build Alberta’s economy of the future—dynamic, innovative, inclusive and global,” he said.

Flanagan also spoke of the university’s ambitious program of academic and administrative restructuring, called the University of Alberta for Tomorrow.

Not only does this plan put the U of A on a path to financial sustainability, Flanagan said, but it will also enhance the student experience and make an even greater contribution to research that advances society.

“Together, we can renew and grow the university’s global leadership position in education and research, continuing to play the central role that the University of Alberta has always played in driving economic growth, innovation and creativity for the public good of all the people of this great province and beyond.”