Blast of winter heats up research on river ice 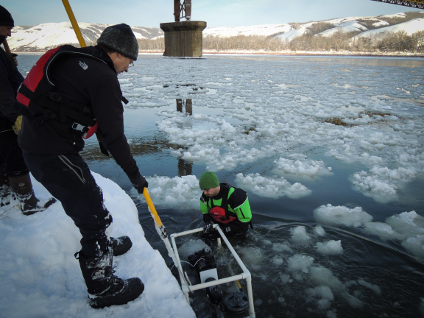 Overnight temperatures plunging below freezing signal not only the start of winter, but also a critical period for understanding how ice forms in the North Saskatchewan River.

In the blackness before dawn, University of Alberta researcher Mark Loewen and his graduate students pull on neoprene hip-waders or dry suits to deploy their “frazil cam.” The custom-made, underwater camera rig allows them to take photographs of ice crystals, called frazil, as they form in the sub-zero water.

“Once the ice cover forms, there’s nothing for us to see,” said Loewen, a professor of water resources engineering.

The data they’re collecting about the volume, shape and size of frazil crystals improves our overall understanding of river ice processes. This is of great interest to communities and industry since frazil ice can clog water intakes for drinking water treatment plants and industrial facilities along the river.

Companies like BC Hydro, which operate hydroelectric dams along the Peace River, determine when and how much water, which is warmer than the rest of the river, to release during freeze-up based on predictions from a river ice computer model. The data gathered using the frazil cam will ultimately improve the accuracy of these types of models.

Unlike lakes or ponds, where ice forms in a sheet across the surface, ice in northern rivers forms as frazil crystals, which vary in size as tiny as fractions of a millimetre across. These crystals collide and freeze together forming large flocs that eventually rise to the surface to form “frazil pans,” which look like clusters of ice discs. 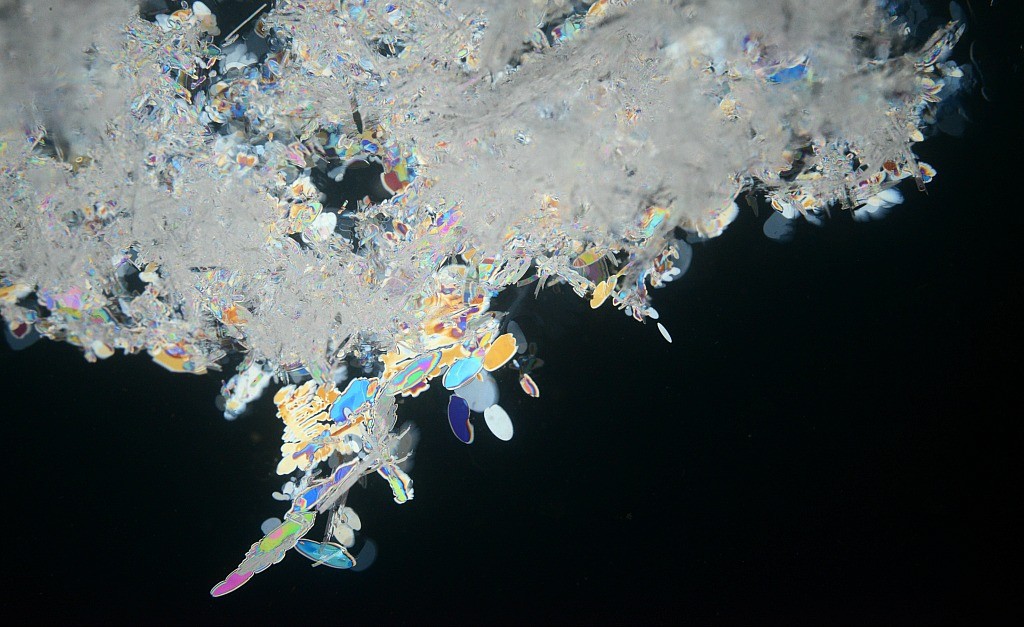 A frazil ice floc in the North Saskatchewan River.

“They float downstream and, when the concentration gets high enough, they jam up at a certain point in the river,” explained Loewen. “As more frazil pans reach this location, the edge of the ice cover moves upstream forming a solid ice cover as it progresses.”

All this freezing occurs in a matter of days when the water temperature first dips below zero. Because the water in the North Saskatchewan is so turbulent, it supercools quickly and kick-starts frazil formation.

Loewen’s team first deployed the frazil cam in the North Saskatchewan in 2014 and have since expanded to the Peace and Kananaskis rivers. Their frazil cam is a high-resolution digital SLR outfitted with a flash and cross-polarizing filters that allows it to differentiate between the disc-shaped frazil crystals and the blackness below the surface. It takes a photograph every second—about 9,000 each morning it’s deployed.

“If it’s cold enough, fast enough, freeze-up happens in a few days,” said, Loewen, who also uses aerial drones to determine how much of a river surface is covered in ice.

The work Loewen’s team is doing in the field and lab is complemented by fellow U of A ice researcher and department colleague Yuntong She, who creates computer models that predict ice formation from freeze-up to thaw and break-up. She is developing a comprehensive model that can be used by anyone, anywhere and can be calibrated to specific rivers.

“A computer model is a helpful tool because it doesn't have the limitation of lab experiments, but it also helps understand the field data, filling in the gaps,” said She, an assistant professor in the Department of Civil and Environmental Engineering. “It makes for a comprehensive picture.”

River ice breakup can be instigated by spring runoff, mid-winter thaws and hydro-peaking operations—all of which can have ecological and economic impacts. She has observed first-hand the impact ice jams can have, with water levels sometimes rising by several metres in mere minutes. Problems also arise when jams release, which can result in severe and hard-to-predict flooding, she said.

“When conditions are right, it can cause it to suddenly release and send the wave of ice and water downstream. In that case, we want to predict what the water level is going to be as this flood wave arrives downstream.”

Ice research is in its relative infancy, She said, and not surprisingly the U of A and other northern research universities in Canada are leading the way.

“Even though this is important research, ice is not a problem everywhere in the world. It’s also very complex and a lot more work needs to be done to improve our understanding of the processes at work.”

Blast of winter heats up research on river ice
Newsroom