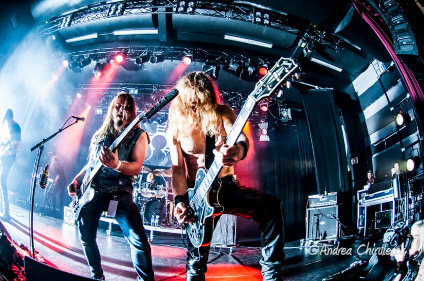 They came from Norway, corpse-painted youth with pseudonyms like Necrobutcher, Count Grishnackh and Abbath Doom Occulta, creating a cacophony of buzz-saw guitars, pummelling drums and otherworldly shrieks that rendered unintelligible lyrics extolling Satanism, Norwegian mythology and untamed wilderness. They called the malevolent noise they made black metal and three decades after its unholy inception, proponents of the style can be found all over the globe.

Now Bergen, the city that legendarily gave rise to this extreme form of music and its grim esthetic, forms the backdrop of a new documentary called Blekkmetal, which chronicles the eponymous one-off 2015 music festival that celebrated the roots and persisting appeal of black metal. Jason Wallin, a professor in the University of Alberta’s Faculty of Education, helped write, shoot and co-produce the film.

It’s fair to ask how this particular niche of extreme music intersects with Wallin’s academic pursuits.

“In part, my role here is associate professor of youth culture and media in curriculum, so a lot of my work revolves around counter-cultural formations—how youth respond to orthodox or mainstream culture,” said Wallin, who shares this interest with a growing number of scholars in North America and Europe.

“There are conversations between people in the [black metal] scene and academics around seminal questions of this particular art form, like how gender plays out within these spaces, how national identity plays out, and other questions that impinge on politics and ethics and how far art like this can be pursued—censorship and that sort of thing. Black metal poses its own sets of questions and problems.”

“Bergen is very particular and singular in its geographic isolation and its harsh weather and environment—really not so different from Edmonton—and so it’s interesting this harsh art form and esthetic emerged from this environment,” said Wallin, whose own serious interest in black metal deepened when he relocated to Edmonton from Calgary in 2005.

“My first winter here was particularly brutal—like, minus-30 brutal—and somehow the feeling of black metal resonated with the often foreboding surroundings and bleakness of the long winter.”

So just what is black metal? To the uninitiated the music is apt to sound dauntingly chaotic, with its maelstrom of tremolo-picked guitars, “blast beat” drumming—a frantic succession of kick and snare that at times obscures the tempo—and non-melodic vocals rendered in shrieks and snarls, all cloaked in lo-fi production, Wallin said.

“As to the imaginary aspect of it, there’s lot of imagery of the wild, primitive landscapes. It’s a move back to a time out of step with society as we know it right now, a return to paganism, a return to a much harsher esthetic, very misanthropic,” he added. “I think black metal captures a different esthetic take on social life that’s not predicated on compulsory happiness. Black metal, in that sense, becomes an expression of what goes culturally unsaid and unthought, and that can’t be expressed any other way.”

Wallin and his colleagues, including veteran filmmaker David Hall, Concordia University education professor Vivek Venkatesh and Concordia mobile media scholar Owen Chapman, captured more than 50 hours of interviews, performances and rehearsals, as well as footage in and around Bergen. And though the documentary reflects on the foundations of black metal, Wallin said the filmmakers made a deliberate choice not to rehash its tabloid-worthy history, when a handful of scene members in the early 1990s became more notorious for suicide, murder and church-burnings than for the music they made.

“This was a very small group of people who were affiliated with the scene and it was their actions that came to characterize this moral panic that emerged around black metal because, of course, the media jumped on this right away and was quick to associate it with Satanic ritual and fervent anti-Christian ethos and murder and malevolent impulses. That was really a stigma artists carried for a long time and now, especially in Norway, that stigma seems to be lifting because more and more people have become interested in the art form.”

In fact, with the ascendance of pioneering Norwegian black metal bands as internationally known artists—and the spate of bands they’ve inspired around the world—Norway has come to embrace the uniquely dark, demented artform spawned from its wild, frigid heart.

Blekkmetal screens at 7 p.m. on Tuesday, Dec. 6, at Metro Cinema, followed by a Q&A with Jason Wallin.

Watch the Blekkmetal trailer (Note: Contains language that some may find offensive)