Even trace amounts of nutrients like phosphorus stimulate algae growth in nearby lakes and streams.

To swim or not to swim and what cottagers can do to control the spread of the nuisance bacteria. 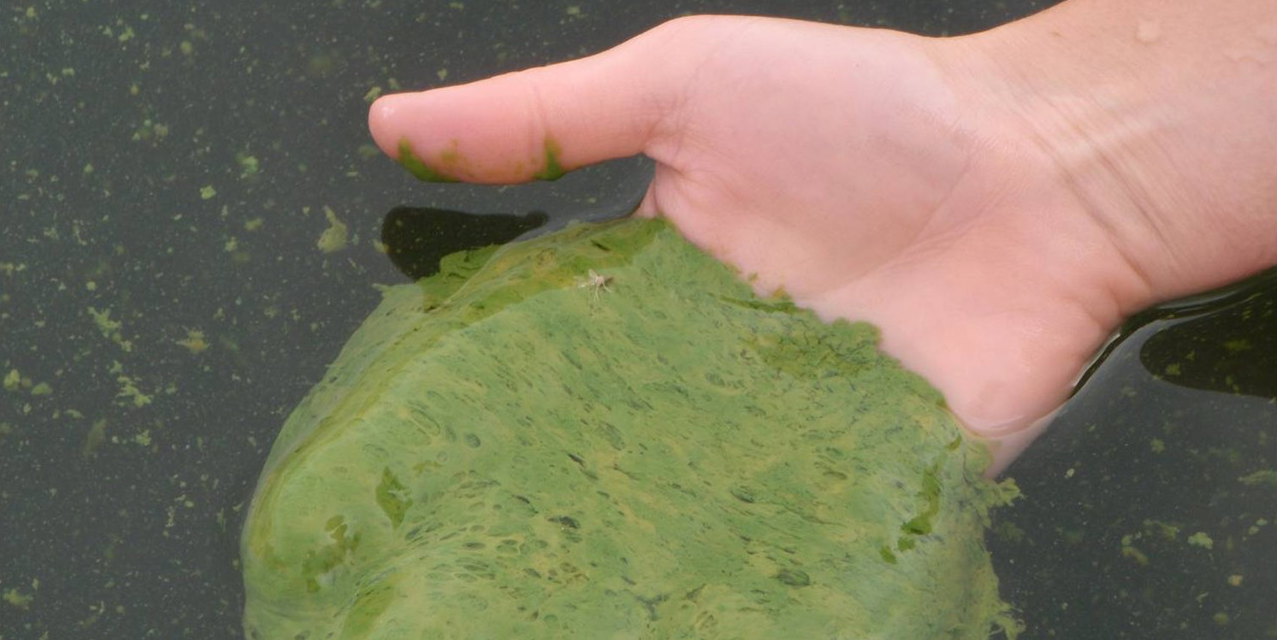 It’s slimy, it’s stinky and like a creature from a summer horror flick, it’s coming back to Alberta lakes this vacation season.

Blue-green algae—the scum-inducing bacteria to blame for the annual ‘eww’ factor in local swimming holes—should be blooming by mid-July, says a University of Alberta water expert.

“It’s inevitable these days,” said Rolf Vinebrooke, a professor in the Faculty of Science who studies cyanobacteria, the technical name for blue-green algae, named for the colour it gets from chlorophyll.

“Even trace amounts of nutrients like phosphorus stimulate algae growth in nearby lakes and streams.” —Rolf Vinebrooke

The average number of Alberta lakes for which the province has had to post recreational health advisories about the nuisance bacteria has more than doubled since 2012, said Vinebrooke, adding there were about 30 to 40 lakes that had advisories posted by late summer.

Nor is the problem going to disappear, Vinebrooke warned.

“We are going to continue to see blue-green algae as more of a problem than it was in the past. A lot of lakes are warming up in different parts of the world at a faster rate than air temperature. Once you heat up water, it is harder to cool off than air, and that bodes poorly for future water quality of a lot of lakes, as many blue-green algae love warm water.”

Alberta’s naturally fertile soil, warming climate, excessive human use of phosphate-rich products like lawn and crop fertilizers and even leaky septic fields in cottage country, all combine to compound the problem of outbreaks or ‘blooms’ of blue-green algae, he said.

“Even trace amounts of nutrients like phosphorus stimulate algae growth in nearby lakes and streams,” he added.

In fact, the algae invades recreational lakes across Canada each year and can cause various symptoms through contact with the toxins it produces, ranging from skin rashes to liver damage if ingested.

To swim or not to swim?

Not all blue-green algae is toxic, so that can muddy the decision for most people about whether to risk going for a dip or not. Vinebrooke, who is working with a handful of summer villages surrounding Pigeon Lake to better understand the algae growth there, advises water-worshippers to use common sense.

“If you can see a visible blue-green film on the lake, don’t go in for a swim, because you don’t know what that algae could be producing that could cause you a problem.”

Boating and fishing are less likely to cause problems for vacationers on algae-filled lakes, and, some good news for anglers in particular, extensive studies haven’t revealed issues with eating the muscle tissue—the filleted part of the fish—Vinebrooke added.

Got a cabin at the lake? Help fight blue-green algae

Though blue-green algae is here to stay, there are measures property owners can take to help control it. The payoff is long-term but important, he said.

“We aren’t doing it right now for us, but for the next generation. If we try to do something about it now, hopefully the benefits will be realized for our children or grandchildren using the lakes.”

Landowners can do their part by: