BMI not best way to decide who needs bariatric surgery most 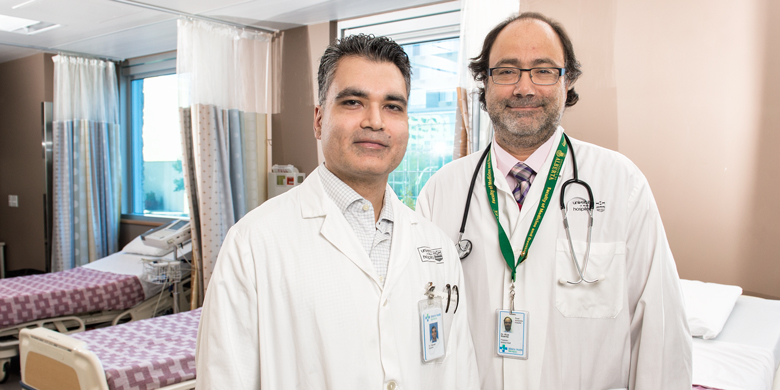 131016-padwal-sharma-banner
Raj Padwal (left) and Arya Sharma found that diabetes, gender and smoking status are better indicators of mortality risk among obese patients than the commonly used measure of BMI. They hope their research will change how doctors prioritize patients for bariatric surgery. (Photo: Richard Siemens)

(Edmonton) Most people who receive bariatric surgery in Canada and around the world are obese women, even though their male counterparts are more at risk—especially if those men are smokers and have diabetes, according to newly published medical research from the University of Alberta.

Faculty of Medicine & Dentistry researchers Raj Padwal, Sumit Majumdar, Arya Sharma and colleagues published the results of their study in the peer-reviewed journal, JAMA Surgery. Their findings confirm what many have long suspected—that body mass index (a calculation based on height and weight) is not the best way to prioritize patients for bariatric surgery.

Padwal, Majumdar and Sharma wanted to find out whether simple parameters could be used to predict risk of death among obese patients. After reviewing more than 15,000 bariatric surgery patient records from the U.K., they discovered that gender, smoking status and diabetes accurately predicted those most at risk. “If we have to decide who should get the surgery first, it should be based on who has the highest risk of mortality,” said Sharma. “We looked at thousands of patient files and many different parameters, and surprisingly enough it came down to three things—if you’re male, you’re a smoker and you have diabetes, you have the highest risk.

“If you’re a female non-smoker without diabetes—which, incidentally, is who is being operated on in general around the world—you have the lowest risk. Bariatric surgery is most often offered to younger, female non-smokers who don’t have diabetes.”

Worldwide, about 350,000 bariatric surgeries are performed each year.

“These surgeries are being done, but are the wrong people getting them? The current BMI cut-off is missing the boat on those who need it most. Having diabetes is more important than BMI as a risk factor. Our research showed BMI didn’t really matter—so size alone isn’t a good way to decide who should get the surgery.”

The researchers created a simple mortality risk calculator that physicians can use to determine the risk of death in patients eligible for bariatric surgery, by inputting age, gender, smoking status and whether the patient has diabetes.

“We think this will be a useful tool for physicians,” Padwal said. “It’s simple math that will predict a patient’s risk of death. For example, if you’re a middle-aged, male smoker with diabetes, your risk of dying in 10 years is 10 times higher than that of a young, female non-smoker who doesn’t have diabetes—irrespective of BMI.”

Sharma, Padwal and Majumdar hope their research will result in changes to clinical practice.

Their research was funded by the Canadian Institutes of Health Research.