Board chair reappointed for second term

Doug Goss will continue to lead progress on UAlberta’s Change Agenda, selection of next president and growth in endowment. 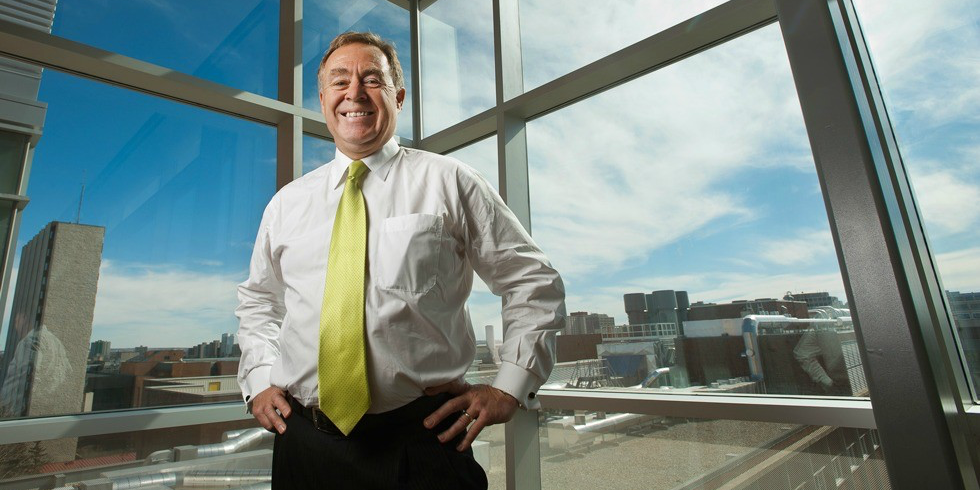 Doug Goss will serve for a second three-year term as chair of the University of Alberta's board of governors. (Photo: Richard Siemens)

(Edmonton) Douglas O. Goss, QC, a longtime Alberta business leader who is widely acknowledged for his community service, has been named chair of the University of Alberta's board of governors for a second three-year term.

The appointment was announced recently by Alberta’s minister of innovation and advanced education, Don Scott. Goss has served as board chair since February 2012.

“We are moving forward with great determination right now, and this is an incredibly exciting time for the university,” said Goss. “Alberta is bustling with energy and enthusiasm, and that makes this city, this province and this university one of the most attractive places in the world to come to.”

Goss, who received a business degree in 1981 and a law degree in 1984 from the U of A, has been widely acknowledged for his service to the community. Besides his leadership role with the U of A and many Alberta businesses, Goss has served on the board of the Hockey Canada Foundation and of B2ten, an organization dedicated to supporting Olympic athletes. He is a former board chair of the Edmonton Eskimos Football Club and of the Edmonton Oilers Community Foundation, served in leadership roles with NAIT and the Capital Health Authority, and was chair of the 2003 Molson Canadian Heritage Hockey Classic and the 2010 Grey Cup. He also received the Alberta Order of Excellence in the fall of 2013.

He says his first term in office began with some early, unexpected challenges imposed by the provincial government’s 2013 budget, which included a 7.2 per cent cut to the university’s funding envelope.

“It was a little rocky for reasons not of our doing, but all things considered, I think we rode through that very well,” said Goss.

He said the new financial reality for post-secondary education spurred the creation of the U of A board of governors’ strategic planning initiative known as the Change Agenda, designed to guide the university through budgetary challenges and beyond.

“The board endorsed the vision that all our stakeholders came up with, that this university must compete with the very best public research-intensive universities in the world,” said Goss. “That was affirmed across the board, and we have moved on a number of things that we think are going to take the university to the next level.”

Goss says with this vision of greatness as a starting point, the university began moving on a number of items last year. “Just getting the whole institution aligned under the vision of wanting to compete with the best has us pushing hard as an institution. One of the results has been some positive signs from government as far as funding is concerned.”

Goss says much of the credit for the U of A’s quick recovery must be given to the work and vision of outgoing U of A president Indira Samarasekera.

“Probably the most important thing for the board is deciding, with the Presidential Search Committee, who the next president will be and who will be charged with pushing the institution toward its goal of competing with the very best in the world.”

Beyond the selection of the new president and continuing to push the Change Agenda, Goss says his main priority is to help put in place a significant endowment campaign for the institution.

“It needs to be in the $1.5-billion range, and I would like to see that underway before my second term is done,” he said. “By the end of my term, I want to have the processes in place to attract and retain the best people, be they students, researchers or teachers.”