A five-foot-long skull discovered in war-torn Tunisia has led to the identification of a new species. 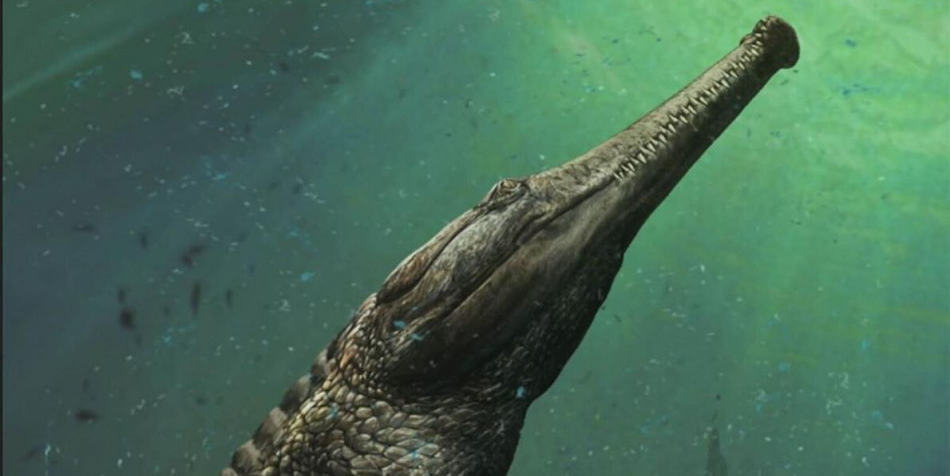 Machimosaurus rex had bullet-shaped teeth shaped with blunt tips and wrinkles, thought to have been used to crush carapaces of marine turtles. (Illustration by Davide Bonadonna)

University of Alberta PhD student Tetsuto Miyashita is among seven scientists to report the largest crocodile ever known to swim the Earth’s seas. Named Machimosaurus rex, the new species was the largest and the last survivor of crocodiles that lived in oceans during the dinosaur age. The crocodile’s skull was more than five feet long, with its total body measuring about 35 feet.

With a body length of about 35 feet, Machimosaurus rex was larger than any other known crocodiles known from oceans of the dinosaur age. Machimosaurus had bullet-shaped teeth shaped with blunt tips and wrinkles, thought to have been used to crush carapaces of marine turtles. “These teeth weren’t for cutting or piercing flesh,” says Miyashita, “they were built for crushing bones.”

Machimosaurus rex was not only the largest but also the last of its kind. Its closest relatives lived more than 30 million years earlier in the sea that is today’s England. Marine crocodiles were formidable predators during the Jurassic Period, but many of them went extinct when these habitats were lost across today’s Europe. Machimosaurus rex survived in the remaining shallow sea habitat in northern Africa.

In 2014, a team of Italian and Tunisian scientists unearthed the specimen from 130-million-year-old rocks some 30 miles south of Tataouine, Tunisia. “We have been digging in that area since 2011 because the rocks there are nothing like other places,” says Federico Fanti, assistant professor at the University of Bologna and lead author on the study. “Globally, good fossils are rare from this age—130 million years ago.”

Miyashita received a Skype call from Fanti after the dig and was shown a photograph of the crocodile skull in the ground. “There was a neck attached to it, and then the back, and the tail, and the limbs sticking out sideways. The whole crocodile was there,” says Miyashita.

Then he realized that an object that looked like a toothpick in the photo was actually a hammer. “That gave me the sense of how big this animal was,” he says. “I could tell the whole length of the skull must be about my height, 5.5 feet. That’s larger than the skull of T. rex.”

Miyashita was invited to join the dig after the first team had only managed to collect the skull. Tataouine—where George Lucas filmed his Star Wars movies—is pinched by Libya to the east and Algeria to the west. Like Lucas’s planet Tatooine in the films, it is a remote, sparsely populated desert province. Since the Arab Spring in 2012, the region’s security has been unstable.

The Fanti-Miyashita duo was set to return to southern Tunisia in early 2015 to retrieve the rest of the body from the ground, but political turmoil in the region derailed their plan. After being grounded in Italy for a week, Fanti and Miyashita decided to fly to Tunisia anyway.

The skull from the 2014 dig greeted the two in Tunis. They had only three days to clean up the giant skull and just one day to study it. “We had to work very hard to finish what would normally take weeks of work,” Miyashita recalls. “But that was enough for us to be convinced it’s a new species.”

Fanti and Miyashita remain hopeful to dig up the rest of Machimosaurus rex someday. A series of setbacks has forced the two to postpone the next expedition several times already. Barely a week after their return from Tunis, gunmen attacked Bardo National Museum in that city, killing 22 and wounding 42.

“Sometimes we are reminded that our endeavour to unlock the ancient mysteries is only possible through peace, freedom and sheer goodwill of people,” Miyashita says. “We were touched by the kindness and hospitality of Tunisians when we were there. Nothing could make me happier than us working together again to get to that big monster.”

The new study was published in the journal Cretaceous Research.

Students around the world can learn about ancient marine reptiles like Machimosaurus rex through the University of Alberta’s new mini massive open online course (MOOC) coming to Coursera Feb. 29. To date, more than 70,000 students worldwide have accessed the U of A’s paleontology expertise through Dino 101.