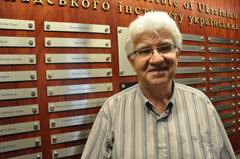 kohut-large
Zenon Kohut, U of A history and classics researcher in the Faculty of Arts, and director of the Canadian Institute of Ukrainian Studies.
(Edmonton) A new book by a University of Alberta researcher is helping to explain the political divisions in Ukraine by rejecting the idea that the country’s current political culture is shaped primarily by 20th century notions of nationalism and nation builders.

The author of Making Ukraine, Zenon Kohut, director of the Canadian Institute of Ukrainian Studies in the Department of History and Classics, says the political divisions in Ukraine today can be traced to an earlier period, which he says was more critical to the current construction of Ukrainian identity.

“Although I believe that the modern Ukrainian state and nation continues to be constructed, I am equally convinced that this construction began in the early modern period, rather than simply being the ‘invention’ of 19th and 20th-century nation builders,” Kohut said.

That early modern period began in the 17th century when Kohut says Ukraine broke away from the Polish-Lithuanian commonwealth and became a semi-independent state under Russia. He says the notion of Ukraine being considered as “Little Russia”�that Ukraine was part of a greater Russian entity�continued until Ukraine gained independence in 1991 and persists among Ukrainians even now.

“Once Ukraine left the commonwealth and came under Russia, a discourse was developed about how the country should be under Russian rule, hence the creation of the identity of ‘little Russia.’

“Some of this historical culture created a concept of two branches of one Russian nation,” he said. “In contemporary Ukraine, there’s the problem of east and west, with the east facing Russia and the west looking towards Europe.”

Limited understanding in Ukraine of the country’s 17th-century foundations has enormously impacted the culture and politics of Ukraine, he says.

“The lack of knowledge of one’s own past and traditions is evident in some parts of Ukraine. And right now that concept of Ukraine being part of the Russian world is being advocated by Russia—which has powerful influence in Ukraine—by various institutions and by post-colonial elites in Ukraine.”

Kohut says that, after Ukraine’s left the Polish-Lithuanian commonwealth, the country was left with fewer ties to Poland compared to its present connections with Russia. “It’s been entirely different on the other side because there are still these political connections. The Russians insist that Ukrainians are ‘lost Russians,’ and, at the same time, there are people within Ukraine who adhere to some of those same ideas,” Kohut said.

The book, published by the Canadian Institute of Ukrainian Studies Press, is an outcome of 15 years of research on the political culture of Ukraine and Kohut says he hopes it helps people understand the more complex formation of the country’s political history and identity.

“The book will help to better understand the political forces in Ukraine. The impact of efforts such as this are often limited to an intellectual circle and may not penetrate popular culture. The hope is that this book is received beyond the intellectual community.”

“The construction of Ukraine’s identity and political culture still continues today and will continue for quite a while. And this pull from both sides will continue,” Kohut said. “Ultimately, there has to come to some kind of consensus within Ukraine, but it’s a long process.”