Twin sisters make their own way along path originally blazed by remarkable mother. 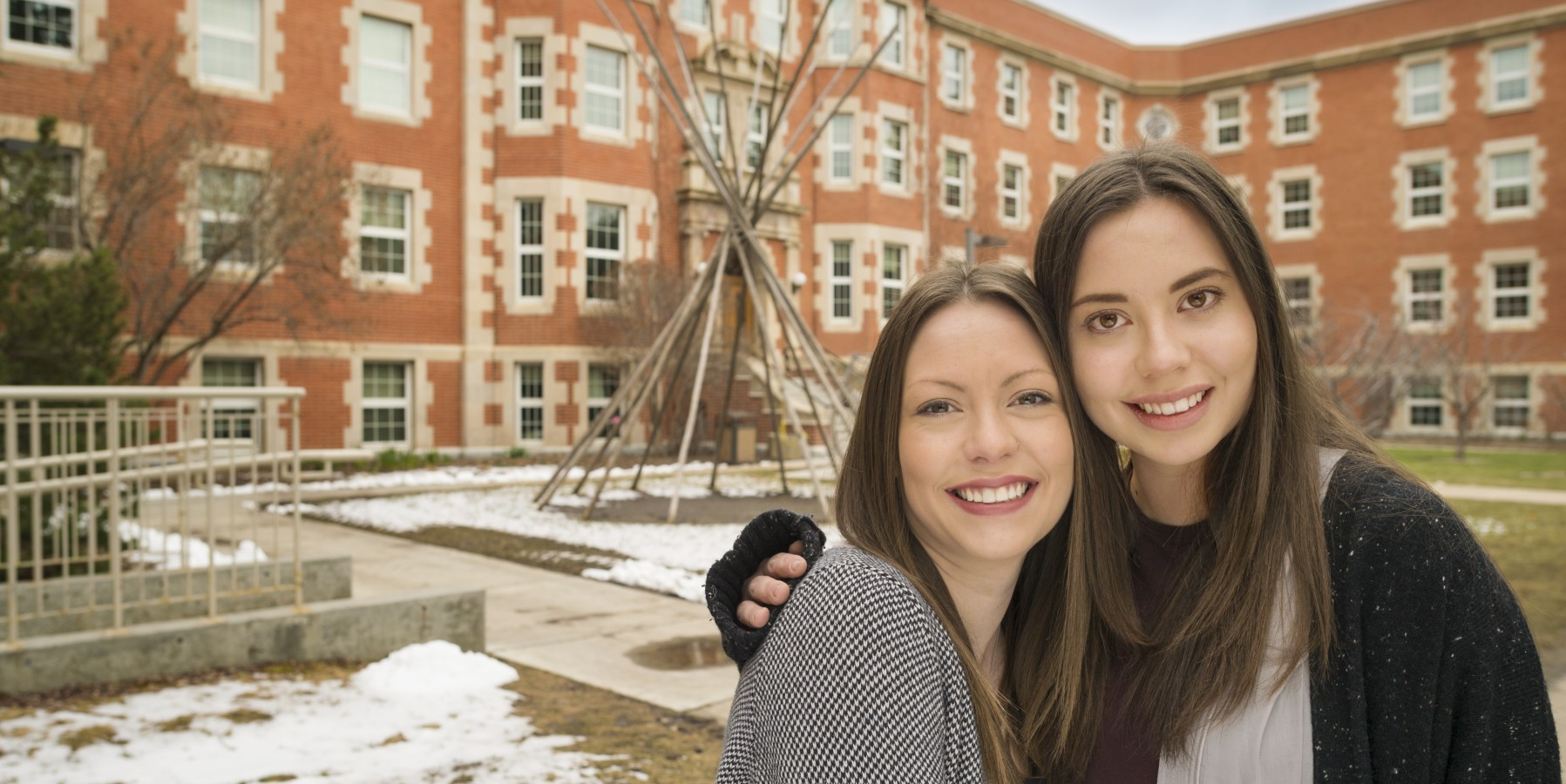 Domonique and Danielle Bourque, who were born while their mother was in her third year of nursing at the U of A, both graduated with nursing degrees of their own on June 12. (Photo: Richard Siemens)

You could say nursing runs in the family for twin sisters Danielle and Domonique Bourque.

Not only are they planning to break new ground in the profession by tackling awareness issues on behalf of Indigenous people—reflecting their own heritage—but they’re also following in the footsteps of their mother, Lisa Bourque Bearskin, who holds an undergraduate degree as well as a masters and a PhD in nursing from the University of Alberta.

Bourque Bearskin was in her third year as an undergraduate and six months pregnant with her daughters when she was put on bedrest until the twins were born. She went back to class when they were three days old.

“You could say they were born into nursing, and I think they’ve been very much gifted with the nursing spirit and I hope they can be true to that spirit,” she said.

The pair, 23, graduate with their degrees from the U of A June 12, and are proud to pass on their mother’s tradition of advocacy and caring to their future patients.

“We come from a family of healers,” said Danielle. “Our great-grandmother was a traditional midwife and medicine woman, and it’s unique that the tradition runs that far back and we are proud of that history. It’s in our blood, for sure.”

Their mother also inspired them through her own career, which spans more than 30 years working as a registered nurse, and included a dedication to teaching that saw her working with Indigenous communities in Alberta and Nunavut, as well as at the U of A, where she led the way in developing and delivering new Indigenous nursing initiatives.

Her daughters were there too, learning as they grew. As children, the pair spent time among the hustle and bustle of nursing while their mother worked in a health centre in Iqaluit, and when they were old enough, she kept them busy transcribing and organizing her research notes.

“We were her little helpers,” Domonique recalls. Slowly, the idea that they could also become nurturers and changemakers took root.

Both sisters plan to carry on their mother’s work of advocating for Indigenous knowledge in their chosen profession. Members of the Beaver Lake Cree Nation in northern Alberta, they see a crossover of shared values in traditional healing and nursing: mind, spirit, body and environmental wellness. “It’s about transcribing these into nursing,” Domonique said.

Danielle, inspired by her mother’s research aspirations, is starting a master’s degree this fall at McMaster University, with plans to focus on health equity; namely how to recruit and retain more Indigenous people in nursing programs.

Ultimately, she wants to create policies that fold Indigenous knowledge into community nursing, to make sure that some of the health care system’s most important front-line workers aren’t out of step with patients.

“Why are we using beliefs that don’t speak to Indigenous culture? There’s a lot of mistrust in seeking help with vulnerable populations and there can be tragic consequences. I want to concentrate on the social justice aspect,” she said.

Domonique also wants to make a difference, but for a more personal reason. As someone who deals with self-anxiety, she found herself sympathizing with distressed patients she’d nursed during her training. But she saw that they were sometimes stigmatized and believes that leaves them vulnerable.

“How caregivers look at patients matters. That judgemental aspect is why people don’t seek help.”

Increasing an understanding of mental health in their profession—and beyond—is a cause that has special meaning to both sisters, after the stabbing death of one of their classmates, Rachael Longridge, in 2016. The mother of the newly-graduated nurse now stands accused in the killing, and was reportedly struggling with mental health issues at the time.

“We always have it in the back of our mind,” said Domonique, who remembers what a supportive friend Longridge was to her. “(Her death) was 100 per cent preventable. Her loss really reminded us why we got into nursing, and we will always carry her with us.”

While busy at the U of A being students, the pair also took the opportunity to be teachers, and are grateful for the support they were given by their faculty to do that. Keen to raise awareness about the importance of Indigenous knowledge in nursing, they developed and delivered a powerpoint for first-year classes last year and attended a conference on mental health for circumpolar communities.

Bourque Bearskin hopes her daughters continue that passion for advocacy in their careers.

“I want them to teach people, to have the leadership skills to be able to question how we can open up doors to conversations about Indigenous people, continued colonization and create better ways that improve access to health care.

“These girls have inherited their grandmother’s gifts of giving.”