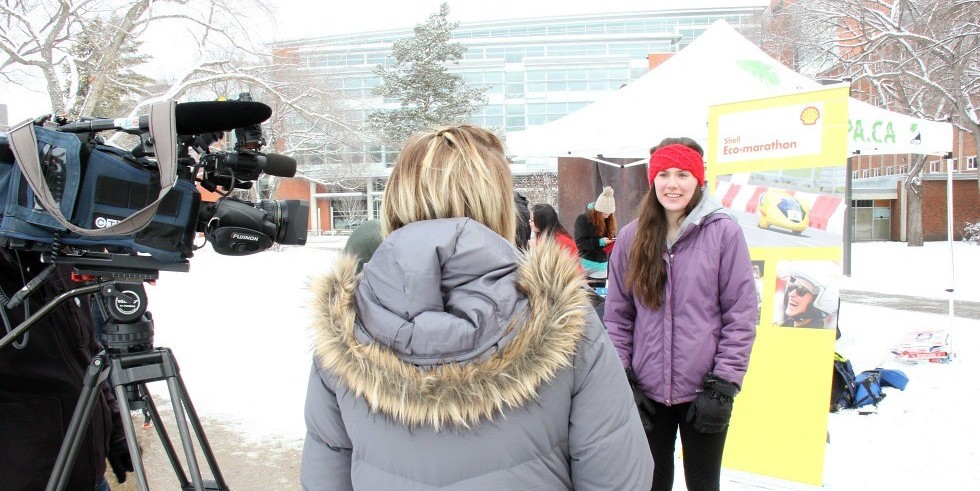 Engineering physics student Natasha Pye (right) gives a media interview about the U of A EcoCar. She played a key role on the EcoCar Team this year, earned a perfect 4.0 GPA and is one of two winners of the prestigious C.D. Howe award.

In her first year of engineering, Natasha Pye is already chalking up many great achievements. She earned a perfect 4.0 grade point average while taking on leadership roles in student-led initiatives and clubs.

To cap it all off, she’s one of the two students in all of Canada—both from the University of Alberta's Faculty of Engineering—receiving the prestigious C.H. Howe National Engineering Scholarship. The other recipient is electrical engineering student Brendan Calef.

The coveted award recognizes scholarly achievements and leadership skills and carries a $7,500 award per year for three years. Candidates are nominated by engineering deans across the country and selected by a committee of national college and university representatives.

“Just to be a U of A nominee is crazy because there are about 800 first-year engineers, and to be chosen as the one female nominee–and then be selected by the committee–it’s crazy to think about,” said Pye, who completed her first year of studies in French through the university’s French-language faculty, Campus Saint-Jean.

“I wasn’t expecting anything out of it. I was just in shock when I found out,” she added.

It’s second nature for Pye to reach out and share her interests, particularly for protecting the environment and raising sustainability awareness in the community. She’s the outreach and events co-ordinator with the U of A EcoCar team, treasurer and vice-president of Campus-Vert, a green initiative on Campus Saint-Jean, and is on the executive of the U of A Ultimate Club.

EcoCar is probably one of her biggest passions. Pye led outreach and awareness activities, delivered multiple presentations about the project in her high school and on campus, liaised with the media during the unveiling in March of the vehicle the students designed and built, and managed the crowdfunding campaign.

The team had its most successful year by far, winning first place at the Shell EcoMarathon Americas competition in the U.S., and then travelling to London, England, this summer to compete at the world championships.

Pye and the team are thrilled with their performance and are hoping to do even better things in the coming year.

“Next year, we want to do more outreach in the community and try to share with people what we’re doing– why sustainability and alternative energy, especially in transportation, could actually be a viable option in the future,” she said.

Pye started getting involved in clubs in high school as she advocated for offering vegetarian options at the cafeteria and organized bake sales, and fundraisers and the Earth Week activities.

“For me, leadership isn’t a role or a position. If I find something interesting, or I feel passionate about it, I just go and try to do something with it,” said Pye.

Even her summer job is pretty cool: having been accepted into the engineering physics program, she’s doing a research on titanium dioxide nanotubes under the supervision of Department of Electrical and Computer Engineering professor Karthik Shankar.

“I really don’t procrastinate,” Pye said of juggling her many interests.

“A lot of what I’ve learned is through other older students mentoring me, especially in the EcoCar team. There are definitely some great role models there. Now I want to give back.”