Brain develops abnormally over lifespan of people who stutter 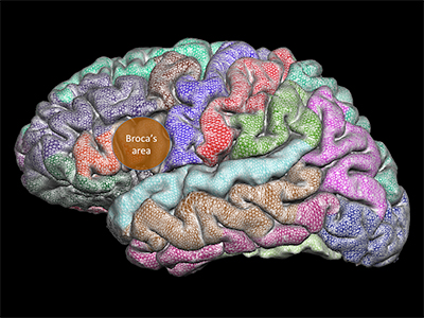 Broca's area (circle), the region of the brain responsible for speech production, develops abnormally in people who stutter. 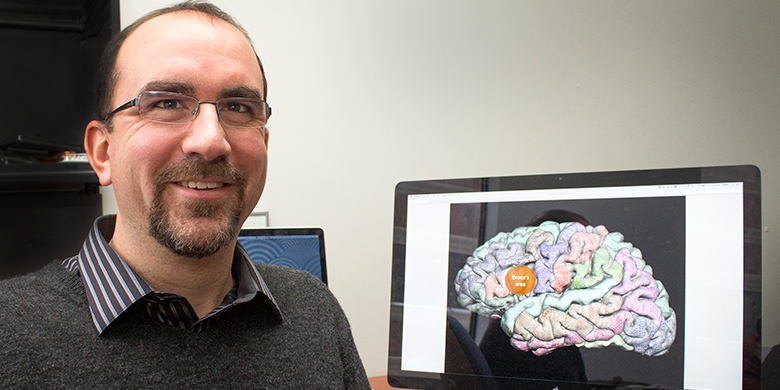 (Edmonton) A region of the brain thought to control speech production develops abnormally in children who stutter—a pattern that persists into adulthood, according to new University of Alberta research.

In the first study to use MRI imaging to examine brain development in both children and adults who stutter, researchers at the U of A’s Institute for Stuttering Treatment and Research (ISTAR) found abnormal development of grey matter in Broca’s area, the region of the frontal lobe responsible for speech. It was the only abnormality found in the 30 regions of the brain the research team investigated.

“In every other region of the brain we studied, we saw a typical pattern of brain matter development. These findings implicate Broca’s area as a crucial region associated with stuttering,” said Deryk Beal, ISTAR executive director and an assistant professor in the Faculty of Rehabilitation Medicine.

Beal’s team, which included collaborators from the University of Toronto, studied MRI images of the brains of 116 males between the ages of six and 48 years—both the largest group and widest age range for such a study. Roughly half the participants stuttered; the rest served as a control group.

Brain abnormality persists with age in people who stutter

The research team observed a steady, and expected, decline in the cortical thickness of grey matter in the control group—a decline not observed in people who stutter. This decline in thickness, Beal explained, is actually a good thing because it reflects how the brain gets more efficient as we age, requiring fewer neural resources.

“One interpretation of this finding could be that this area, in people who stutter, does not operate as efficiently within the brain network for speech production,” Beal said.

Though the results confirm that this region of the brain develops abnormally in people who stutter, scientists still cannot say definitively that Broca’s region is responsible for stuttering.

“It’s like the chicken and the egg,” Beal explained. “We don’t know if the changes we are seeing in this region of the brain are the result of a reaction in the brain to stuttered speech or some other difference in how the brain is operating elsewhere, or indeed if these changes are the cause of the disorder.”

Beal’s team previously discovered that children who stutter have less grey matter volume, a finding that was more like a “snapshot” in time showing how kids who stutter differ from those without the speech disorder. This newer research is a “huge improvement,” he says, like “having a flipbook of how the brain changes over the lifespan instead of just one image at a specific age.”

Beal said the findings support the need for an even larger long-term study of brain development from infancy to adulthood to look at how brain growth in speech areas differs between children who stutter, those who don’t, and kids who stutter and later recover.

“That will help us know how the brains of kids who stutter and recover change to help them cure themselves. We can then start to change our treatments so that they impact all kids in this way.”

The study was published in the journal Frontiers in Human Neuroscience in an early online release, and received funding from the SickKids Foundation, the Canadian Institutes of Health Research and the National Institute on Deafness and Other Communication Disorders.

Brain develops abnormally over lifespan of people who stutter
Newsroom