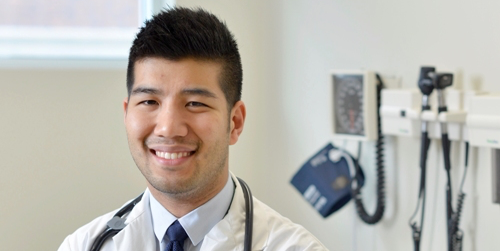 (Edmonton) Anthony Lott would be the first to admit his journey of sexual identity hasn’t been smooth.

“Being open about my sexuality was not easy for me when I first entered medical school,” says the fourth-year medical student in the Faculty of Medicine & Dentistry at the University of Alberta. “Coming out to my peers was a difficult process, but something that got easier with time.”

Lott attributes much of the breaking down of barriers he has accomplished in his time at the U of A to the support he has received from faculty, students and staff—so much so that he has become a leader in engaging the campus community to support people who are “non-heteronormative.”

As the recipient of the Michael Phair Leadership Award in 2011 through the Institute for Sexual Minority Studies and Services (iSMSS), Lott knows how important is it to focus on community-building as an LGBTQ advocate, however a person defines their community.

Lott says he won the award through his service as junior mentor at Camp fYrefly and involvement with the Medical Students’ Association’s Sexual Orientation & Gender Identity Advocacy Committee (SGA), a small group of LGBTQ students and allies who focus on providing a safe and supportive space within the faculty.

“It’s important to be a resource and a support for the community, and to serve as a patient advocate,” says Lott, noting that a lack of knowledge about specific health-care needs of LGBTQ patients can present a barrier to care.

“Physicians are leaders in their communities, so it’s nice to see leadership at such an early age,” says Kris Wells, director of programs and services for iSMSS and a mentor of Lott’s.

“We hope students step forward to build a more vibrant community and it’s our pleasure to support students like Anthony,” says Wells. “A measure of success of inclusivity can be seen by how visible a person is in being open about their sexuality.”

That idea is one D. Douglas Miller, dean of the Faculty of Medicine & Dentistry, says is reflective of the inclusivity and diversity within the faculty.

“Our students are supported in their challenges and their successes, and we want to provide an environment where they feel secure enough to focus on their education, without ever having concerns about whether their sexuality is a factor in their studies,” says Miller. “Like the SGA, under the auspices of the Medical Students’ Association, the Office of Learner Advocacy & Wellness has done a tremendous job in promoting a safe and inclusive environment, and the faculty as a whole promotes acceptance, tolerance and compassion, which are the touchstones of an welcoming environment.”

As Lott prepares to graduate, he says his experience has helped him be true to himself while growing into his physician role. “During my four years of medical school, I’ve never felt more supported and welcomed than from my peers here at the University of Alberta. My sexuality was never a barrier; rather, it was a welcome and celebrated diversity in our class's social fabric.”

Lott is particularly excited about his next project. “SGA has been working with the Institute for Sexual Minority Studies and Services to develop a conference, which will be on May 2,” he says. The conference, called Inclusive Health: An LGBTQ Health Primer, will focus on familiarizing people with LGBTQ health issues. For more information on the conference or SGA, email hello@uofasga.org.

“There is still a lot of work to be done to achieve equality for LGBTQ people,” says Lott, “but I hope that, by being out to my peers, I can challenge stereotypes, be a role model for LGBTQ youth considering a professional career in health care, and break barriers for future patients who won’t have to fear coming out to their physicians.

“I have confidence that our next generation of physicians are being trained to be not only competent as medical experts, but also compassionate and open-minded as human beings.”