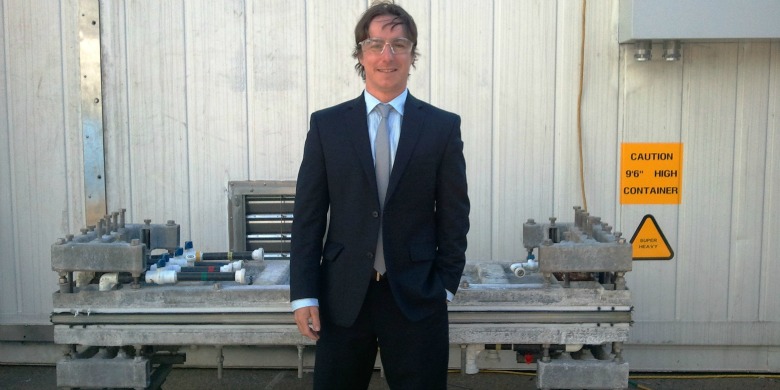 120920-bensparrow-banner
Ben Sparrow's innovative technology for water desalination and recycling is putting his company at the forefront of solutions to a global challenge.

(Edmonton) When Ben Sparrow accepts his University of Alberta alumni award Thursday night he’ll give a lot of credit to his mechanical engineering professors.

“The U of A’s mechanical engineering program was very good at teaching students to avoid one-sided thinking and really stressed consideration of alternative solutions to engineering problems,” said Sparrow.

Since graduating from the U of A in 1999, Sparrow has done a lot of thinking outside the box and that led him to co-found Saltworks Technologies, an engineering firm specializing in water treatment.

Sparrow says his Vancouver-based company’s main focus is water treatment solutions for industries like oil and gas production, but he has high hopes for a piece of Saltworks’s equipment that NASA could send into space.

“The International Space Station uses a conventional method to recycle water—basically it’s boiled and condensed—but they’ve had problems with calcium fouling up the equipment,” said Sparrow. NASA organized a global competition looking for better technology and Saltworks won a tryout. “NASA engineers have been testing our equipment for a few months now,” said Sparrow. “So far the results have been extremely positive.”

The U of A’s Alumni Award of Excellence will be the second honour for Sparrow in the last month. In August he was awarded the Queen Elizabeth II Diamond Jubilee Medal in recognition of the importance of Saltworks's technologies and significant innovations to Canada and its environment.

As CEO of Saltworks, Sparrow says his U of A education comes to mind when he’s comparing it with the credentials of the engineers who apply for work with his company.

“U of A’s engineering is definitely world-class when it comes to preparing students for industry.”

Sparrow will be one of three honoured U of A alumni at a panel presentation Friday afternoon as part of the Faculty of Engineering’s Alumni Weekend celebrations for students, faculty and staff.