New residence for St. Joseph's College will give nearly 300 female students at UAlberta a room of their own. 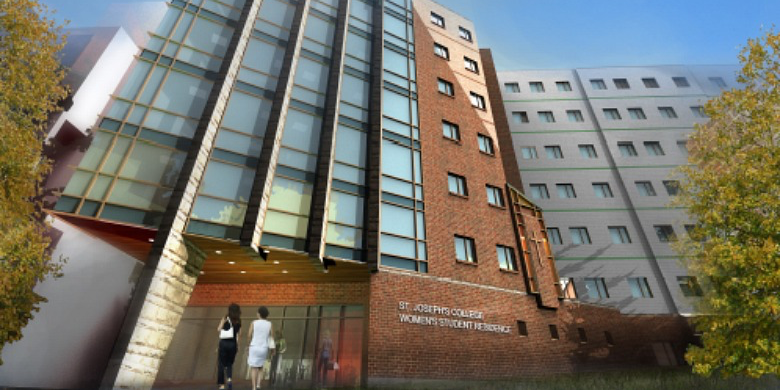 Artist's rendering of the new women's residence for St. Joseph's College, which will open in 2015.

(Edmonton) Emily Hoven will have graduated from the University of Alberta when the doors open in 2015 on a new women’s residence for St. Joseph’s College, but she knows students to come will enjoy their new home on campus.

Currently living in Kateri House, a string of stairwell apartments in HUB Mall that serve as the college’s 14-person all-female residence, Hoven, her twin sister and a handful of other women have made friends and made do in their surroundings, but a groundbreaking held Jan. 29 to welcome construction of a new 282-person building has them celebrating.

Gone will be the friendly but cramped potluck dinners spread out in a bedroom, followed by outings for frozen yogurt or some dancing. Instead, roomy common areas in the seven-storey building will give future generations of female students a more comfortable place to build friendships and campus memories.

“It will be nice for them to have a new building,” said Hoven, a third-year student in the Faculty of Arts who serves as president of the residence. “The way HUB is set up, all the bedrooms are in a stairwell, which isn’t really conducive to gathering together,” she said. “We make it work, but it’s a challenge. The new residence opens the doors to so many more students, so it will be a place for lots of friendships.”

The new residence is being built by St. Joseph’s Catholic College, affiliated with the U of A since 1926, and opens up more housing on campus, said Don Hickey, vice-president of facilities and operations for the U of A.

Located just south of St. Joseph’s College on the U of A’s north campus, the $35-million facility will house 282 female students of all faith backgrounds, with 24 single suites, 45 double suites and 39 four-bedroom units, along with common spaces and multi-purpose rooms.

“We are pleased to partner with St. Joseph’s College in such a beneficial project for University of Alberta students,” Hickey said. “This new building, in addition to enriching the campus experience for resident students, helps meet the university’s vision of providing on-site housing for 25 per cent of its full-time students.”

“We are excited to launch construction of this project, which offers a unique learning and living environment and enhances the values of social justice, service and friendship that St. Joseph’s College has represented for 87 years on campus and shares in common with the University of Alberta,” said Kersch, president of the college.

“As the new building takes shape, we look forward to having this residential community play a meaningful role in the personal, academic and spiritual growth of students,” he added.

The residence will house female U of A students of Catholic faith, some of whom are taking courses at St. Joseph’s College, and students of all other faith backgrounds.

Having grown up with three sisters—including a younger one who may attend the U of A and take up residence in the new building—Hoven says she likes sharing her space with other young women.

“To come to a similar living situation made the transition to university easier for me. I had a support system. When you first come to university and start thinking about new concepts, it’s nice to put those ideas into the context of your faith and to talk to other people about these questions.”

The new residence, with room for many more female students, “enhances the presence of women in the college and campus community,” she added.