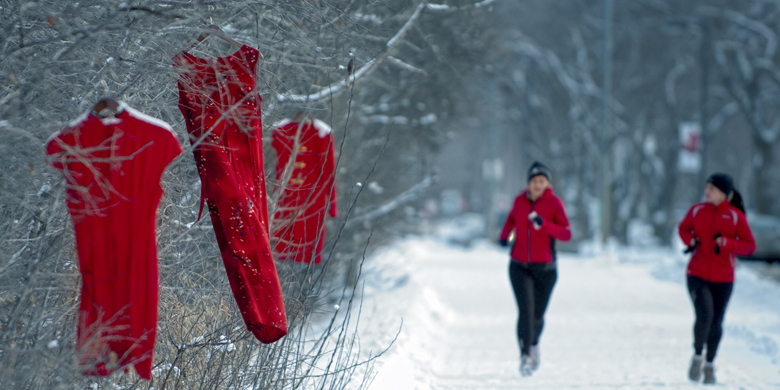 120309-redressbanner
Red dresses blanketed the campus as part of the REDress Project, which was designed to bring awareness to Canada's missing and murdered Aboriginal women.

(Edmonton) One hundred red dresses have been hung around the University of Alberta campus this week. Each dress is as unique as the woman it’s meant to represent, but they all share a common story. Together, the dresses make up an exhibit drawing attention to missing and murdered Aboriginal women in Canada.

“It’s not one sick person that’s doing this; it’s a social problem, and we all have a responsibility in it,” said Jaime Black, the Winnipeg-based Metis artist behind the REDress Project. “Violence against women is happening everywhere in Canada. It’s horrible, but it’s not surprising. It’s society that allows this violence to continue.”

Black says Aboriginal women face more violence than any other cultural group in Canada and that 50 per cent of the murder cases involving Aboriginal women are unsolved, compared to a solve rate 10 per cent for the rest of Canada.

“That means there’s a huge discrepancy in who has been taken care of, and who has not, through the policing system,” Black says.

Black says she tries to bring about dialogue around social and political issues through provocation and by creating space for reflection. She says the project is an aesthetic response to the more than 600 reported cases of missing and murdered Aboriginal women in Canada.

“Through the collection and public display of empty red dresses, the installation seeks to draw attention to, and create space, for dialogue around the gendered and racialized nature of violent crimes against Aboriginal women,” Black says.

Pippa Feinstein, a U of A law student involved with the exhibition, says there’s a need for dialogue.  “Unfortunately, there’s a lot of reluctance in Canada to discuss the colonial heritage and legacies that are still going on. The last residential school in Canada closed in 1996, so the colonial history is very present, but it’s often swept under the rug. It’s a silence that we felt needed to be broken.”

Feinstein says the different dresses help to address a common mainstream media message about the missing or murdered Aboriginal women. “The media says a lot of the women that do go missing are usually either sex trade workers or living on the streets, and there’s this feeling that they’re a lot less valued because of that—that’s just their lifestyle,” she says.  “But there’s a lot of diversity to the dresses. Some were worn by older women, some by children. These were mothers, sisters, daughters.

“It’s difficult to connect with statistics or connect with discussions about these systemic problems.  It’s easier to connect on an emotional level and just see them as women. It could be me; I could be missing and I think about what that be like for my family, my friends.”

Black says the violence her work seeks to address comes from systematic racism and sexism. She says it’s an issue the public could help deal with.

“It’s really important that we speak out about that, all of us, and we continue to support as much as we can families, communities, Aboriginal people, anybody, to eliminate that racism and band together between communities.”