Breaking the stereotypes of disabilities

Daniel Ennett doesn't believe that managing his disability makes him inspirational, but he wants to know why we think it does. 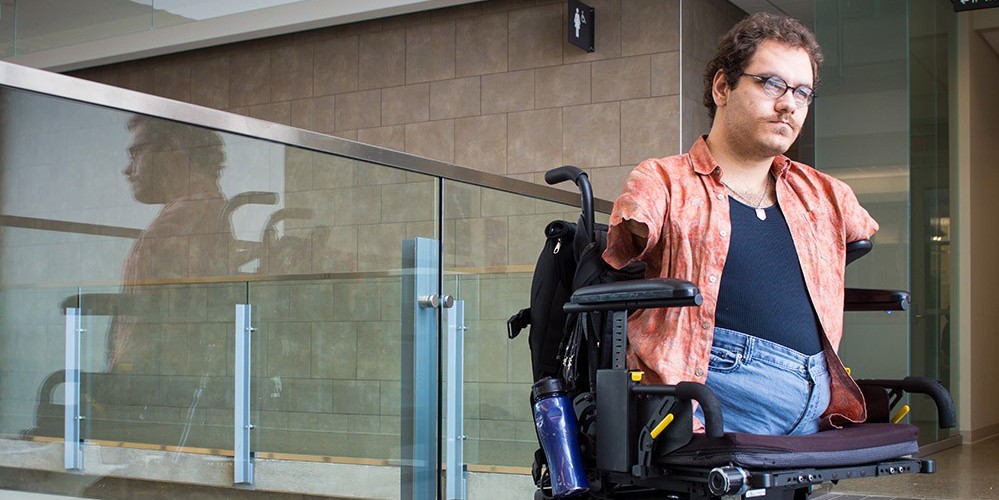 All images: Christine Varvis (The Gateway)

Daniel Ennett doesn’t want to be seen as an inspiration, at least not for something he considers unexceptional. Ennett is a quadruple amputee, the result of childhood meningitis. He does not believe that learning to manage his disability makes him extraordinary; it is something he has lived with for most of his life. However, the third-year psychology major does believe the attributes we ascribe to people with disabilities are extraordinary, or at the very least, worth studying.

Talk to almost anyone with a major or even minor disability, and they will tell you that at some point, they have been called brave or inspirational—terms that (however well-intentioned) turn individuals into one-dimensional stereotypes.

There is a weariness in Ennett’s voice (punctuated by moments of expletive-filled humour) as he recounts stories of the unsolicited attention (mostly religious) that comes his way on a nearly daily basis. But he admits that these types of interactions have also inspired his academic interests. “I am acutely aware of social situations,” says Ennett. “That might be why I’m attracted to psychology. A big part of it is trying to figure out what motivates people. I want to know why people make the attributions they do.”

According to Ennett, several factors play into our objectification/beatification of disabled people, including a phenomenon called immune neglect, or the tendency to overestimate our inability to overcome trauma. “People are really shitty at predicting how much an event will affect them in the future,” says Ennett. “They think that a devastating event will be even more devastating than it is, when in reality humans are very adaptable.”

Ennett has proven his adaptability throughout his life, but never more dramatically than in his work with Telus Optik’s documentary series Invincible. Over two seasons, Ennett served as host and frequent participant in the series, which explores the challenges faced by Canadians with disabilities. He credits the show with helping him to fulfil a “bad case of wanderlust,” by sending him into the water (sailing, scuba diving), the rink (curling) and the ski hill, where he was strapped to (and nearly fell out of) a ski lift. Ennett also explored his artistic side at the Nina Haggerty Centre for the Arts—skills he had previously developed as a painter of miniature video game models. Ennett is even thinking about skydiving, “if someone,” he laughs, “can guarantee me a 75 per cent-plus survival rate.”

Next year, Ennett will be transferring into the honours program in psychology, and with an eye to grad school, he will be focusing on attributional theory in relation to people with disabilities. One thing he wants to make clear: his interest is in social psychological research, not therapy. “I experience something I call ‘instant rapport,’” says Ennett. “People see me and think, 'Look at what you’ve gone through,' and then it kind of forms a bond. And then when they find out I’m in psychology, they instantly go, 'Oh, you’d make a good psychologist.’ But that’s actually the ed psych department [at the U of A] that runs the clinical psychology program.

“There’s a strong groundwork in the study of disability, and I want to find out how I can add to the dialogue.”

Breaking the stereotypes of disabilities
Newsroom