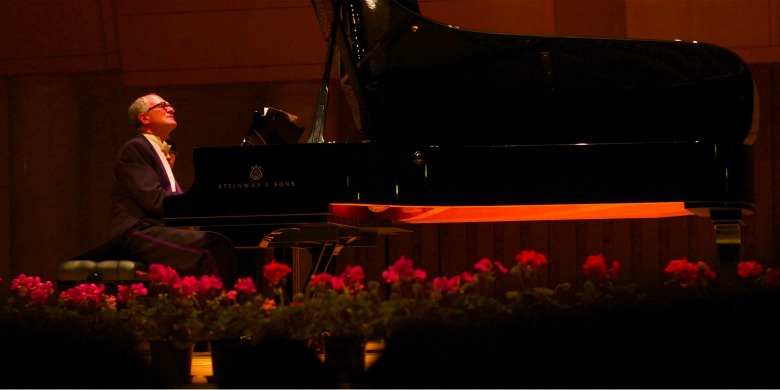 120427-depres-banner03
U of A music professor Jacques Despres is giving piano recitals at two of China's most distinguished concert halls.

Després will also use the invitation to share his expertise on the French composer Claude-Achille Debussy, regarded as one of the most famous and influential composers.

“I feel very fortunate because there are not a lot of people who could be invited to recite at these halls. It’s a privilege to play at the Wuhan concert hall because some of the world’s famous musicians have played there. It’s one China’s main concert halls,” Després says.

“I’ve been working very hard on bringing Debussy into my repertoire, and they want me to play his works.”

One hundred fifty years ago, Debussy was born in France to parents who were removed from the classical music tradition. His father was a store owner, his mother a seamstress. But despite his modest background, Després says, Debussy was an extraordinary composer with a global outlook.

Imprints of Debussy’s worldview began appearing in his works after an event that brought much of the world to Paris in 1889. Després says some 34 million people, including musicians, went to Paris for the Exposition Universelle.

“There were people from everywhere and these cultures brought with them art as well as music. It really inspired Debussy to use some of these sources and incorporate them to make his music varied and appealing. His influence has been tremendous,” Després says.

A century and a half later, Després brings the world through Debussy’s works to China, where he says the classical music tradition is growing. This is not the first time he’s doing so. He honoured an earlier invitation to teach a master class at Beijing’s Central Conservatory and give a recital of Debussy’s Préludes at the Beijing Concert Hall. This time, he will also lecture on Debussy. He says the appetite for his work in China is recognition of the university’s standing.

“Invitations like these are important for the university because it shows that outside organizations are betting on me. They think I’m worth their investment and that the audience will like my performance. It’s a great responsibility in that sense because if they believe in me, it means they believe in the university,” Després says.

Després is one of several U of A scholars who have been well received in China, as the university continues building bridges of co-operation that foster, enhance and develop research with academic partners worldwide.

The university’s China Institute is one of several vehicles being used to strengthen connections with the global community, as the university delivers on its responsibilities as a global steward. Gordon Houlden, the institute’s director, notes the importance of cultural connections such as the one being developed by Després.

“The China Institute was created in response to the cultural interest in China of Sandy and Cécile Mactaggart, who are avid collectors of Chinese arts and textiles, which are now at the university,” Houlden says. “Cultural linkages are essential to a balanced appreciation of Chinese civilization and Canada should, along with exporting its resources and industrial products to China, bring its artists, arts and culture to the Chinese people.

“So the contribution Jacques would make in this regard is valuable because this university puts great importance on its international responsibilities, and often that can be best expressed through culture, including music. Culture can pass seamlessly through the barrier of language.”

As Després plays Debussy’s Preludes book 2, along with works by Beethoven and Liszt, he will be bridging distinct cultures through music. He says his performance is a reflection of the calibre of scholars at the university.

“Whether it’s teaching or performing, if they love it, it reflects very well on the university. And it shows that at this university we have people who are of a certain worldwide level,” Després says. “At this university, we’re not only at the cutting edge of research, we’re also able to bring what made Western art so important in the performing tradition.”