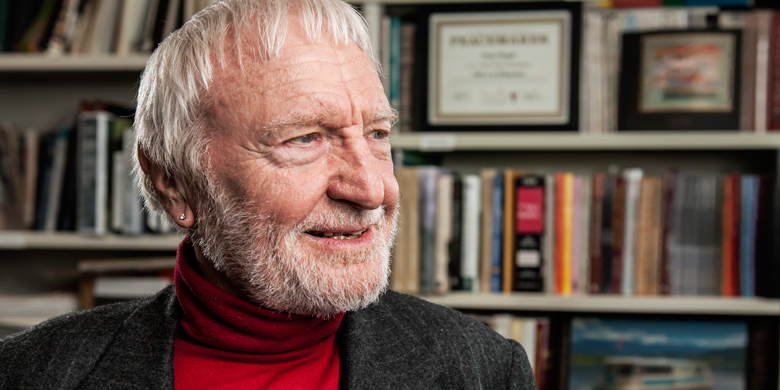 130129-earlewaugh-banner
Earle Waugh, director of UAlberta's Centre for the Cross-Cultural Study of Health and Healing, will speak about Aboriginal medical practices and traditions Jan. 30 during International Week. (Photo: Richard Siemens)

(Edmonton) Chances are your family doctor makes few referrals to a shaman, but when it comes to putting patient needs first, western medicine and traditional healers share some common ground, says the head of the University of Alberta’s Centre for the Cross-Cultural Study of Health and Healing.

Earle Waugh and his colleagues at the centre are exploring ways in which western medicine and traditional healers can coexist and complement one another to treat Northern Alberta’s Aboriginal population. It’s an exercise that has its share of barriers, but a belief in patient-centred care is not among them.

“Biomedicine has to be a little more humble in its perception of itself and what it can do,” said Waugh, who will speak about Aboriginal medical practices and traditions Jan. 30 as part of the U of A’s International Week.

“If a sweat does more for someone to rid them of a cold or the flu than a pill, then maybe you should listen to the patient who says, ‘I want to do this because this helps with my healing.’ That makes the patient a partner in the healing practice—that’s a traditional medicine structure.”

It’s Waugh’s hope that western medicine can move beyond an attitude that looks down on other systems of medicine to help treat patients and build bridges with people who don’t accept our “superiority complex” when it comes to western treatments and structures.

“I don’t think we have any option, because the health record of Aboriginal people is appalling,” he said. “It’s not good enough for us to say there are some reasons we can’t put our finger on that Aboriginal people don’t take their pills or don’t do this—that’s a blame game. Let’s create a healing environment that is traditionally acceptable, based on a collaborative environment, that will give, we hope, a much greater buy-in for the population.”

Waugh, who was honoured in 2011 by the Plains Cree Aboriginal community when he was given the name “Pewapiskimostos,” or Iron Bull, will be joined Jan. 30 by Nigerian pharmacist Olatunji Obidiya. The pair will shed light on traditional healing from around the globe—practices that are diverse, culturally specific and often secretive.

“Part of the power of traditional medicine is the secrecy—you keep this between us and this is an experience that we’re having together. There’s a very special kind of connectedness to traditional medicines that we don’t have in western medicine,” Waugh said.

Though many traditional healing practices often appear to be “diametrically opposed” because of cultural differences, they do share commonalities such as an emphasis on the healing properties of plants. But unlike western medicine, traditional medicine sees plants as more than ingredients to harvest.

“Humans and plants are connected at a deep spiritual level and that’s why plants can be beneficial to you,” he said. “From a traditional medicine point of view, plants may be more powerful than we are.”