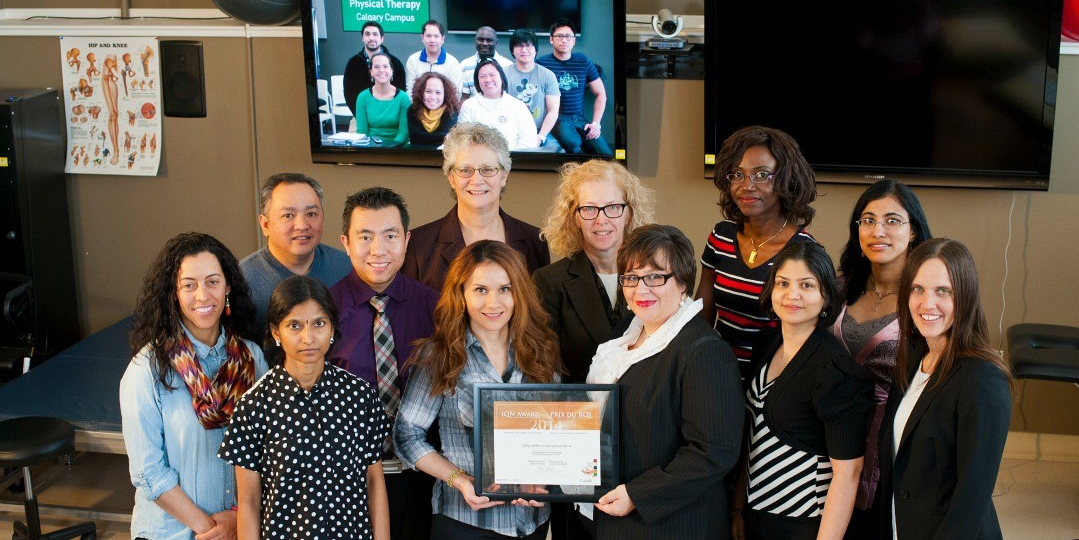 The first graduates of the award-winning Alberta Internationally Educated Physiotherapists Bridging Program are ready to take up practice in the province. (Photo: John Ulan)

(Edmonton) A University of Alberta pilot program that addresses the province’s growing need for trained physical therapists has produced its first crop of graduates who are ready to enter the workforce.

Fourteen students completed the inaugural year of the Alberta Internationally Educated Physiotherapists Bridging Program. The pilot program, a partnership between the Faculty of Rehabilitation Medicine and Physiotherapy Alberta - College + Association, gives internationally trained physical therapists the educational and clinical experiences they need to practise in Canada.

“Every year there are between 600 and 800 internationally trained physical therapists who apply for credentialing to practise in Canada,” explained Britton. “So, we have a pool of people who have the potential to work but cannot, largely because they lack experience with Canadian physiotherapy practice and the health system in general. Our program helps address this knowledge and skills gap.”

Health Canada provided funding to Alberta Health for the pilot, which features a combination of on-campus labs in Edmonton and Calgary, online modules and six weeks of hands-on learning with clinical mentors. The program prepares students for credentialing exams, helps them acclimate to Canadian culture and gives them valuable experience for the day-to-day realities that come with practising here.

Co-director Barbara Norton said despite their training abroad, many students coming into the program lack familiarity with key concepts of physical therapy care in Canada such as client-centred care, autonomous practice, clinical reasoning and decision-making, not to mention a wider understanding of Canadian health care.

“Some students that come from other countries have a very similar educational background but they always have a gap in the Canadian practice,” Norton said.

For Susana Braden, completing the program marked a new milestone in a 16-year journey that started in her native Colombia, where she spent five years training to become a physical therapist. A month after convocation, she decided to move, on her own, to Canada where she eventually hoped to practise in her chosen field.

Once she became more comfortable with her English, she started volunteering at a continuing care facility in rehabilitation, gaining confidence until she eventually found work as a physiotherapy assistant at a private clinic and studied on her own to improve her skills.

After Braden twice failed the national physiotherapy competency exam—students only have three chances to pass—she realized she needed additional help to get on the right track. That’s when she heard about the bridging program and soon was introduced to a dozen peers from around the globe—countries such as the Philippines, Nigeria, India and Brazil.

Despite the range of cultures, the students found common ground and quickly gelled, often dedicating extra Saturdays or workdays to study and brush up on their clinical skills in Corbett Hall, Braden said.

“It actually felt really good, like a family. We established a solid friendship knowing we had so many differences between cultures, but at the same time we were in the same position.”

The response to the course from the first cohort and additional applicants has been positive, said Dianne Millette, registrar with Physiotherapy Alberta - College + Association. Enrolment increased in the second year to 20 students, and the program is likely to expand to Saskatchewan next year.

The program also won a 2013 Special Merit Award from Citizenship and Immigration Canada.

“The strength of this program, other than hopefully the success of the candidates in their future careers, is really due to the vision that faculty and staff in the Faculty of Rehabilitation Medicine have had about what that instructional design would be for this type of learner,” said Millette. “I think that’s what has made this program so wonderful.”

Toast to the future

On Sept. 14, the 14 students came together again to celebrate the end of their year of classroom studies and to toast the future. Like many of her classmates who recently passed the written exam, Braden can now practise in her field under the supervision of a licensed physical therapist, but she still has to complete her clinical exams—something she hopes to do next June after spending a little more time in the clinic.

Sixteen years after leaving her native country, juggling several jobs while studying and raising two boys with her husband, Braden is closer to her dream of becoming a physical therapist. In fact, she had her first job interview late last week, something she credits to her instructors, mentors and peers in the program, as well as strong family support.

“The bridging program has opened up new doors that I never had before. I walk away not only with new knowledge and skills, but also with new contacts and friends that I never would have had the opportunity to meet.”