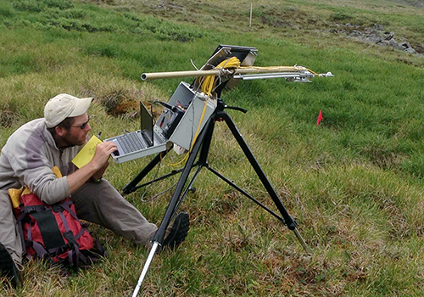 Reflective shrub canopies may reduce the impact of warming in northern mountains.

Scott Williamson collecting field measurements of albedo and spectral reflectance in the southwest Yukon tundra during the summer of 2013.

Rapid warming in northern mountain environments is resulting in both reduced snow cover and expanding shrub growth—but there’s a bright side to all this, according to new research from the University of Alberta.

Other recent studies have shown that spring snow cover duration in the Yukon has decreased by about 11 days per decade over the past 50 years. Because the highly reflective snow cover acts as a shield against solar energy, the advancing snow melt exposes more of the relatively dark tundra underneath, thus compounding the warming effect.

“The significance, and what was surprising, is that our results indicate that vegetation changes over the next 50 years are unlikely to have a large effect on Arctic energy budgets.”

In addition, over the same period shrubs have also advanced into these newly exposed tundra communities, further altering its albedo (the reflectivity of the area’s surface). These shrub-covered areas were expected to have low albedo—absorbing more solar energy—throughout the growing season, since shrubs and tundra in general are relatively dark compared with snow.

“The worry was that as the tundra warmed and increased in shrub vegetation, it would absorb more solar radiation, which would cause more warming,” explains Scott Williamson, post-doctoral fellow in the Department of Biological Sciences and lead author on the new study. “But what we have found is that this solar energy was increasingly reflected by shrubs during the growing season as canopies became denser.”

Instead of amplifying the warming effect, this summer increase in tundra albedo actually appears to counteract the earlier spring snow melt on land surface energy balance by about 40 per cent, mitigating concerns that the increased shrub growth over the next few decades would absorb more solar radiation and cause even more warming. These findings demonstrate that such magnified warming effects may be less likely.

“The significance, and what was surprising, is that our results indicate that vegetation changes over the next 50 years are unlikely to have a large effect on Arctic energy budgets,” Williamson explains, adding that future studies of the dynamics of Arctic surface albedo will need to take this process into account.

The research team used a portable apparatus to measure the albedo of alpine tundra vegetation during the growing season, looking specifically at the canopies of two common alpine shrub species in the Yukon—dwarf birch (Betula glandulosa) and tea-leaf willow (Salix pulchra). The dwarf birch was found to absorb less solar radiation, and therefore had a higher albedo than the willow.

Increases in albedo were largest for shrubs with closed canopies, where solar radiation could not as easily penetrate into the interior of the canopy and get absorbed. The changes observed on the ground were also evident from remote sensing observations collected by satellites, which show that a small amount of shrub cover could have large effects on broad-scale albedo.

“The role of shrubs in facilitating future climate change will depend on how quickly shrubs will expand into tundra, and which species will become most abundant at the expense of other land cover types,” says David Hik, biological sciences professor and co-author on the study. “These changes may also influence how other species, such as Arctic ground squirrels, collared pikas and invertebrate herbivores will respond to future warming.”

Their study, “Phenology and species determine growing-season albedo increase at the altitudinal limit of shrub growth in the sub-Arctic,” was published this week in the peer-reviewed journal Global Change Biology.