Bringing forgotten women back from the margins 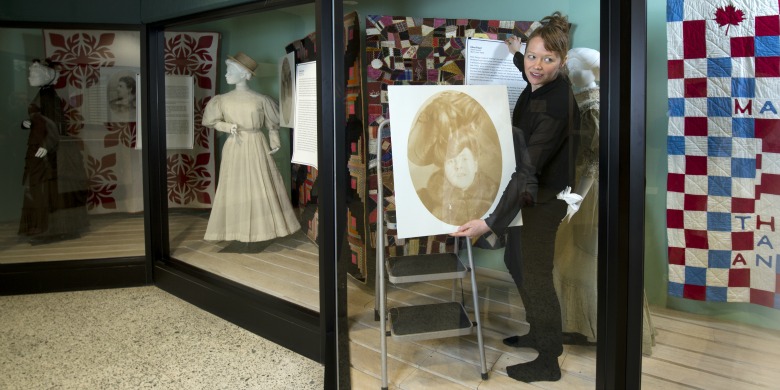 120913-lauriebertram-banner
Laurie Bertram, curator of the 'Pioneer Ladies (of the evening)' exhibit, prepares to showcase a mug shot of Edna Floyd, a fashionable madam who did business in Winnipeg in 1904. (Photo: John Ulan)

(Edmonton) Chin tilted, eyes challenging the camera, Edna Floyd sports her furs and fabulous feathered hat like a queen. Never mind that the photo she is sitting for is a police mug shot.

Floyd, a fashionable madam who did business in Winnipeg in 1904, doesn’t appear fazed by her arrest—and it was her fierce beauty that transfixed Laurie Bertram, curator of a new show, Pioneer Ladies (of the evening), opening Sept. 13 in the University of Alberta’s human ecology gallery.

“Floyd should be commemorated just for looking like a million bucks. She showed real resistance to victimization, and I was so impressed by her,” said Bertram, who is also a Grant Notley Memorial Post-doctoral Fellow in the U of A’s Department of History and Classics.

Using quilts, women’s clothing and other representational artifacts borrowed from the U of A’s clothing and textiles collection, Bertram is bringing them into conceptual focus with police mug shots of women she gleaned from museums and archives. The end project is being used to tell the story of marginalized women of Western Canada from 1878 to 1916—and to challenge contemporary thinking about today’s missing or murdered women.

“We can reflect on the kinds of history we promote and be critical about who we are remembering and why, and what possibilities that can bring for the future. This show is a kind of response to the spectre of missing women in Canada,” said Bertram.

The sex trade was an assumed part of the social landscape as the Canadian West was settled and as the country moved into the First World War, but the stories of the women who were involved have gone largely untold and unheralded, Bertram said.

She hopes that the exhibit reinforces the idea that these women are worthy of remembrance, because of how they dealt with their circumstances.

“Women on the margins were and are some of the most important people in society,” she said, “and we lose so much when we lose them and we gain so much when we honour them for their courage and heroism.”

Bertram was first captured by the topic while conducting other research. She stumbled across the written account of an Icelandic woman who had been hired as a housemaid, and was arrested in 1878 for causing bodily harm. When her employer, a madam, withheld her wages to coerce her into prostitution, the maid beat the madam with a broom, and was arrested by police. Fascinated, Bertram searched for the woman’s mug shot in the archives of the Winnipeg Police Museum, and came across several others, including photos of African-Canadian women, who had been arrested for theft, prostitution or other offences.

The silent gallery of women—some dishevelled, some elegant like Edna Floyd—was richly compelling for Bertram.

The exhibit is built around 11 mug shots, six with major profiles, and four featuring Alberta women, including “Big Nelly” Webb, an Edmonton madam who gained notoriety in 1888 when she shot an off-duty police officer in self-defence, and was acquitted.

The artifacts in the show reflect the circumstances or personalities of the women; in the case of Big Nelly, who had initially been driven from Edmonton, Bertram chose a quilt that was red and white like the Canadian flag, but had explosive bursts in its pattern. “It’s a very literal connection to her story.”

Clothing was also chosen from the university’s extensive collection to reflect the women’s personal style. “I researched each woman’s time period, looked at what they were wearing in their photos and then chose matching clothing to fit their styles, to honour their images of personal expression and ambition.”

But fashionable or not, the women symbolized a problem that is all the more distressing because it is becoming the norm in society, Bertram noted.

“There are thousands of women who have been murdered or have disappeared in the last 100 years. There seems to be this growing acceptance that this is a normal part of Canadian life, and I find that unacceptable.”

Bringing forgotten women back from the margins
Newsroom