Bugs could be key indicator of reclaimed soil health

If PhD candidate Stephanie Chute-Ibsen is right, invertebrates will provide a more complete picture of soil health that could change industry standards. 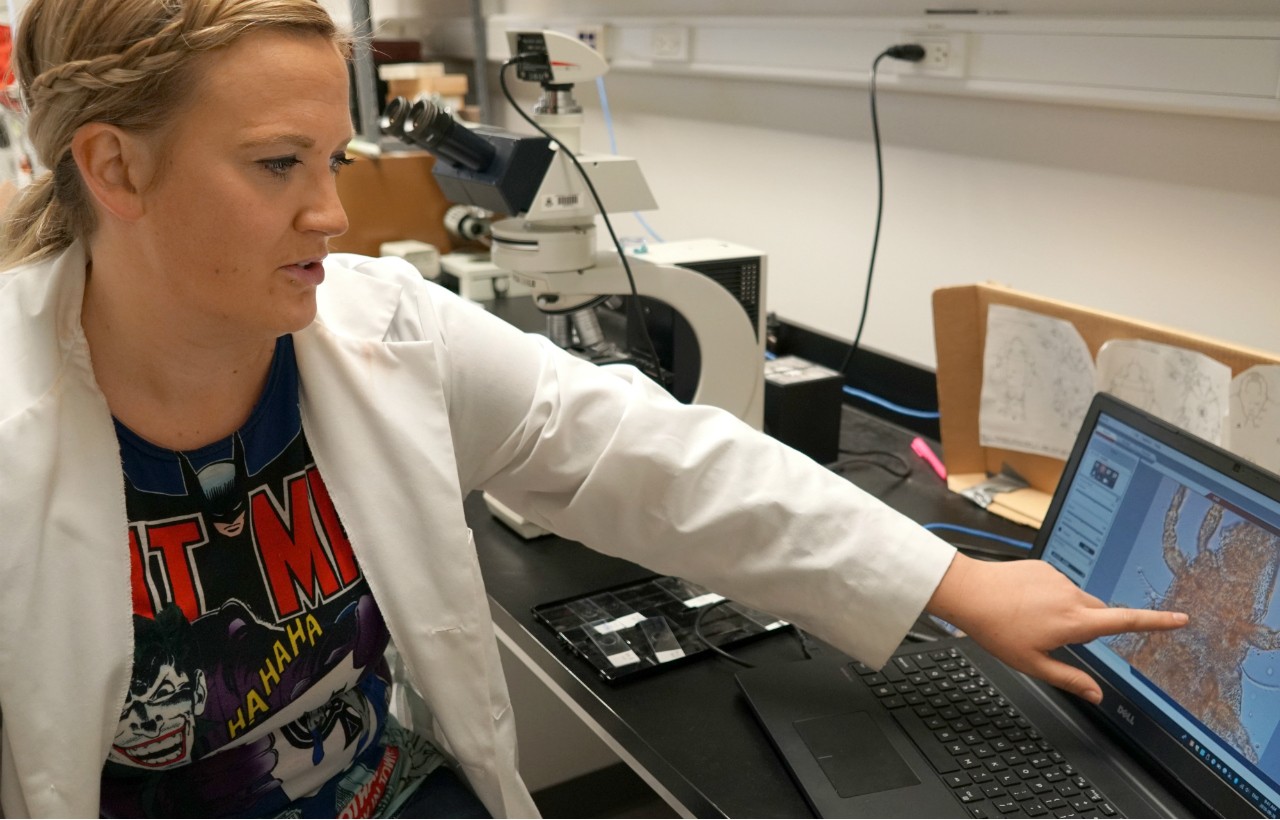 Stephanie Chute-Ibsen is looking at whether invertebrates like insects, arachnids and worms can indicate the health of reclaimed land. Her research could provide new ways for industry to determine how well reclamation efforts are working. (Photo: Kenneth Tam)

When assessing the health of reclaimed land, look for the bugs, says a University of Alberta land reclamation researcher.

Current industry standards examine the soil and its vegetation to assess the health of a site that was disturbed—such as a mine or oil or gas well—and reclaimed.

Invertebrates—including insects, arachnids and worms—are selective about the soils they choose to live in, and their absence can be a sign of soil health problems, said Chute-Ibsen.

“We can replace the soil, add the right vegetation, and superficially the site can appear acceptable, but these invertebrates keep the ecosystem healthy, stable and resilient enough to withstand environmental pressures over time.”

Invertebrates contribute organic matter that affects soil fertility, aids in soil structure formation and affects the availability of resources for other organisms including plants and microorganisms, she explained. Without them invasive pests can move in, endangering a site’s health. Unfortunately, their tiny size makes monitoring their populations a challenge.

“This hasn’t been widely studied because it’s a lot of work,” she said. “Collecting the samples can be hard work, but the worst part is that when you get 400 mites out of a sample, you have to identify them one by one.”

When extracted from a soil sample, a few types of invertebrates are large enough to be categorized on sight, but most have to be made into slides so their biological family can be determined.

That meticulous process involves specially gluing them to a glass slide in a certain position so specific features are visible, then curing them. After they’ve been prepared, each one has to be checked under a microscope.

Chute-Ibsen’s research is examining whether it’s worth the effort.

Chute-Ibsen is in her second year of collecting samples at the Westmoreland Coal Company Genesee Mine, 80 kilometres west of Edmonton.

“They take reclamation very seriously and have been so supportive,” she said. “We get access to our reclamation sites every month, and compare them with a nearby forested site that wasn’t disturbed by mining operations.”

To gather the invertebrates, she uses two methods: pitfall traps, and litter and soil core samples containing live specimens. The pitfall traps are simple plastic deli containers placed in holes and left for one week, capturing all surface-dwelling invertebrates. The litter and soil core samples are taken to the Royal Alberta Museum, where she uses special equipment to gradually heat them from top to bottom, forcing the invertebrates out so they can be counted.

In addition to these samples, she assesses the soil and vegetation, which allows her to see how the sites would be rated based on current conventional metrics of land reclamation.

“It’s possible that there is enough correlation—that monitoring the soil and vegetation will give us a good indicator of the invertebrate populations,” she conceded. “But I’m betting there’s more going on in the soil than we know.”

It will be a few years before Chute-Ibsen can publish any conclusions about the importance of measuring invertebrates. If she does conclude that monitoring those populations is important, the finding will be the beginning of a lot more work.

“Many industries are taking land reclamation very seriously,” she said. ”With the climate changing and extreme weather events happening more regularly, we need to give them the best possible tools to know whether their reclamation investments are paying off.”

Bugs could be key indicator of reclaimed soil health