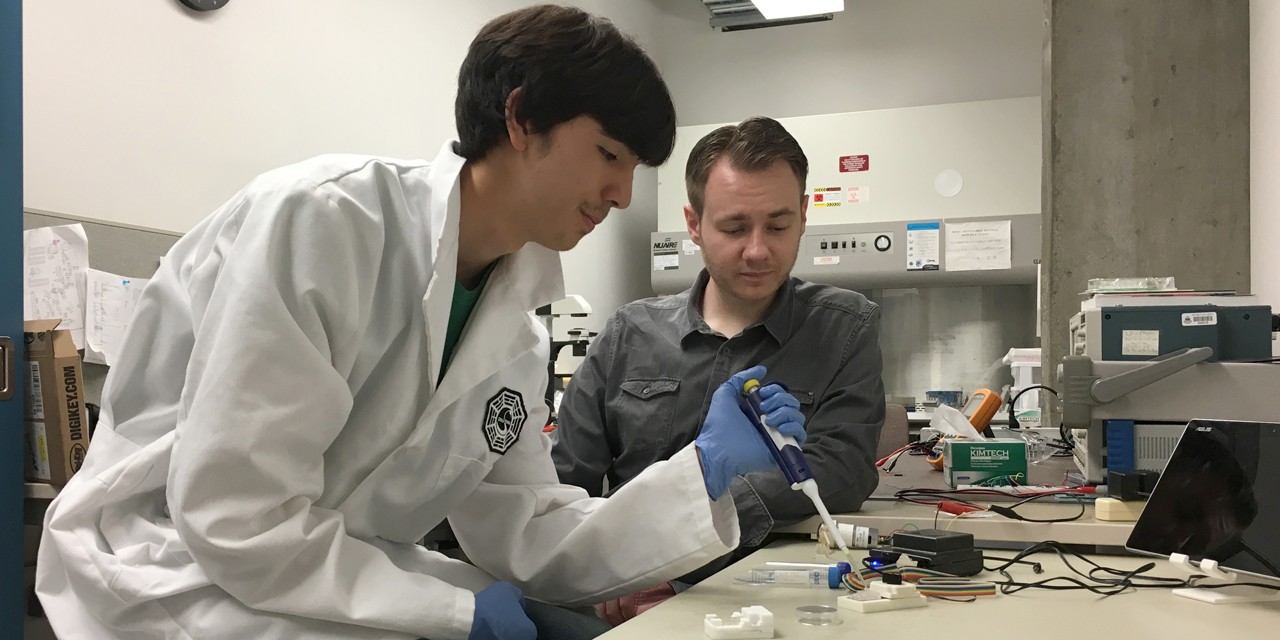 It’s an unassuming little gadget—a simple black box trailing coloured wires. But hooked up to a tablet and put to work in the middle of a canola field, a biosensor being crafted by a University of Alberta engineering team is generating excitement.

Surrounded by a group of curious farmers and crop scientists, U of A student Marcus Tamura put the device through its paces at a recent demonstration near Vegreville, in the heart of growing country in east-central Alberta. The goal was to demonstrate the diagnostic tool farmers can use to detect early stem rot disease in canola—one of the province’s biggest cash crops.

“They definitely were aware of stem rot and I don’t think they’d ever considered there might be an early warning system being developed,” said Tamura.

The disease, known as sclerotinia, causes white mould and is spread by airborne spores which are hard to detect before treatment is too late. In 2010, up to 90 per cent of crops in Western Canada showed signs of the disease, according to the Canola Council of Canada.

Tamura, a third-year undergraduate student in the Faculty of Engineering and a member of professor Jie Chen’s lab, is part of an extensive team of chemists, biologists and engineers working to create a biosensor that is portable, inexpensive and can be widely used, on the farm and beyond.

They are working with InnoTech Alberta scientists based in Vegreville to see if the biosensor can be tweaked enough to pinpoint the one or two types of troublesome spores that need to be caught early. Supported by the Alberta Crop Industry Development Fund, the project could have real reach; potentially, several biosensors could be stationed around a growing crop and monitored daily for results.

During the Vegreville field demonstration, Tamura was peppered with questions from farmers eager to start using the biosensor. “They were wondering how soon the technology would come to market, how much it would cost and how easy it would be to use.”

But the agricultural community isn’t the only one that can benefit from building a better biosensor. The researchers are also running trials that include detecting E. coli for a water-monitoring project in India, bowel death for those with gut disease or trauma, and lung cancer.

While a standard version of the device—which translates something biological in the body into a measurable signal to indicate disease—costs tens of thousands of dollars, the idea is to make that technology far more accessible, said lead engineering researcher Scott MacKay.

Labs already do diagnostic tests, but the process takes time and often requires specialists. The U of A device is being crafted for easy use, quicker results and ideally, to test for more than one disease indicator at a time, MacKay said.

To that end, they are working to improve the biosensor’s method of detection to pick up multiple hints of abnormalities in the body.

MacKay, Tamura and their colleagues in the Department of Electrical and Computer Engineering used a 3D printer to create their little black box and the sample-bearing cartridge that snaps into it, for about $60. They also designed the circuit board that runs it. By the time the device gets to market after completion within two to five years, they hope to get sampling costs down to $10 a test.

“There’s an opportunity here to make a real difference in endless ways through early detection and diagnosis,” MacKay said, noting that a patent has been filed on the technology. “We want to get it into people’s hands.”