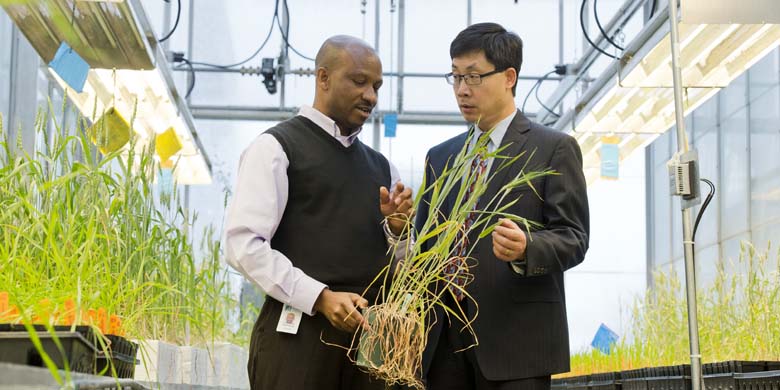 (Edmonton) As one of the top 10 barley producers in the world, Canada faces a problem of adapting to the new normal of a warmer, drier climate.

The 2012 growing season was considered an average year on the Canadian Prairies, “but we still had a summer water deficit, and it is that type of condition we are trying to work with,” said Scott Chang, a professor of soil science in the University of Alberta’s Department of Renewable Resources.

Chang began teaming up with fellow crop scientist Anthony Anyia of Alberta Innovates – Technology Futures in 2006, following a severe drought in 2002 that dropped average crop yield in Alberta by about half. They are exploring the genetic makeup of barley and how the grain crop—a Canadian staple used for beer malt and animal feed—can be made more efficient in its water use and more productive. One of their latest studies, published in the journal Theoretical and Applied Genetics, explores how to increase yield in barley crops while using less water.

Seventy per cent of barley grown in Canada is used for animal feed, and it is the third-largest crop grown here, following canola and wheat.

“Our research gives a way to get the most out of what water there is in a dry environment,” said Anyia.

The latest study was led by lead author Jing Chen, a former PhD student in Chang and Anyia’s lab. The group planted and harvested two common types of barley plants in test plots around Alberta, then analyzed the plants for genetic traits and other factors such as height, days to maturity and yield.

By studying the carbon isotope compositions of barley plants and their relationship with water-use efficiency, the researchers developed tools that plant breeders can use to improve selection efficiency for more water-efficient varieties. The latest findings stem from an ongoing collaboration that is ultimately aimed at bringing farmers a more stable breed of the plant that has less reliance on water and is less vulnerable to climate change.

Besides yielding results for growers, the collaborative research between Chang and Anyia is also bountiful for students who help conduct the work, the pair noted.

“We’ve so far had two graduate students and a post-doctoral student on our team, which has expanded scientific knowledge and contributed to the ultimate goal of better crop performance in the face of a drier climate,” said Anyia. “Their work helps power this process of discovery.”

The collaboration between the U of A and Alberta Innovates – Technology Futures benefited the research team and the work itself, Chang noted.

“Working jointly gives our graduate students access to researchers with complementary expertise as well as lab and field facilities off campus.”