If you can pick out bacteria from a sample and detect them without sample pre-treatment or purification, that’s like the Holy Grail.

Building healthy communities one drop of water at a time 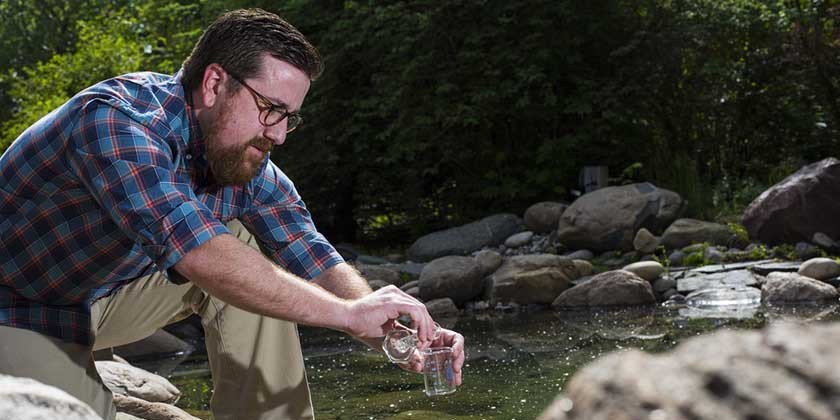 “Our goal is to develop point-of-care diagnostics to detect these contaminants,” says Michael Serpe, a University of Alberta chemistry professor. “We are developing something that someone can potentially add saliva to and determine whether they’re sick with the push of a button. We are also developing a proactive device that people can use to test water before consumption to ensure it is safe to drink.”

Serpe and his team are working on handheld diagnostic technology that can be used in rural regions where existing testing and treatment infrastructure isn’t currently available. He is establishing his field research in Poshina, a remote village in India. His next goal is to work with rural First Nations communities in Canada to implement water sensor technologies.

“If you look at Canadian First Nations communities and rural regions in India, they surprisingly have a lot in common with the issues they have to deal with from public health, water treatment and infrastructure perspectives,” says Serpe. “It is unfortunate that we are still dealing with these challenges in a developed country like Canada.”

He is aiming to deploy the technology in India within six months. “We’ve developed technology and are now working to build equipment that can be used on site. It’s such an important initiative having a real impact on communities.”

The future of nano-cavity monitoring and sensing

Fast forward to the not-so-distant future—Serpe and his team have big plans for the new technology. “This testing technology is not just limited to bacteria. We’re thinking long-term about detecting biomarkers for diseases.” He has plans for a project using polymer-based sensors—also known as nano-cavities—to monitor environmental contaminants and detect whole bacteria, viruses, pathogens associated with malaria, and even cancer cells in complex media such as water and blood plasma. “If you can pick out bacteria from a sample and detect them without sample pre-treatment or purification, that’s like the Holy Grail,” says Serpe. “We have early results which show it can be done.”

A prolific researcher and leader in both materials and analytical chemistry, Serpe is no stranger to international collaborations, having worked on many projects in China. This is his first project in India, funded by IC-IMPACTS, a Network of Centres of Excellence that brings together researchers, industry innovators, community leaders, government agencies and community organizations from across Canada and India to find solutions to poor water quality, unsafe and unsustainable infrastructure, and poor health from water-borne and infectious diseases. Serpe was recently appointed as IC-IMPACTS’ associate scientific director and theme lead for integrated water management.

Serpe came to the U of A from the United States in 2009. “As soon as I came here, I fell in love with not only the city, but also the department and the university. The bottom line is, out of all the places I’ve been in my career, the U of A has the best research facilities I’ve seen. I can do anything I want and everything I need to do associated with my science here. Some of the best institutions in the States don’t have what we have here.”

The Serpe Group studies various aspects of colloid, polymer and surface science, with emphasis on using photonic materials and responsive polymer-based systems for myriad applications. Examples include sensing, biosensing, controlled/triggered drug delivery, self-bending materials and actuators (such as artificial muscles), and water remediation. He was recently awarded a U of A Faculty of Science research fellowship. Serpe also received the Fred Beamish Award from the Canadian Society for Chemistry earlier this month, presented for innovative research in analytical chemistry that is anticipated to have significant potential for practical applications.

Building healthy communities one drop of water at a time
Newsroom