For Community Connections Award winner Jim Hole, dedication to his alma mater is as natural as the greenery his family built their business on. 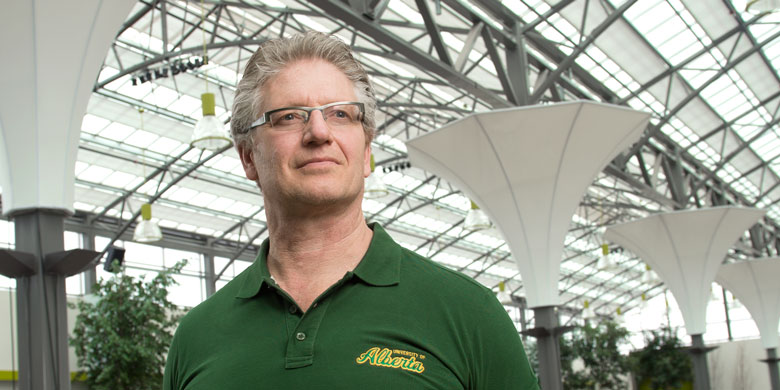 (Edmonton) As a child, Jim Hole remembers one particular wall in his grandmother’s living room, which had a line of framed photographs of her own sons and daughters, each proudly wearing a graduation cap and gown.

“I saw nine kids in these funny-looking outfits, and that left an indelible mark in my mind,” Hole recalls. “As I got older, I understood that those were my aunts and uncles, who all graduated from the University of Alberta.

“My grandmother was a seamstress and didn’t have the opportunity to get an education, but she and my grandfather were committed to ensuring that their kids did go to university and therefore, be better able to contribute back to society and, of course, further their careers.”

The devotion his grandmother had to the idea of higher education rubbed off, and Hole, even as he runs a busy, second-generation family greenhouse business, still devotes many hours to his own alma mater, 35 years after donning that U of A cap and gown himself.

For his years of service on a wide range of U of A boards and committees including the senate, championing the U of A every step of the way as a devoted alumnus, Hole is receiving the 2014 UAlberta Advocate Award, as part of the U of A Community Connections Awards.

The award recognizes someone who, though they don’t work or study at the university, contributes personally to the campus experience or makes life better for faculty, students or staff. They give their time, expertise and passion to advance the U of A and higher education.

Besides the deep-running family vein of green and gold that inspired him—Hole’s mother Lois served as one of the U of A’s most beloved chancellors and his father, brother, sister-in-law and many cousins hold U of A degrees—he has fond memories of his own.

While studying for the degree in agriculture he received in 1979, Hole played football and did a year of track and field with the Golden Bears teams, making lifelong friends along the way. As a young businessman, he was invited back to campus occasionally by caring professors to hear helpful lectures and occasionally visits the U of A Bookstore or cracks open his old textbooks for reference material.

“When you have a good experience at university, as I did at the U of A, you naturally have a closer affinity and it stays with you. When the opportunity arises, you want to give back.”

“If we all help, the university has the ability to graduate the very best people who can contribute to society. And a strong university is critical to the strength of Edmonton and the province.”

Hole has done just that over the years.

It started in 2001 when he was recruited to the Alumni Council (where his dad Ted also served at one time), as a representative for the Faculty of Agricultural, Life and Environmental Sciences. He became president of the council for three years, including during the U of A’s centenary year in 2008, when he also served as honorary co-chair of the celebration with U of A President Indira Samarasekera. Putting his green thumb to good use for the occasion, Hole put his own twist on the 100th anniversary celebration by launching a Green and Gold gardening contest in the community.

During his time on the council, Hole also helped develop Alumni Walk, a visual touchstone at the heart of campus. The circular brick feature is a popular gathering place for faculty and staff.

Hole has also served on the university’s board of governors and on its senate—where he sat on a committee that developed U School, a particularly powerful grassroots program.

“It gets the kids who would never think of going to university, coming to campus to experience what it has to offer. I think we will see the rewards in the next few years once those kids graduate from high school and look at the U of A as an option.”

Recalling good times spent on the U of A Quad as a student, “throwing a Frisbee with the sun on your face,” Hole currently serves on the university’s Campus Open Spaces Committee. The group is working on a master plan for the campus green spaces, to ensure “they are cherished and developed to the level they should be,” he said.

Hole also advocates for the U of A as a businessman, hiring students for seasonal work and graduates for the core of the greenhouse operation.

“The U of A is educating people to think, but at the same time, it is critical for business people to get involved, to help shape some of the graduates seeking employment. Their input is valuable in helping ensure that those students are coming out of university that much better.”

Hole encourages alumni to re-engage with the U of A, and to advocate for their alma mater.

“I’ve met a lot of great people here through the years, just as committed as I am to making the university strong. It’s rewarding, and important. If we all help, the university has the ability to graduate the very best people who can contribute to society. And a strong university is critical to the strength of Edmonton and the province.”