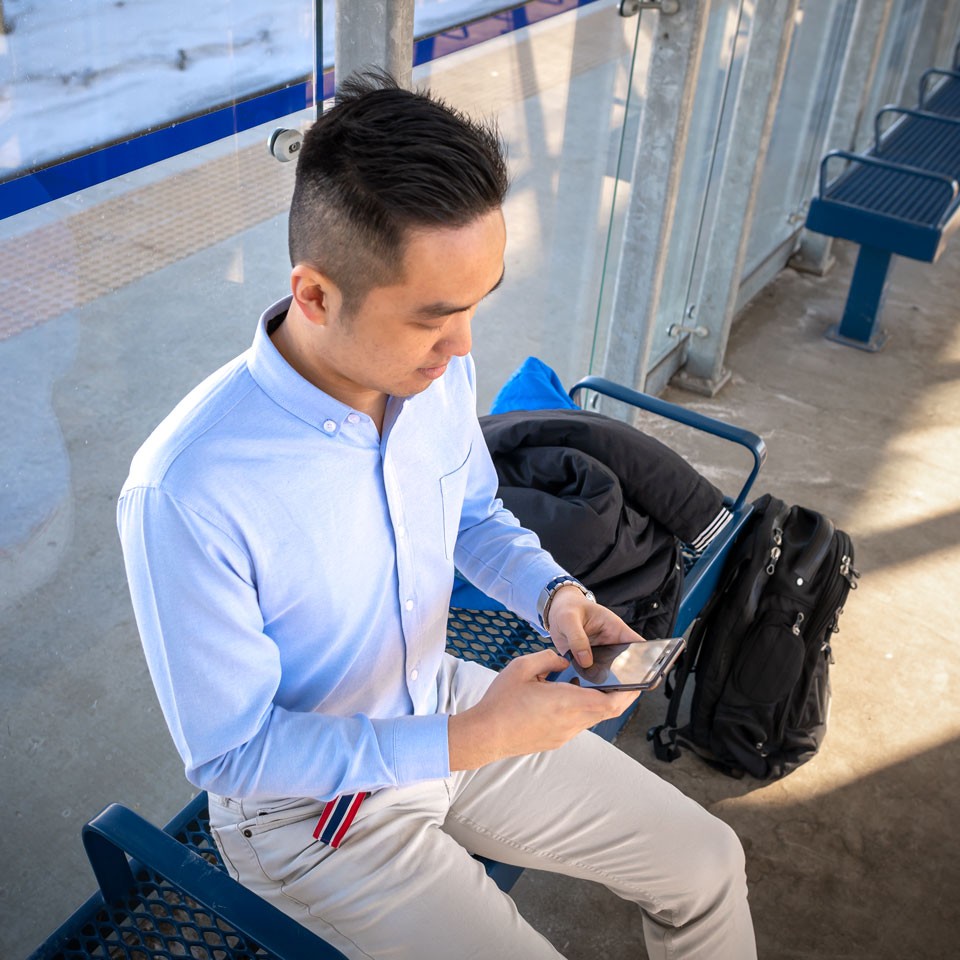 Brandon Wong wrote his best-selling novel, all 110,000 words of it, entirely on his phone. See the video below for a demonstration. (Photo: Richard Siemens)

With nine million readers worldwide, Brandon Wong has a fan base most established authors can only dream of. 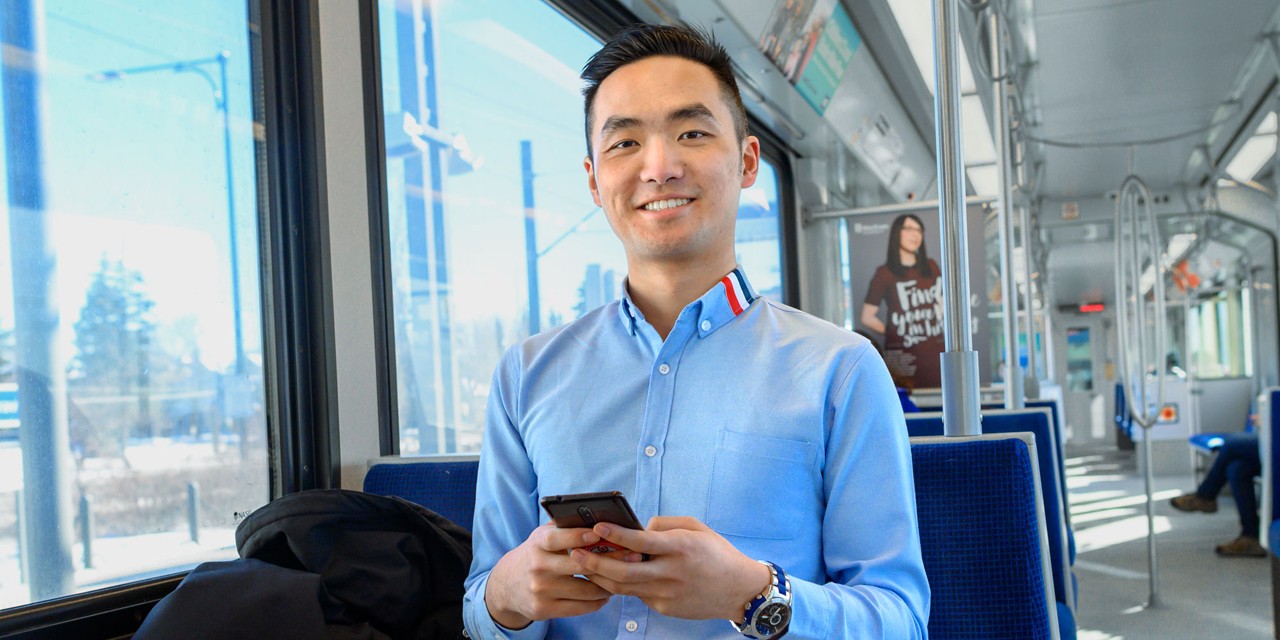 Brandon Wong was Wattpad’s top teen writer in the world for a three-month period in 2016, with fans in places as far away as the Philippines, India and the Congo. (Photo by Richard Siemens)

Brandon Wong just might be the biggest literary superstar you’ve never heard of.

Nine million people around the world have read his first novel, Playing By the Rules, since its first chapter appeared on the popular creative writing app Wattpad in 2015—blockbuster status by any measure.

At one point, the University of Alberta business student’s hockey romance story for teens racked up 30,000 reads per day. To put that in perspective, any book that sells a few thousand copies in a given week in Canada is considered a bestseller. Even Margaret Atwood’s The Handmaid’s Tale—Amazon’s top-selling book of 2017 after inspiring the hit television series on Hulu—has sold only eight million copies since it was first published in 1985.

Wong was Wattpad’s top teen writer in the world for a three-month period in 2016, with fans in places as far-flung as the Philippines, India and the Congo.

"I look at the numbers every day and I'm just astounded by how many readers there are,” said Wong. “To have nine million people reading your story is just amazing."

Created in Toronto in 2007, Wattpad is a global online community of more than 65 million readers and writers, mostly women under 30, who share stories in a variety of genres and collectively spend 383 million hours every month on its site and mobile app. The vast majority of its traffic, 90 per cent, is on mobile devices.

The platform has launched some spectacular careers. The popular Netflix series The Kissing Booth is based on a story written by Beth Reekles and posted on Wattpad in 2011, and later picked up by Penguin Random House.

And Anna Todd’s After had been read more than 1.5 billion times on Wattpad before the company brokered a mid-six-figure deal for Todd with Simon & Schuster. The series has since sold 15 million copies in 30 countries, leading Cosmopolitan magazine to call her the “biggest literary phenomenon of her generation.” Todd was just 14 when she started writing her novel.

Most of Wattpad’s four million writers are unpaid. A select few, about 180 in the platform’s “star program,” earn a small sum. For Wong, it amounts to about US$100 per month, he said.

Wong’s success is the very definition of serendipity. He enjoyed writing stories as a child growing up in Edmonton, but never really aspired to a career in the craft. In high school, he trained his sights on business and finance at the U of A.

"The first summer off after high school, I was sitting around all day playing video games and not being very productive,” he said. “I thought, I feel like there's a better way to get this energy out. I had these thoughts and just wanted to put them down somewhere."

So he started searching for writing apps that would allow him to sketch out random ideas and observations on his phone. That led him to Wattpad.

He took up the challenge and wrote a 2,500-word “scene” about an arrogant, self-obsessed hockey player who gets ejected from an arena for poor behaviour. He admits it was partly a way to process what he felt was his own arrogance as a star track athlete in high school, winning four Edmonton championships in hurdles and triple jump.

"I got a little bit cocky,” he said. “I didn't try to rub it in, but sometimes it happened.”

He also worked as an usher at Rexall Place and felt he was well acquainted with the world of hockey. As he started university that September, he worked writing into his daily routine.

“I wrote in the evenings, on the train to school, and on weekends,” he said. “Every day I'd try to fit in some time—half an hour or an hour."

When he posted his short piece on Wattpad, the response was modest but encouraging.

"People started commenting they'd like to see more, so I decided to write another chapter,” paying close attention to readers’ comments and analytics, he said.

"I started catering to the audience more, and I looked at the numbers because I’m a big numbers guy. It's a fine balance, staying true to your own vision but also giving people what they want.

“The gift of WattPad is there's a lot of analytics for people to take advantage of if they want to. In addition to raw numbers, there’s geographic distribution, age distribution, gender distribution and percentage of readers who finish chapters.”

Realizing hockey didn’t sell in some parts of the world—and more important, that his audience consisted mainly of teenage girls—Wong shifted direction to include what the numbers told him they love most: romance.

As he posted more chapters, the story caught on. After he hit the halfway mark three months in, the story was pulling in a thousand new readers every day. It was soon picked up by Wattpad’s teen fiction hot list, igniting Wong’s meteoric rise to the top of his genre.

By the time the book was finished in June 2016, just nine months after he began, he had written 110,000 words, almost all with a thumb on his phone. His numbers were now in the millions, with readers in more than 100 countries, most of them in the U.S., the U.K., India, Canada, the Philippines and Australia.

At the height of its popularity, however, Wong got cold feet. He pulled the novel from the site to make revisions, feeling there were plot holes and sections that were “cheesy.” When he reposted, it had lost momentum.

His subsequent work, most of it unfinished, hasn’t done quite as well, at least not yet. But there have been interruptions, he said, like completing a degree in business.

Wong graduates this spring with a BCom, eager to apply what he’s learned to a human resources career in the travel industry. While reluctant to consider a career in writing, he said he’d be open to it if picked up by a publisher.

But he will continue to write in any case. Even if nothing happens, "I can always say I wrote a full-length work before I turned 19,” he said.

"(Wattpad) is a great opportunity for people to be discovered, and if you have the slightest passion for writing, it's a great avenue to pursue.

“Put something up there and see where it takes you."