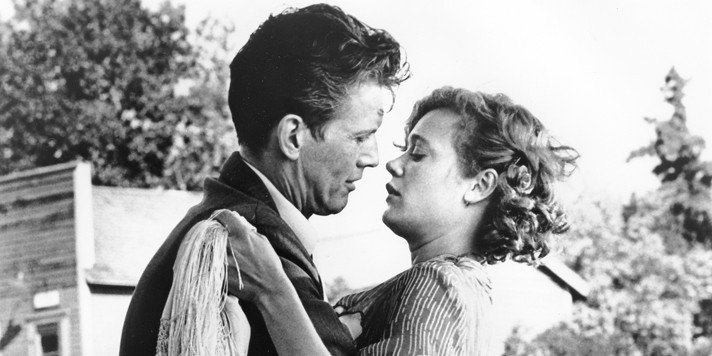 (Edmonton) When it hit theatres in 1989, Bye, Bye Blues seemed destined to take its place in the pantheon of classic Canadian films. The hugely popular love story, set in Alberta during the Second World War, brought much acclaim to its writer and director, University of Alberta alumna Anne Wheeler, and a best-supporting-actor Genie Award for its star, Rebecca Jenkins.

But after its theatrical release, the film virtually disappeared from the public domain. No one could figure out who held the copyright, preventing further distribution on DVD or over the Internet.

However, thanks in part to the Film and Video Arts Society of Alberta, and to U of A Archives for providing one of the few existing clean 35mm prints of the film, Bye, Bye Blues celebrates its triumphant return with a 25th-anniversary screening at Garneau Theatre in Edmonton Friday, April 17.

The print, which sat collecting dust in the vault for more than 15 years, was donated to the U of A by Wheeler, who studied mathematics and music education at the U of A in the late 60s and early 70s.

“This print was actually sitting in a back lane in Toronto, waiting to be taken to the dump when a friend saw it and phoned me,” says Wheeler. “I had a truck go pick it up and brought to me in Vancouver.

“I rescued the existing 35mm prints and elements from all over Canada and donated them to the University of Alberta . . . But few theatres now even show 35mm and laboratories that can transfer 35mm to digital are becoming scarce.”

Bye, Bye Blues features the character of Daisy Cooper, played by Jenkins, who joins a jazz band in rural Alberta to support her family while her husband is stationed in Singapore. It’s a poignant romantic yarn full of inspiring music—just the kind of film with the potential to win generations of fans.

But that didn’t happen, at least to the extent the film deserved, as it became trapped for years in in a hopeless copyright quagmire.

“I was in a constant state of frustration,” says Wheeler. “The requests for the film have never stopped, and I personally wanted to be able to provide the fans with DVDs, but it was always presented to me as impossible since nobody could tell me who held the distribution rights.

“Bye, Bye Blues was sold so many times to different companies in dozens of countries for different purposes and different lengths of times that the legal logistics were more than I could afford to sort out . . . I tried to figure out how to do it, hired lawyers, became overwhelmed and gave up.”

Then Jenkins’ husband, Joel Bakan, became involved, enlisting the help of one of Canada’s top copyright lawyers, David Zitzerman, who helped apply for a license under a seldom-used section of Canada’s Copyright Act. The provision grants distribution rights for “orphaned works” when it can be shown that copyright is un-locatable.

The license was finally issued to Wheeler and Jenkins in 2013, much to the relief of everyone involved in the film’s production.

“It seemed an outrage for such a great and important Canadian film to be facing oblivion,” says Bakan. “It's symptomatic of continuous merger and acquisition activity in the Canadian film and television industries. As companies that originally owned the film were bought, dissolved, reorganized and so on, the question 'who owns this film?' became more and more complicated, so much so that, eventually, it literally could not be answered.

“The problem was exacerbated by the fact the film—like most Canadian films—was likely judged by potential owners to have little commercial upside in the years following its release, meaning there was little incentive for them to put effort into figuring out who owned it.” Bakan says he hopes their success in acquiring the license will set a precedent for other Canadian films caught in the same bind.

For her part, Wheeler is hoping Bye, Bye Blues will finally win the audience share it deserves. To that end FAVA is helping to properly digitize the film for posterity, according to the society’s programming director, Trevor Anderson. A lower quality version made from Beta SP is already available on iTunes, but the upgrade will meet today’s standards for DVD and electronic distribution.

“We’re helping to raise money for a state-of-the-art digital transfer from a pristine 35mm film print, with full colour grading,” says Anderson. The process can cost up to $30,000.

“It's terrific to have films preserved in archival collections, but I still think [my films] are working films that can entertain and enrich people's lives,” says Wheeler. “Bye, Bye Blues has passed the test of time.  It keeps winning over new audiences, young audiences and in doing so, has a future.

“Maybe there will be a 50-year anniversary and beyond.  It's the kind of work that brings people together, and that is very special.”

Tonight's Bye, Bye Blues anniversary party is SOLD OUT. The celebration, which is part of FAVA Fest, starts at 7 p.m. at the Garneau Theatre. Wheeler, Jenkins and Balkan will all attend for a Q and A after the film, and there will be a live musical performance featuring Jenkins and Bakan.