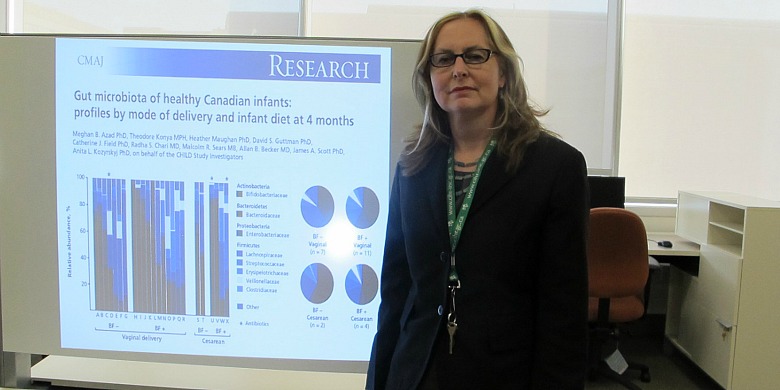 130211-anitakozyrskyj-banner
UAlberta epidemiologist Anita Kozyrskyj and her team found that healthy babies born by C-section or fed by formula had a different makeup of gut bacteria from that of babies born vaginally or breastfed.

(Edmonton) Caesarean section delivery and formula feeding appear to change the bacteria footprint in babies’ guts, according to new findings published today and led by a medical researcher at the University of Alberta.

Faculty of Medicine & Dentistry researcher Anita Kozyrskyj and her colleagues across Canada published their findings in the Canadian Medical Association Journal. Her team studied bacteria found in fecal samples from 24 healthy babies in Manitoba. The samples were collected when the babies were about four months old and examined using high-tech DNA sequencing methods. The infants are part of the Canadian Healthy Infant Longitudinal Development (CHILD) study, which enrolled pregnant women from four Canadian cities.

“The initial step for us was to report on the changes to the gut bacteria based on interventions like C-section delivery or formula feeding. Our next step is to answer the question, ‘Does this bacteria footprint make a difference in terms of child health?’ We will look for conditions like kids’ wheeze, allergies, and whether they were affected by gut bacteria changes associated with breastfeeding and C-section.”

Meghan Azad, a post-doctoral student of Kozyrskyj’s, added, “We want parents to realize that the decisions they make regarding C-sections and breastfeeding can affect the infants’ gut bacteria—and that can have potentially lifelong effects on their children.”

The next step for Kozyrskyj and her research team is to do larger studies—the first one involving 200 babies and the following one examining data from 2,500 infants, including infants in Edmonton. Her team was one of seven teams in Canada to receive $2.5 million in funding from the Canadian Institutes of Health Research Microbiome Initiative.

Kozyrskyj, an epidemiologist, is an associate professor in the Department of Pediatrics at the U of A, and the Women and Children’s Health Research Institute research chair in maternal-child health and the environment. U of A team members included colleagues from the Department of Obstetrics & Gynecology and the Faculty of Agricultural, Life and Environmental Sciences. The team also included members from Ontario and Manitoba.