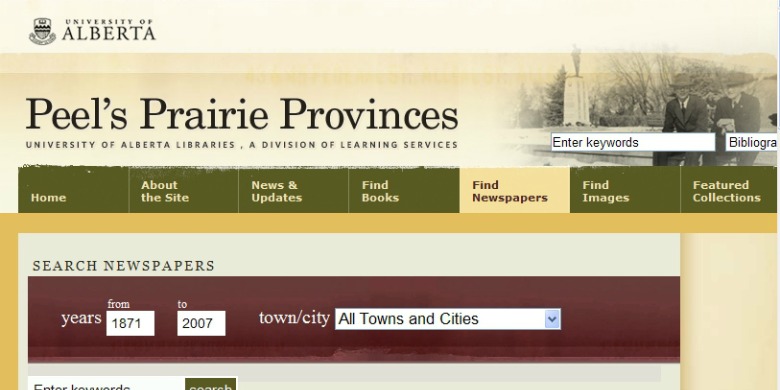 (Edmonton)—First it was the Internet search-engine giant Google that called at the doors of the University of Alberta Libraries. They wanted to add the U of A’s Peel's Prairie Provinces website’s catalogue of more than 67,000 newspapers into their university newspaper index.

A few years later, the website, which Mary-Jo Romaniuk, acting chief librarian at the U of A, says has the Cadillac set of tools on digitization, has caught the attention of a team of international researchers who want to use the university’s digitized newspaper collection, along with similar collections from the U.S. Library of Congress, for a data mining research project. The researchers will use the historical records on the 1918 global influenza pandemic to develop methods for understanding the spread of information and disease.

“It’s not very often that you see Library of Congress and University of Alberta in the same line,” says Geoff Harder, U of A digital initiatives coordinator.  And Romaniuk agrees, explaining that the request by the researchers indicates that the U of A libraries is closer to realizing a vision set almost a decade ago.

“Our previous chief Librarian, Ernie Ingles, had this vision of this Peel website probably 10 years ago,” she says.  “So it’s very special to know that in our niche—our collection of collection of western Canadiana where we have collection strength—that we have probably the preeminent collection that people from around the world can come to,” she says.

“We’re happy about our collection to be used in conjunction with those at the Library of Congress.”

The researchers used information from the university’s libraries to successfully compete for funding from the Social Sciences and Humanities Research Council’s second Digging into Data Challenge for the study. They will be combing through newspaper collections dating back to the 1800s looking for patterns of information, such as references to influenza, for the study–an exercise Harder says would have taken them decades to complete without the access the university has granted them.

“It was not possible to do this kind of research before by flipping through newspapers. It would take literally decades to go through and tease out all of the occurrences of something like the Spanish flu or influenza. But they would be able to apply tools to our collections and process that information within minutes, and be able to indentify millions of occurrences of that in our collections.”

But it was not just the university’s 4,013,330 digitized articles that brought them to the U of A; it is the way that the libraries have gone about digitizing western Canada’s history— everything from newspaper to post cards and maps of the prairies—that excited the research team. An approach, that Romaniuk says sets the U of A libraries apart from similar such efforts elsewhere.

“The technology we use to digitize our collections makes it easier for them to mine the data,” she says. “The collection is being built for the future, using advanced technologies that allow everyone, including scholars, to use them as they wish. We have adopted the Cadillac style of digitization, we’re doing digitization on a different level compared to others,” Romaniuk says.

“This is an example of the vision that exemplifies the “U of A libraries as a leader in supporting what we call new scholarship as is undertaken by the faculties and takes direction that faculties want to take, because faculty scholarship is changing in the social sciences and humanities. We want to be part of that."

The website is not just a landmine for scholars, it is a place where Canadians can go and learn about their history, using the massive collection of maps, newspapers, post cards, books and papers on western Canada that have been digitized and made accessible to everyone, she says. “All of this information was locked up and not really accessible.”

And by making them available to public, Romaniuk says the university is helping build communities with the free resource. “So much about the internet has allowed people to better know other people and you can’t have community if you don’t have a common understanding, “she says.

“All of these different collections start connecting and people are able to make use of them in very personal ways, such as researching their family history. And they are able to get a really good understanding about who we are as Canadians and Albertans, what the U of A represents and what we believe in,” she says.