Camp-out turns teens into digital knowledge-keepers of the future 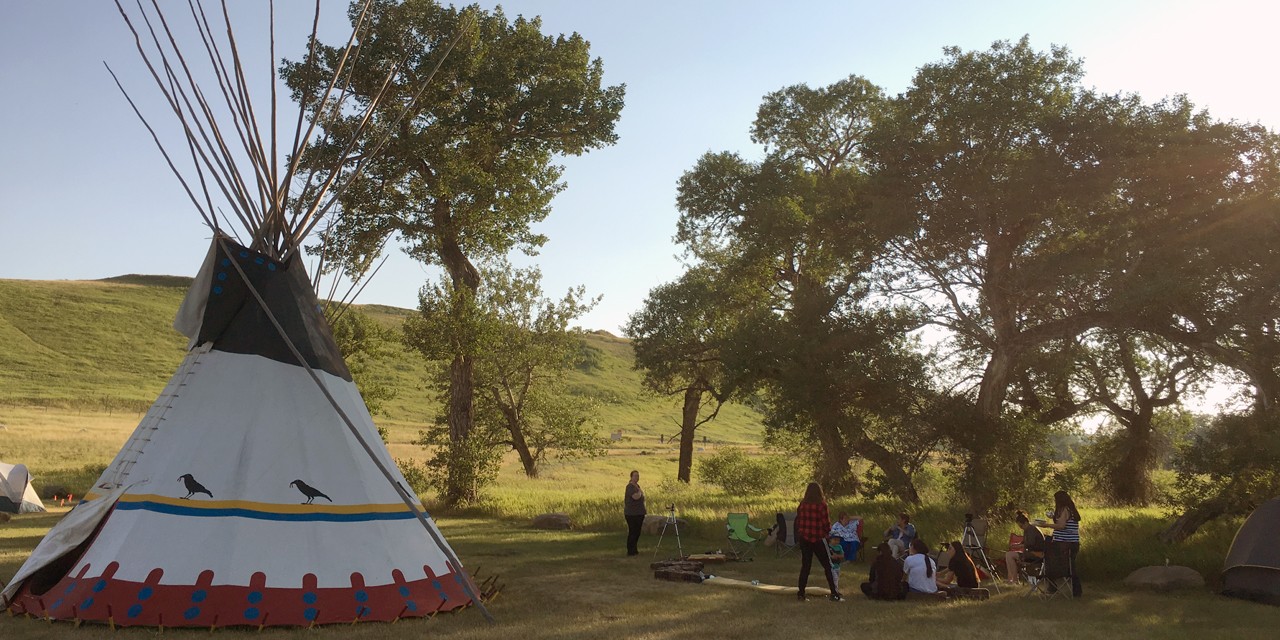 Teens from Piikani Nation got their first experience at becoming the community’s future knowledge-keepers as part of a UAlberta-led summer digital literacy camp held on the banks of the Oldman River.

For three busy days last summer, teens from Piikani Nation in southern Alberta toted tripods, video cameras, laptops and microphones around their ancestral lands, learning about their Blackfoot culture and along the way, picking up high-tech skills.

Blending the old with the new, they got their first experience at becoming the community’s future knowledge-keepers, using technology to record and preserve precious cultural traditions.

Tailyn Potts, 15, filmed “the land, my peers, the mountains, the water,” and liked sleeping in a tipi as her ancestors did, as well as the idea of recording her community’s traditions. “We got to catch a moment on camera so we can look back at it.”

The experience was at the heart of a digital literacy camp held on the banks of the Oldman River. The pilot project, a partnership of the University of Alberta’s Faculty of Extension, the Peigan Board of Education’s Piikani Youth Empowerment Strategies Program and Piikani Nation Secondary School, is significant to both the future and the past, said Blackfoot elder Herman Many Guns.

“The camp we had was very beneficial for people,” said Many Guns. “It’s talking about our culture in combination with technology; with technology the younger people are focused around the new stuff, things that are happening today, so by combining both, it’s making it more interesting for the students and the younger generation, but also it’s going to start schooling the younger people in our communities to look forward to these kinds of programs in the future.”

The outdoor workshop, called ii na kaa sii na ku pi tsi nii kii in Blackfoot, was the first of what U of A researcher Rob McMahon hopes will be a series of summer camps that give Indigenous youths a way to preserve their culture and learn digital literacy in meaningful ways.

“The community is concerned that a lot of their culture and traditions are in danger of being lost. The Elders were very much in support of digitizing it to make sure it’s there for future generations,” he said. “At the same time, there are many ways to learn about digital technology that come from different perspectives, so Indigenous peoples living in communities like Piikani aren’t necessarily forced to think about it the way people working in a city high-rise might think about it.”

Elders and school officials in Piikani wanted to see a youth-based project about the community’s Blackfoot culture and language, and that provided an opportunity for McMahon, who researches how Indigenous communities can tailor technology to their needs.

“I’m curious about how technology can be used to support people’s self-determined goals. Too often, Indigenous youth have to make a false choice between adopting digital technologies or participating in the cultural and language-driven activities grounded in their communities,” he said. “This project shows that they can do both. Instead of sitting at computers in a classroom, this is a way to get digital skills in an appropriate land-based learning environment.”

The project saw ten Grade 9 students work with a mix of Elders including Many Guns, along with other community members, McMahon and one of his graduate students. The teens spent three days learning about traditional Blackfoot games and sports, stories, drumming, songs, cooking, fire-making and tipi-raising. They interviewed Elders, toured the community’s ranch, gravel pit and wind turbines to learn about economic development and visited Napi’s Playground, an area sacred to the Blackfoot.

The teens recorded it all on film and during the school year will edit and produce short videos of their footage, then present it to the Piikani community next June.

“It’s cool that we are videotaping our culture and going to be sharing the video with other people,” said Dawn Many Guns, 16.

And while they picked up skills like knowing how to get good camera angles and frame a story, there was also a greater lesson of self-discovery.

“It taught me a lot about my cultural background; I am more interested in it and it makes me really proud to be native,” added Thunder Crowshoe, 15.

Hoping to keep the project going, McMahon is applying for grants to fund more camps for the next three summers with Piikani Nation. This year’s event has already resulted in two handbooks, one for instructors and one for student participants, that the school can use to create their own future workshops.

Herman Many Guns sees far-reaching benefits of the project that go beyond Piikani Nation.

Camp-out turns teens into digital knowledge-keepers of the future