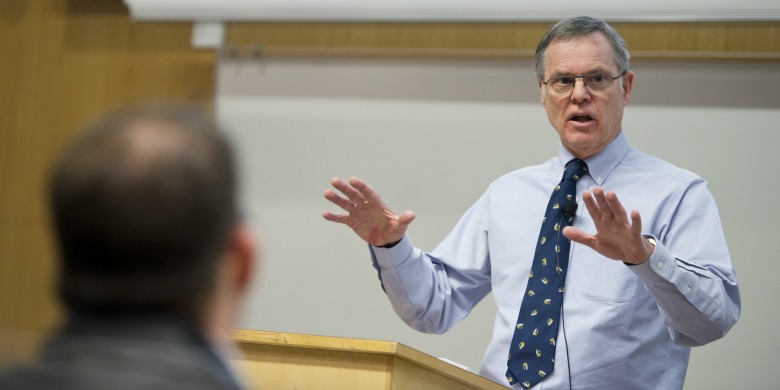 130313-martinfergusonpell-banner
Martin Ferguson-Pell, acting provost of the University of Alberta, addresses a standing-room-only audience March 13 at the Campus Forum to discuss budget challenges in the wake of post-secondary funding cuts. (Photo: John Ulan)

The 7.2 per cent cut to post-secondary funding came as a “profound shock” when it was announced in the budget, he said, and in the days since, senior administration has started looking for ways to rethink how we do business—a conversation that will include all faculty, students and staff.

“This is a very, very difficult situation. I don’t in any way want to underestimate the challenges that are before us,” Ferguson-Pell told a standing-room-only audience at a March 13 campus forum set up specifically to discuss the budget challenges.

“We are one of the leading universities in Canada—we’re in the top five—and we intend to stay there.”

The budget reality includes a $43-million cut to the U of A’s Campus Alberta grant, on top of a structural deficit that previously existed due to expenses—largely driven by salaries and benefits—rising, in some years, twice as fast as revenues. The fiscal gap is even wider when considering the U of A and all post-secondary institutions were promised a two per cent funding increase.

All told, the U of A faces a $67-million operating deficit for 2013-14. The university has until May 31 to submit its Comprehensive Institutional Plan including budget to the province. However, the longer-term fiscal picture will take longer to resolve, said Phyllis Clark, vice-president of finance and administration.

“From what the provost has said, we will be able to get dispensation on some kind of a deficit. We would be lucky to have it over three years; I think more likely we will have it over two years. We have this problem we will have to confront.”

Ferguson-Pell said senior administration, including President Indira Samarasekera, met with the deans March 10 to discuss future plans. They agreed to a 1.5 per cent across-the-board reallocation across all faculties and units, similar to recent years, and a three per cent reallocation from central administration.

Restrictions have also been imposed on travel, specifically travel expenses funded by operating dollars, a move that’s expected to shave costs by 25 per cent. The restrictions do not affect travel related to revenue generation, such as student recruitment, “which will continue unaffected,” Ferguson-Pell said.

During their meeting, the deans were challenged to look for new and innovative ways to find cost efficiencies and generate revenues, an exercise Ferguson-Pell said would include “trial balloon ideas” to find ways to cope with the budget crisis beyond this year. That exercise included looking at how a budget would differ if you removed 20 per cent in costs and replaced it with 10 per cent in additional revenue.

“This isn’t to say that we’re talking about 20 per cent cuts or anything like that, but what we’re saying is we want to think about the big ideas in terms of how we would go forward so we can start to shape them into something that is going to create a strong academy.”

During the question-and-answer part of the forum, Ferguson-Pell added that finding new ways to generate revenue, such as through professional development and continuing education courses, could help lessen the budgetary impact across the faculties.

The Q&A featured a number of questions related to possible budget cuts, staffing challenges, future consultations and new cost structures. Ferguson-Pell said the university recognizes that it cannot continue with across-the-board cuts indefinitely and that “vertical cuts” will be examined. He added that it’s far too premature to define what that could look like.

“What we’re saying is we’re looking at ways where we could make reductions in our expenditures that would enable us to build on our strengths, to focus on our excellence, to focus on the things that are aligned with our strategic plan,” he said.

“How you operationalize that at the program level or faculty level or course level is something we have not developed at the moment. That’s something we need to be working on and discussing with you over the next few weeks.”

Ferguson-Pell recognized consultation and fear about the budget crisis is not easy, but said he has been encouraged by the early response to the Change@UAlberta website and the constructive ideas put forth by the campus community.

“We all realize that this is going to have an impact on a lot of individuals in the university. I want  you to be reassured that we are really focused on looking at the human dimension of this.”

Ferguson-Pell also addressed fears of loss of academic freedom through a new mandate letter from the provincial government that’s expected sometime next week. From conversations with the ministry, the idea behind the letter is not worrying, he said, and is anticipated to outline expectations of working with Campus Alberta and collaboration among institutions on strategic priorities.

Ferguson-Pell encouraged the campus community to engage with friends and neighbours in the coming weeks and months, and reinforce the importance of post-secondary education to Alberta’s economic prosperity. Together, he said, we will navigate this “profound bump in the road.”