Campus Saint-Jean grad enjoys French to the fullest through drama

For Tambry Bernath, theatre was a way to act on a lifelong passion for her second language. 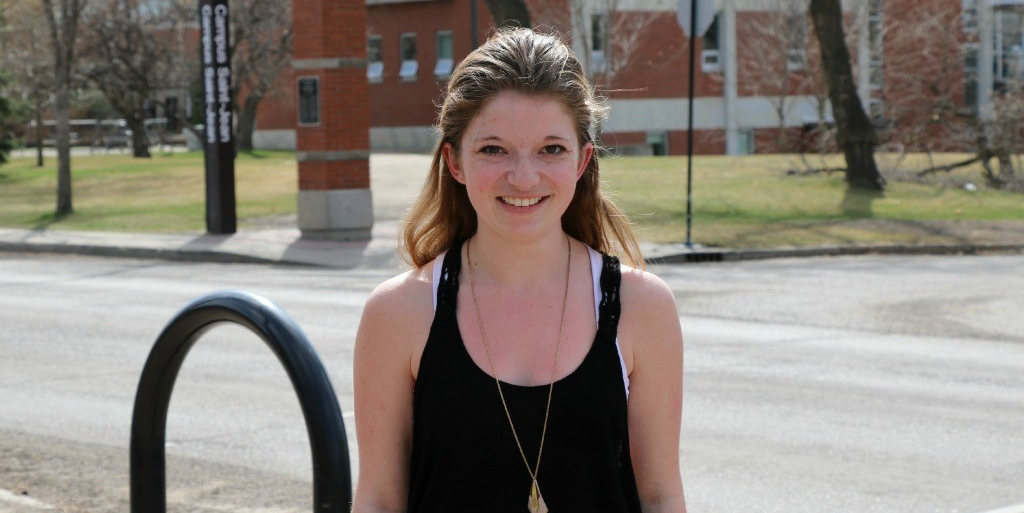 At Campus Saint-Jean, Tambry Bernath found opportunities to translate her passion for French and drama into life-changing experiences.

(Edmonton) When you meet Tambry Bernath for the first time, you might find it hard to believe English is her first language.

“I was enrolled in French immersion from preschool to Grade 12. My parents would have preferred to send me to a French school, but they are not right-holders, so it was impossible,” says the native of Kelowna, B.C., who graduates this week with a degree in political science, minoring in translation. “I think my mother wanted to give me what her parents couldn’t, because they didn’t have the opportunity to do so.”

As she approached the end of high school, Bernath felt it was important to keep pursuing her passion. “Our French immersion program was quite small. We were about 60 French immersion students out of 600. It was in Grade 11 that I realized I didn’t want to lose all I had achieved.”

After a representative from the University of Alberta’s Campus Saint-Jean visited her high school, Bernath decided to take up post-secondary studies at the French-language faculty. “I was intrigued by Campus Saint-Jean. Its character and size really made me feel as though Saint-Jean is a whole community by itself,” says Bernath, who lived in the CSJ residence during her first year in Edmonton.

Living and learning in French

During that first year, in the fall of 2011, Bernath slowly came out of her shell. “Once I moved here, I quickly realized there was a limit to my French-language skills. However, I was eager to learn and live in French,” she said.

At that time, she did not know that she would further develop her passion for French through drama. “I had never acted, nor thought that I’d do that on a regular basis,” she says. “During my first year at university, I took a drama course taught by Bernard Salva. Gradually, I started having so much fun in the class, which gave us the opportunity to blow off a little steam.”

Beyond the course content, Bernath says, she enjoyed the teaching method Salva used. “Bernard Salva is a professor like no other. He is pretty direct. He will not beat around the bush if he has something to tell you about your acting, and that’s what I liked the most. He also stressed the importance of speaking clearly and pronouncing carefully to avoid mumbling. I was looking for such discipline,” she explains.

Salva also opened new doors for Bernath to get the most out of her student experience. “At one point, he told us about a summer internship opportunity in France, in an isolated area in the mountains. It was a very short program, only two weeks, but it was very intensive. The first time I went there, I only did the drama internship program. After this first amazing experience, I decided to continue my artistic journey in drama at CSJ,” said Tambry, who served as president of Théâtre à l’Ouest for two years and secretary during the past year. She also played the lead role in the student drama club’s 2015 production of Pinocchio.

Bernath’s journey took her to Europe during the summers of 2013 and 2014. “I went again for the drama internship program, but I also took the opportunity to travel around Europe for seven weeks. I met people, I travelled and I learned.”

According to Salva, Bernath is a great example to emulate. “It’s hard to define what a ‘model student’ is, but I think Tambry is just what every professor is looking for in a student,” he says. “To learn something new, you must love it and feel it, and that’s what Tambry did. She gave everything of herself to drama.

“She started as a shy young girl, but over the years she has become that strong person who helped others to excel,” Salva adds. “As professors, we always aim at enabling our students to live an enriching experience that goes beyond spending four years at university only to get a degree. In the world of theatre, you must not be afraid of constructive criticism, and Tambry understood that very well. I have rarely seen such a dedicated and involved student.”

While attending classes, Bernath maintained a busy schedule, pursuing her passion for theatre as a member of the drama club and participating in activities organized by other student clubs. She also managed to squeeze in a part-time job, working 25 hours a week at Le Carrefour Bookstore. “It gave me the opportunity to discover the Franco-Albertan community and to help people from the community to learn about resources available in French. I also helped teachers, some of whom didn’t even speak French, find resources for their students.”

Bernath says making that kind of connection with the community is why she chose Campus Saint-Jean. “French is a language that brings people together, and that’s exactly what I have been given the opportunity to live here. People often mention that students speak English at Saint-Jean. But we shouldn’t forget that we live in a minority setting, and that English is the common language outside the campus. In this context, everyone should make efforts according to their goals. You are still a francophone or a francophile even if, on occasion, you speak English in the hallways of Saint-Jean. I chose Campus Saint-Jean because I wanted to live in French. So it was very important for me to speak French at La Fac.”

As for what’s next, Bernath is headed to Europe again after her convocation ceremony tomorrow. “I’m moving to France for one year. I got a visa and a work permit; I want to live even more in French. I have nothing planned yet. Once in France, I’ll get a job. At the end of that year, I will see what opportunities may arise, but my goal will always be to pursue a career that will give me opportunities to use both of Canada’s official languages.”

Campus Saint-Jean grad enjoys French to the fullest through drama