Can the power of humour affect change?

Sitcoms like ‘Little Mosque on the Prairie’ that poke fun at multicultural tensions are good for a universal laugh but unlikely to change attitudes in the long term, says researcher. 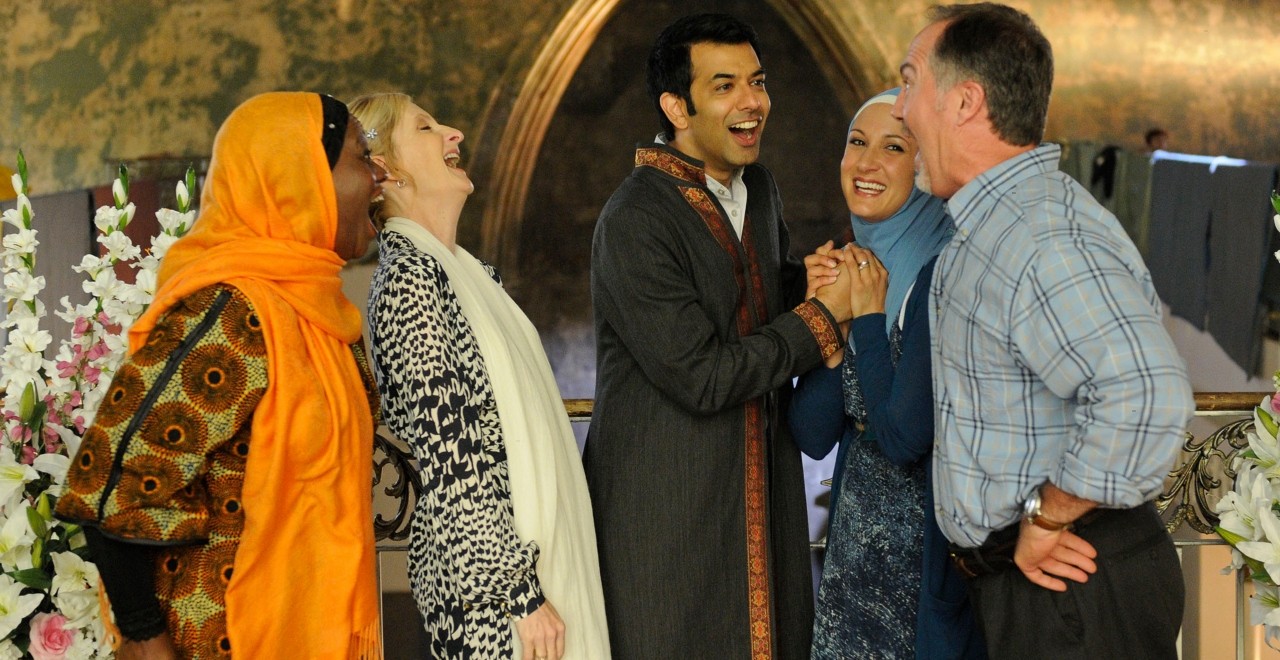 A scene from the final season of 'Little Mosque on the Prairie' in 2012. The show's multicultural take on sitcom conventions attracted a lot of initial buzz, but its long-term impact on anti-Muslim bias is questionable, according to a U of A researcher. (Photo: CBC/Telefilm Canada)

In 2007, Little Mosque on the Prairie had one of the most remarkable debuts in Canadian television history.

Before the first episode of the CBC sitcom hit domestic airwaves, the American news media picked up on its unusual premise—"small town Canada with a little Muslim twist”—centred in a fictional Saskatchewan town called Mercy.

It was a sign that perhaps negative attitudes towards the Muslim community were beginning to shift in the aftermath of 9/11, and hopes were high that the show itself could further foster tolerance.

Jay Friesen, a University of Alberta doctoral student in comparative literature who is finishing a thesis focused on Little Mosque, isn’t so sure those hopes were entirely justified.

Comedy shows are “great for raising issues and educating,” he said pointing to a large body of literature on humour, “but not as persuasive as we might hope.

“Those who are already sympathetic are laughing, and feel like they’re part of it, but those you're hoping will shift their perspective, at the end of the day, perhaps don't take it that seriously."

The unprecedented hype over the sitcom was one reason Friesen decided it would be a great topic for his PhD in the first place. Having examined Seinfeld and Curb Your Enthusiasm in his sociology master’s thesis, hefelt well-enough versed in humour theory to take on a new challenge—a multicultural spin on a conventional genre.

“Sociology is so much about trying to understand patterns of human behaviour—why we do the things we do without thinking," he said. “Those two shows (co-created by Larry David) have a beautiful way of taking mundane human interactions and asking, 'Why do we do it this way?’"

Little Mosque, however, aimed to achieve something quite different in the wake of 9/11, argued Friesen.

"It was trying to do things we typically don't look for in a 22-minute sitcom, like addressing Islamophobia and confronting racial prejudice.”

To begin with, it was a show that could only have been produced in Canada, he said, largely due to the success of multiculturalism.

He pointed to a 2006 Environics report that showed a clear majority of Canadians—83 per cent—agreed Muslims positively contributed to Canada. The report also revealed that Canadians are less likely than those polled in other countries to believe Muslims are hostile to them.

In his thesis, which he hopes to finish this year, Friesen set out to demonstrate how the show was both a reflection of Canada’s unique multicultural climate and a vehicle for promoting dialogue between cultures, using humour to break down barriers.

"It was interesting that you find the same jokes familiar in other network sitcoms, but instead of saying you should accept (Muslim people) for their differences, it said, ‘Look, we're all laughing at essentially the same things. We're actually more similar than we are different.’"

The show’s creator, Zarqa Nawaz, claimed in media interviews that politics was always secondary to humour, even while the script touched on more serious themes drawn from her experience as a young woman growing up in Canada—faith, tolerance, feminism and the interactions between Muslims and non-Muslims.

“Audiences are telling us that we've never seen a show where Muslims are portrayed as normal people who are, you know, who are fun to be with, who are funny and have a sense of humour,” Nawaz told National Public Radio in 2007.

According to Friesen, it was as if the writers were saying, “’We tell the same kinds of jokes that Canadians in general find funny. For example, an overbearing father, too restrictive of his daughter, leads to the same tropes typical of many sitcoms,” he said.

“But there are subtle nuances that are more culturally specific, so it's a kind of hybrid.”

In an episode called “Swimming Upstream,” a female Muslim character who suffers a knee injury is prescribed Aquacize by her doctor. The class is normally run by a female instructor, but on the day the injured woman arrives, she finds a substitute male teacher.

The woman solves the problem by buying a burkini, Muslim swimwear for women that allows them to remain covered. The other women in the class are intrigued, expressing a desire for the same swimsuit, “for entirely non-Muslim reasons,” said Friesen.

"It shows audiences some of the cultural beliefs that some women characters adhere to, some of the hiccups that occur when trying to negotiate different cultures coming together in public spaces,” he said.

It also reveals a distinctly multicultural moment, a way of moving forward through a humorous form of cultural exchange. Whether it moves the needle on social attitudes towards Muslims, however, or changes anyone’s mind who isn’t already accepting of Muslim culture, is another question, said Friesen.

One recent study did conclude that prejudice against Muslims was reduced after watching Little Mosque, but Friesen argued the results should be taken with a grain of salt.

“Past studies into similar shows have demonstrated that these results may not persist in viewers long-term,” he said.

"Humour studies tell us we should be suspicious of any claims that it changes people's minds.” Especially in the last few years, “We still see many instances of Islamophobia across Canada."

After some initial ratings success, Little Mosque was cancelled in 2012. Critical reviews were generally mixed. At the end of its run, John Doyle of The Globe and Mail called it “a great idea at the beginning. Then, over the seasons, a nice idea … it was never quite funny enough, or even memorably entertaining, to matter.”

Nonetheless, continuing global syndication following its cancellation proves the show resonates beyond our borders, said Friesen. The streaming service Hulu has since picked it up, and it now plays in more than 80 countries, a clear sign that it must be doing something right, he said.

“It seems pretty clear to me that to be able to share a joke, and laughter, is absolutely a boon,” said Friesen. “Being able to break down those walls is a huge thing."

But the larger question, he added, is whether we should look for any kind of social salvation in comedy. From his perspective, the power of humour to affect change is limited.

Can the power of humour affect change?