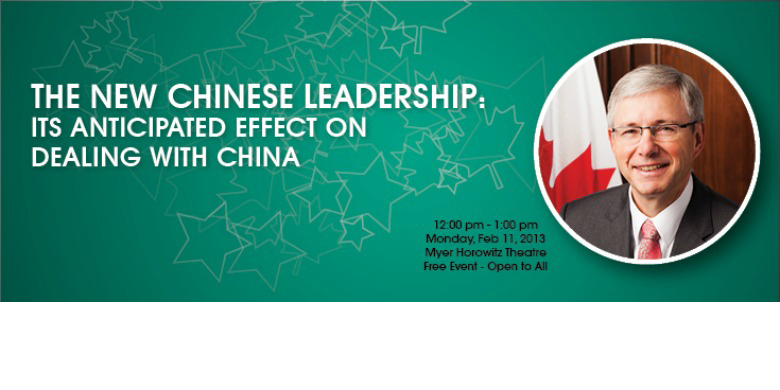 (Edmonton) Canada’s ambassador to China, Guy Saint-Jacques, will give a keynote address on the University of Alberta campus Feb. 11. The unusual appearance by a senior Canadian ambassador on a university campus is the first such outreach trip by Saint-Jacques to Western Canada since presenting his credentials to China’s president, Hu Jintao, last fall.

Saint-Jacques is expected to discuss Canada’s relationship with China during his public address, “The New Chinese Leadership: Its Anticipated Effect on Dealing With China." After his remarks, the ambassador will respond to questions from the public.

The event, organized by the U of A’s China Institute and the Government of Alberta, begins at noon in the Myer Horowitz Theatre. Roxanna Benoit, deputy minister of international and intergovernmental relations, is expected to note the importance of the Chinese market to Alberta's economy.

China Institute director Gordon Houlden says the talk comes at a good time, given the political leadership change that will happen in China in March.

“What happens in Beijing now affects the economies of Alberta and Canada, as we saw recently with the $15-billion sale of Nexen to the Chinese energy firm CNOOC,” Houlden said. “China’s new political leadership will step into office next month. So Saint-Jacques's address on how those changes will affect China's international relations, including the complex issues involved in Canada's own relations with China, is timely.”

The China Institute works closely with the federal and provincial governments to support their engagements with China—a role Houlden says is an important part of the institute’s own outreach efforts.

“The future of this country and of this province will be profoundly affected by the rise of China. For this reason, it’s essential that the university and the China Institute support both governments in their relationship with China. It’s significant that Canada’s new envoy to China has chosen Alberta as his first stop on his program of outreach in Canada; this illustrates the importance of this province. We’re very pleased to provide a platform.”