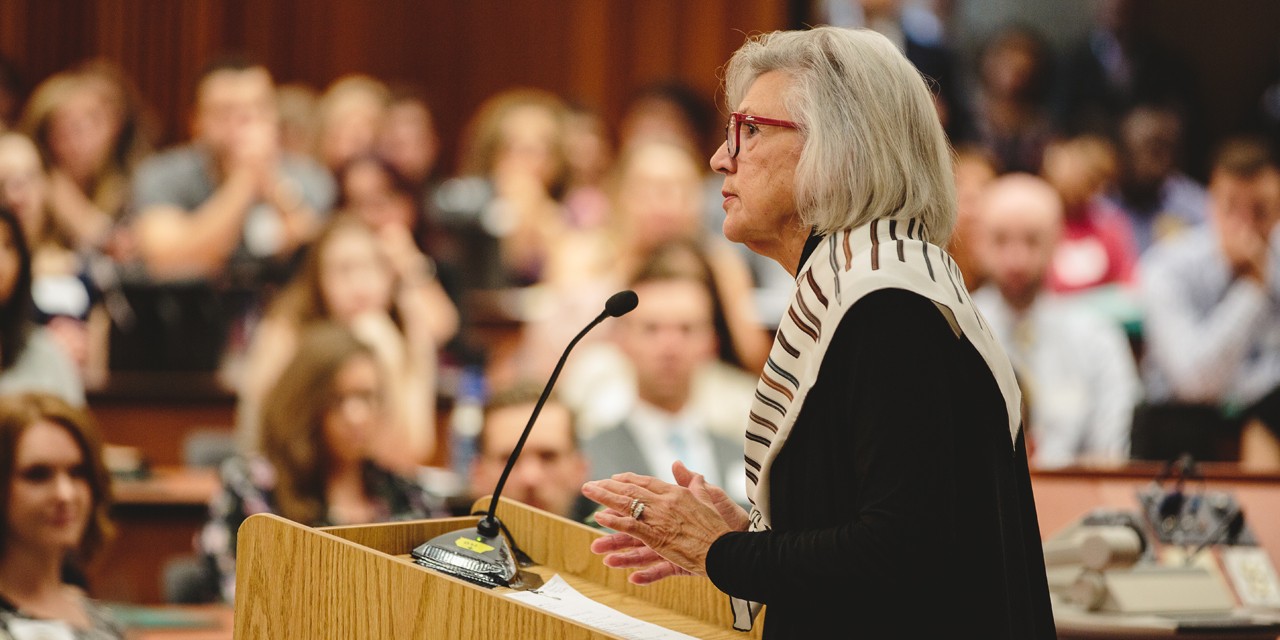 The Charter of Rights and Freedoms has been a powerful boon to Canada’s justice system, transforming the Supreme Court into one of the most highly regarded in the world, Chief Justice Beverley McLachlin told first-year students in the Faculty of Law today.

McLachlin’s orientation address was one of her last public appearances as chief justice before retiring next December, her last at a postsecondary institution. As the first woman appointed to the position (in 2000) and the longest serving chief justice in Canadian history (17 years), the U of A graduate shared insights from her long and successful legal career.

“[The charter] changed our legal system massively,” said McLachlin of the charter, adopted as part of the federal constitution in 1982 to protect the rights and freedoms of all Canadians.

“The pundits of the time said it wouldn’t amount to much, that the Supreme Court would take a narrow approach and not much would change. Well, they were wrong.”

McLachlin was first appointed as a trial judge in 1981, she said, just before the adoption of the charter. She then watched as momentous decisions began rolling in from the Supreme Court that actually made a difference in the lives of Canadians.

“The court was taking a broad, purposeful approach to the words in the charter, from the guarantee of Indigenous rights to all of the other guarantees contained there. As time went on, we realized that the charter would become a meaningful presence in Canadian law and help create a unique, distinct brand of Canadian jurisprudence. It has stood the test of time and most Canadians identify it and see it as a positive force for good.”

The charter demands, for example, that the Supreme Court hear the views of “interveners”—those who are not parties to the litigation but have a substantial interest in the outcome—when arriving at any decision.

“Those interveners are people who say, ‘I may be affected, our Indigenous group may be affected, Amnesty International, Criminal Lawyers Association’—whatever it might be…there is a very powerful ripple effect.”

As a result of the charter’s influence, many countries around the world point to Canada’s top court as an “alpha court,” said McLachlin. “Canada, which was not on anybody’s radar when I started practicing, is now a beacon in the international legal world.”

As she prepares to retire after a career spanning half a century, McLachlin told incoming students she has never regretted her decision to practice law. Born in Pincher Creek in 1943, she completed a philosophy degree at the U of A before enrolling in law school when her admission inquiry impressed then-dean Wilbur Bowker so much that he accepted her on the spot.

“I am so proud of Canadian law,” she said. “It has given me, and will give you, the opportunity to be useful, to do something significant with your life.”