Students will conduct physics experiment this summer at site of Nobel-winning discoveries. 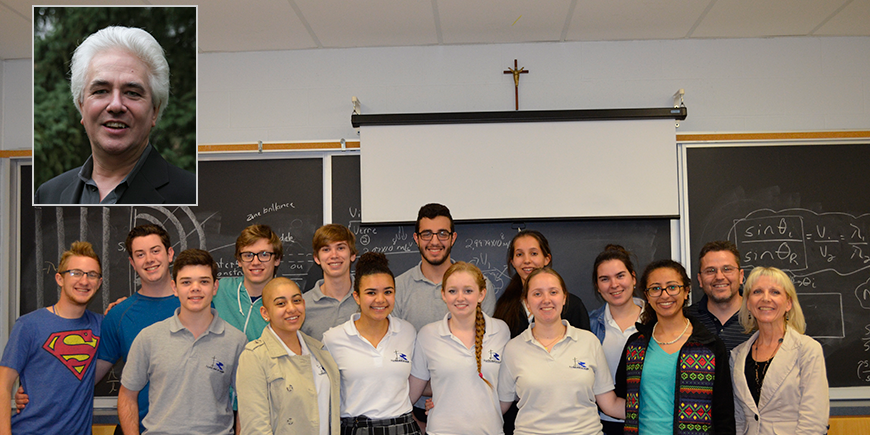 "These students are questioning the Standard Model of particle physics and trying to get a glimpse of as yet unexplored territory,” says James Pinfold (inset), who mentored the Charging Cavaliers from École Secondaire Catholique Père-René-de-Galinée in Cambridge, Ontario.

A group of high school students from Ontario earned the opportunity to conduct a physics experiment at the prestigious CERN laboratory in Geneva this summer, thanks to a little mentoring from a UAlberta physicist.

James Pinfold has been working with the Charging Cavaliers, a group of 13 high school students from École Secondaire Catholique Père-René-de-Galinée in Cambridge, Ontario, to develop what became one of two winning entries for CERN’s Beamline for Schools competition.

The students will conduct an experiment that will search for elementary particles with a fractional charge.

“These students came up with a proposal that is questioning the Standard Model of particle physics and trying to get a glimpse of as yet unexplored territory,” explained Pinfold. “Our current understanding of the nature of matter, which is expressed by the Standard Model, stipulates that only particles with integer charge can be observed.”

Pinfold is very familiar with the facilities at CERN. He is a founding member of the ATLAS experiment and Spokesman of the MoEDAL experiment, both of which are currently operating at CERN’s Large Hadron Collider. He initially helped the students determine how to best satisfy their goals with the resources provided at CERN, and will now work with them and CERN physicists to build the special detector required to hopefully detect the tell-tale sign of new, fractionally charged particles.

The opportunity to conduct the experiment, at a site of Nobel Prize-winning discoveries no less, is not lost on the students.

“I still can’t believe what happened,” said Charging Cavalier member Denisa Logojan. “I feel incredibly privileged to be given this opportunity. It’s a once a lifetime opportunity. It opens so many doors to a knowledge otherwise inaccessible to me. It represents the hard work our team has done. There’s just no words to describe it.”

The students will be supported by SNOLAB, an underground lab in Sudbury that specializes in neutrino and dark matter physics, and in which UAlberta has a stake.

The lab will provide the students with purified linear alkybenzene, a chemical compound which will be used in this special detector.

“IPP will be there to help, as it reinforces our commitment to education,” said Michael Roney, director of the institute. “It’s fantastic the students are getting this opportunity – they may even make an important discovery!”

Beamline for Schools is an education and outreach project supported by the CERN & Society Foundation, in which students compete against each other to be able to run an experiment on a fully-equipped CERN beam line like other CERN researchers.

The Charging Cavaliers were one of two student groups, out of 180 from 43 different countries, who won the honour of running their experiment at CERN.