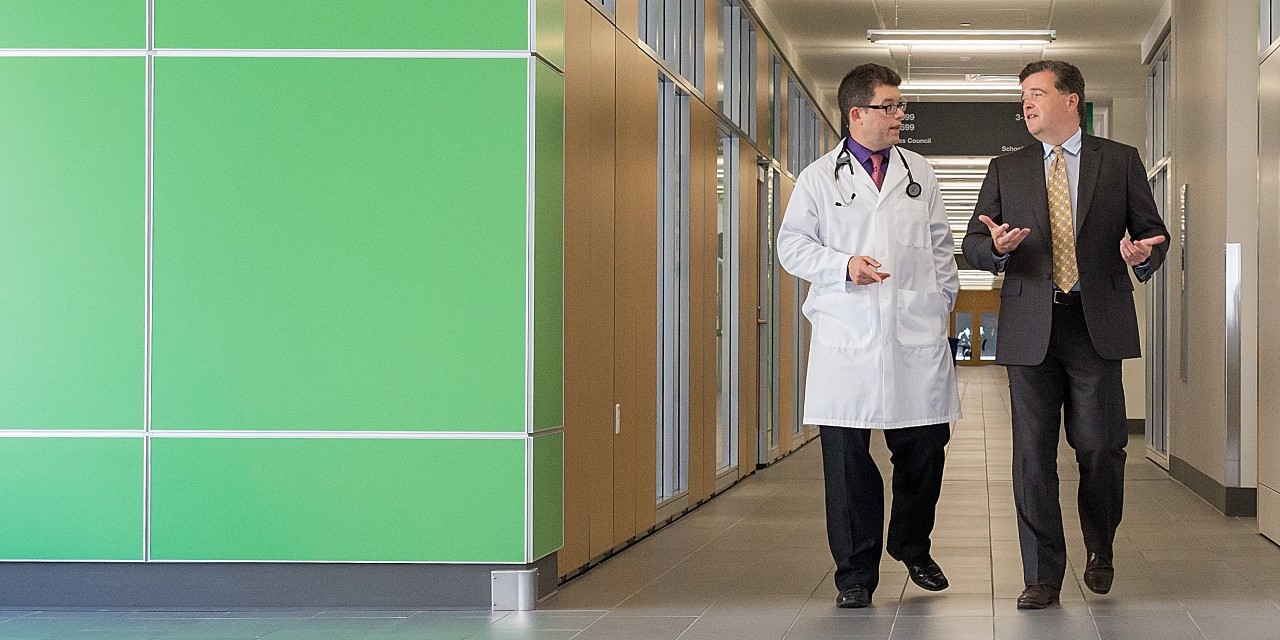 Oncologist John Mackey (left) and cell biologist Luc Berthiaume are hoping to begin human clinical trials for a promising anti-cancer drug later this year, thanks to $5 million in new funding to Pacylex, the U of A spinoff company behind the drug. (Photo: Faculty of Medicine & Dentistry)

A new cancer treatment that was developed at the University of Alberta is headed for human trials at three Canadian cancer centres by late 2020, thanks to $5 million in new funding from Edmonton-based investors.

“Taking a new idea into the clinic is a very expensive proposition because it requires regulatory approval and very careful attention to safety and quality of the drug,” said John Mackey, an oncology professor, director of clinical trials at the Cross Cancer Institute and chief medical officer for Pacylex, the U of A spinoff company behind the drug.

“The funding is absolutely essential to develop this new made-in-Alberta approach to cancer treatment,” Mackey said.

The trials will test a compound originally developed at the University of Dundee to treat African sleeping sickness and identified as having cancer-fighting properties by U of A cell biology professor Luc Berthiaume, who is chief scientific officer and co-founder of Pacylex.

“It was one of these eureka moments 10 years ago when we thought of a new way to selectively kill cancer cells while sparing normal cells and discovered the potential applications of this compound in our laboratory,” said Berthiaume. “It's great to see that the vision that I had then for a potential treatment for cancer is now coming closer to reality."

The safety of the drug, known as PCLX-001, has been evaluated in pre-clinical models and applications will be made this year to Health Canada to begin Phase 1 trials at the Cross Cancer Institute in Edmonton, the B.C. Cancer Centre in Vancouver and Princess Margaret Cancer Centre in Toronto. The Edmonton trials will be undertaken by associate professor of oncology Randeep Sangha. The company will also seek approval from the U.S. Food and Drug Administration for future trials in patients there. The researchers acknowledged that the COVID-19 pandemic may slow the clinical trials process due to strains on regulators and the health-care system.

“Assuming that everything goes according to plan, we could have the first patient on trial in the last quarter of 2020,” said Mackey.

The researchers said that along with government research dollars, about $2 million raised from their family and friends were used to pay for earlier steps in the drug’s development. The more than $486,000 raised at the World’s Longest Baseball Game, held in the summer of 2019 by the Cure Cancer Foundation, will help pay for getting the drug ready for patients. The new dollars from investors will defray the costs of regulatory review and oversight of the clinical trial. Further funding will also be sought.

Berthiaume said the drug was shown in the lab to be more effective than the top two existing drugs for lymphoma and leukemia. It has also shown action against breast, colon and lung cancers in cell culture or animal models.

In the Phase 1 trial, patients with Stage 4 cancer who do not respond to existing treatments will be invited to take increasing doses of the drug to establish a balance between the safest and most effective levels.

“This is the kind of altruism that goes into testing cancer drugs,” said Mackey, who leads the Alberta Pre-Phase 1 Cancer Program, which supports the clinical development of academic research discoveries. “You’ve got to know that the drug may not help you, but it might help someone else.”

“The majority of patients don’t benefit from a Phase 1 treatment because the doses are too small, but there are drugs that have had amazing effects in Phase 1,” Mackey said.

“The Pre-Phase 1 Program is starting to bear fruit, and we’re very excited that this will be the start of a flowering of anti-cancer ideas coming from all faculties including medicine, chemistry, physics, engineering, radiation physics and biochemistry,” Mackey said.

A recent $1-million Award in Hematological Cancer Research in Memory of Dr. Rachel Mandel from the Alberta Cancer Foundation will be used by the Berthiaume lab to help understand the mechanism of action and potential future applications of PCLX-001.

”Great strides were made in diabetes with the Edmonton Protocol, and this could be the next breakthrough story coming out of the University of Alberta,” said Berthiaume.