Cancer opens your eyes to what's important, and it's not financial gain. 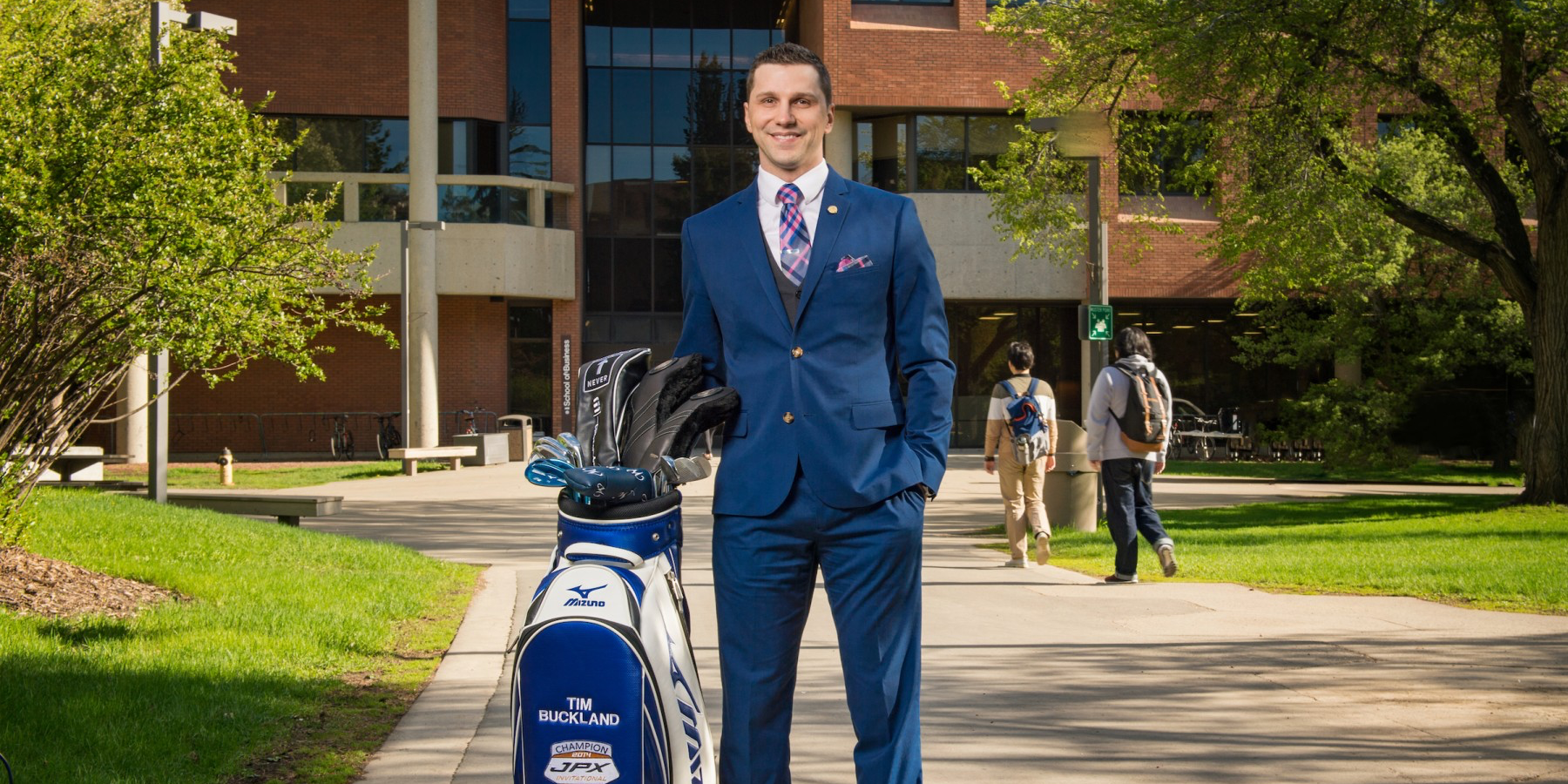 After three bouts of cancer, MBA graduate Tim Buckland has found solace on the golf course and helping others with their cancer struggles. (Photo by Richard Siemens)

Tim Buckland was on the brink of adulthood when he was diagnosed with testicular cancer. He received the news one week before his 18th birthday, and as a highly fit hockey player and passionate golfer, he found it hard to believe.

The tumor was removed immediately and successfully, and Buckland was determined to put the whole ordeal behind him and move on. And for a time he did. A talented golfer with a four handicap—accustomed to playing 70 or 80 rounds per year from the time he was eight—he focused all of his energy and attention on the upcoming season, and soon after started a bachelor’s degree in science at the University of Alberta.

But the cancer struck again when he was 21—not once, but twice, after surgery failed to remove the entire mass. He went through four rounds of chemotherapy, realizing the disease was more than a blip in his life now.

“This time I knew it was a big deal,” he told Leap, a publication of the Alberta Cancer Foundation. “I couldn’t avoid talking about it. I was having some psychological effects, anxiety and some cognitive issues that were interfering with my school.”

He eventually found help with Young Adults Cancer Canada, a support group with whom he could share feelings. He also shifted his academic focus, following up his first degree with a master’s in biochemistry, specializing in breast cancer research.

It gradually dawned on him that his life’s path lay in helping others face what he had to endure.

"I love science, and think it's the coolest thing on Earth, but I wasn't able to get the same passion behind it,” said Buckland. “I didn't want to work in academia because I decided it was too far removed from patients and those I really wanted to help.”

“I'm ambitious, so I decided to come back and do an MBA," specializing in public policy management, he said. “Cancer opens your eyes to what's important, and it's not financial gain. Even in the MBA program, it's not really my driver. I think my fight with cancer changed me a lot, and also knowing what I'm good at and want to help people with."

Golf still plays a crucial role in Buckland’s life. It’s been perhaps his most consistent form of therapy over the years. In 2014 he entered a contest to compete in Mizuno’s JPX Invitational tournament requiring him to answer the question: what can you do with golf to make your life better? He told his cancer story and was the only Canadian accepted to the tournament in Georgia. He ended up winning it.

Now graduating, Buckland isn’t sure where this third degree will take him, only that it will likely be linked to some form of cancer activism: “It may not be a conscious thing, but it drives me all the time.” And if golf can play a role in whatever he ends up doing, so much the better.

He now sits on the provincial advisory council for cancer as a young adult specialist, advising the council on how the disease affects young people and what resources will meet their particular needs.

“What impresses me most about Tim is how he leads by example,” said Andrew Luchak, one of his business instructors. “He follows through on commitments, always sees the positive in situations or challenges, and is kind and genuinely interested in helping others.

“He also has a sharp intellect, balanced nicely by both a quiet confidence in all he knows and truthful humility in what is yet to be learned. It’s easy to like Tim, not least because of how he applies his talents for the betterment of others.”

Added Buckland: “I've always felt supported in every degree, but in the MBA there are so many people trying to help you. I'll definitely miss it."