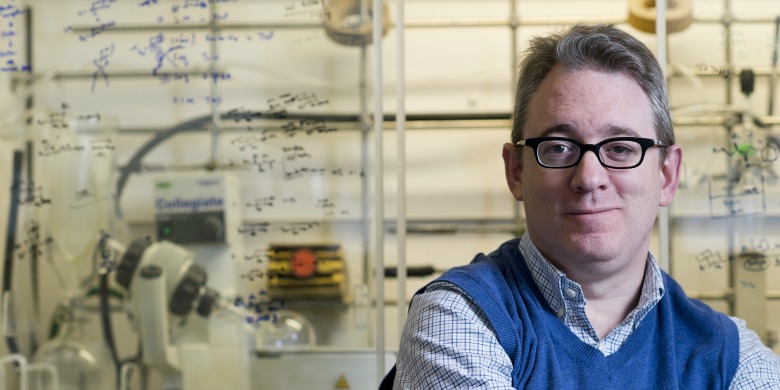 121012-toddlowary-banner
Todd Lowary is working on cracking the tough defences of the bacterium that causes tuberculosis. (Photo: John Ulan)

(Edmonton) Half a century ago, it seemed tuberculosis might finally be eradicated. A new vaccine and improvements in public health resulted in a 90 per cent decrease in mortality rate by the 1950s, at least in the Western world. But by 1993, the re-emergence of drug-resistant strains of the disease caused the World Health Organization to declare a global emergency.

It’s estimated that one-third of the world’s population has been infected with TB, mostly in Asia and the former Soviet Union, and it still kills a million people every year.

In recent years, however, scientists have been hard at work decoding TB’s defences. Chief among them is the University of Alberta’s own Todd Lowary, a carbohydrate chemist who first got interested in the TB bacterium because of the “weird and unusual” structure of its cell wall, which consists of very dense, impenetrable carbohydrates.

“It’s complex and unlike anything else that’s been identified in nature,” says the recipient of two U of A awards this year recognizing his exemplary accomplishments in research and teaching—the Killam Annual Professorship and the Rutherford Teaching Award, the university’s highest honour for teaching excellence.

In one sense, Lowary’s success is no surprise. He is one more in a long tradition of carbohydrate-chemistry stars at the U of A that began with the world-famous Ray Lemieux. In the words of one Oxford professor, Lowary’s “incisive use of outstanding organic chemical methodology to strike at the heart of the biology of TB is near unique and has enormous potential to answer hugely important questions.”

In theory, says Lowary, the more we know about the cell wall’s structure, the closer we are to developing drugs that can break it down. That crucial knowledge has only emerged in the last two decades, and the journey from basic research to effective treatment is always a long one.

But he says he has made huge strides. “We’ve come a long way with this work, but what we do is very fundamental.”

Lowary’s team is also trying to come up with better diagnostic tools for TB, and toward that end received funding earlier this year from the Bill and Melinda Gates Foundation to examine blood samples of infected patients, screening for the antibodies that attack TB carbohydrates.

Collaborating with fellow chemist Jillian Buriak and pediatrics professor Lori West, Lowary is also helping to improve heart transplants in infants. West discovered that it’s possible to successfully perform heart transplants that cross the blood group barrier in newborn babies—making it possible, for example, to take an A-type heart and put it in a B-type child. The window for the transplant, when the baby’s immune system is not yet fully developed, is about six months. But Lowary and Buriak are working on nano-materials with the right blood-group antigens that could keep a child alive until a transplant donor is identified.

On his Rutherford Teaching Award, Lowary waxes modest. “I don’t have any great secrets or sage advice,” he claims. “I’m not particularly eloquent or articulate, and I have a pretty traditional approach to teaching. But I do ask a lot of questions to draw students out and personalize the experience for them. As much as possible, I try to bring in real-world relevance to my undergraduate lectures.”

Says one colleague of Lowary’s student evaluations, “Every one of the students commented on the startling fact that Professor Lowary knew every student’s name by the time of the first midterm, even in classes of over 100 … [which] speaks volumes about his commitment to undergraduate teaching.”