Solving a problem in our atmosphere is no good if we just create a different problem inside our planet. 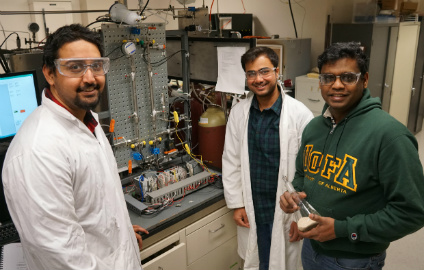 UAlberta researchers are studying the challenging technology and finding options for captured carbon. 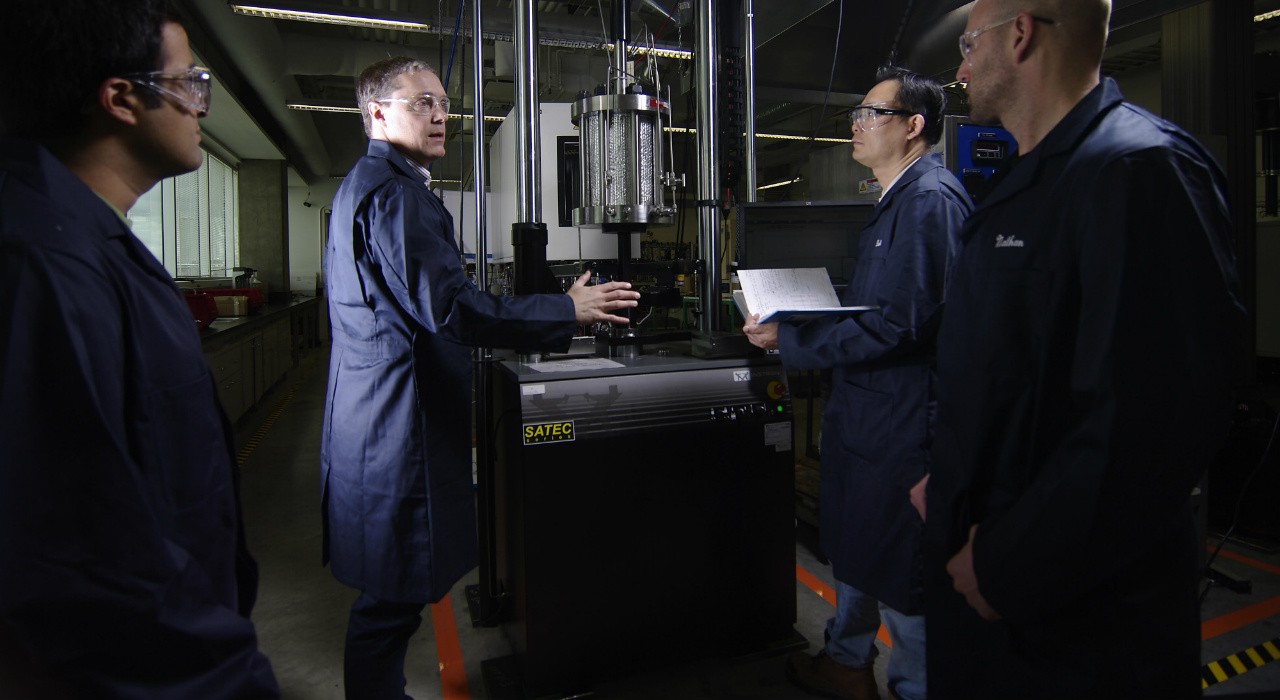 Future Energy Systems principal investigator Rick Chalaturnyk in his lab. Chalaturnyk and his colleagues are researching technologies to tackle the challenges of carbon capture and storage. (Photo: Hope Walls)

Carbon capture and storage technology captured global headlines in 2014 when it was unveiled at the Boundary Dam coal-fired plant in Saskatchewan. By capturing greenhouse gases for reuse or storage deep underground, “CCS” was lauded by some as a panacea for climate change.

But the Boundary Dam installation was over budget and a year later, its system was revealed to be functioning less than half the time. Disappearing from the headlines, it was presumed by many to be dead.

Not so, according to University of Alberta civil and environmental engineering professor Rick Chalaturnyk.

“If you want to prevent gigatonnes of CO2 from getting into the atmosphere right now, this is still your option,” he said.

Both the International Energy Agency (IEA) and the Intergovernmental Panel on Climate Change (IPCC) have identified CCS as an important tool for hitting emissions targets. In 2016, the Australian government committed $23.7 million to CCS projects after a series of major blackouts led to concern about the stability of the country’s power supply, and an increased interest in coal-fired energy production.

When the U of A received $75 million from the Government of Canada to launch the Future Energy Systems research initiative, CCS technology—along with ways to use captured CO2—became an important part of the program.

The first CCS challenge is the sheer cost of capture.

Right now, emissions need to be showered with solvents at high temperature, dissolving and trapping the carbon dioxide so it can be boiled out later. The process is energy-intensive and expensive, but alternatives are under development.

For example, U of A chemicals and materials engineer Arvind Rajendran is testing solid sorbents that could attract the CO2 right out of the emission stack.

“An adsorbent—not absorbent—causes molecules to stick to it, and then you can scrape them off by reducing the pressure,” he explained. “It’s similar to when you put a box of activated carbon in your fridge to reduce odours.”

This type of pressure swing adsorption technology is already used in the medical field to draw pure oxygen out of the air and in petrochemical industries to purify hydrogen. Rajendran thinks it’s just a matter of time before it can be adapted for widespread use in the energy industry.

Chalaturnyk agrees, which is why he continues to work on a very significant question: what to do with the carbon dioxide once it’s been captured.

There’s no point capturing CO2 unless you can store vast amounts of it, and putting it underground seems like a convenient solution. But there are questions.

“It’s easy to say, ‘Let’s just put CO2 back into the basins we got the oil out of,’” Chalaturnyk explained. “But pumping super-pressured carbon dioxide kilometres below the surface is very different than sucking out oil.”

There are three main concerns along the way: injectivity—whether the CO2 will make it down a shaft into a reservoir; conformance—whether it’ll do what we expect when it gets there; and containment—whether it will escape.

Chalaturnyk worries that if CO2 is hastily pumped into supposed storage sites without adequate understanding, any resulting leaks could have consequences—and potentially turn the public against CCS technology.

“The reality is we need to do this, at scale—and soon—or we’re not going to be able to hit our emissions targets,” he asserted. “But solving a problem in our atmosphere is no good if we just create a different problem inside our planet.”

Predicting and preventing these problems is tricky. His group is building mathematical models and 3-D printing rocks so various geological faults can be tested under different temperatures and pressures. But the most important knowledge needed in this area can’t be found in a lab.

“We need to study more examples at scale,” he said. “The more well-designed and executed test projects we see around the world, the more we’ll understand about what happens when we do this in real life.”

With that in mind, Chalaturnyk recently travelled to Australia as part of an academic panel reviewing a CCS project. He’s also consulted on projects like Aquastore and Boundary Dam in Canada, and others around the world. He said each has unique advantages and disadvantages, but they all offer lessons that can be useful when the technology becomes more widespread.

Storage is the immediate concern in the carbon capture world, but not the only one. Many think utilization of captured carbon dioxide will be an important part of humanity’s energy future. For now, the most common industrial use for captured CO2 is to pump it into oilsands to make bitumen easier to extract, but there may be uses that eliminate emissions altogether.

Chalaturnyk hopes those utilization technologies and other renewable energy sources can mature quickly, but his focus remains on the gigatonnes of carbon dioxide that could be emitted before they’re ready.

“I doubt anyone in this field expects to be doing it in 60 years,” he said. “But we have to get there. And we can’t get it wrong.”