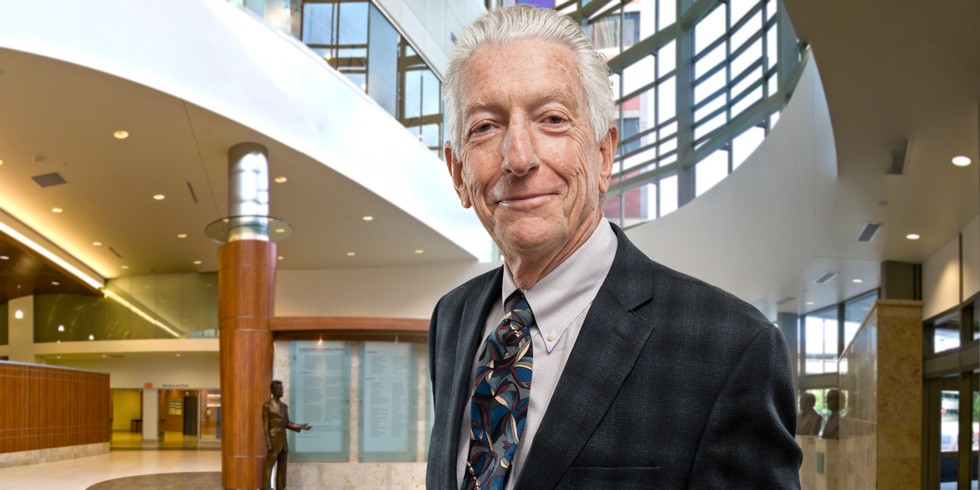 Order of Canada recipient Paul Armstrong has seen health care in Canada improve dramatically over his career, but he says there's still room for better use of resources, public engagement and focus on quality of life. (Photo: Richard Siemens)

If young Paul Armstrong had been told that he would one day receive Canada’s most prestigious honour, he probably wouldn’t have believed it.

“This was not on my radar,” he laughed. “As a small-town boy from northern Ontario who grew up in an area that doesn't have a university, it's very special. There were no icons where I was. This was beyond my imagination.”

The University of Alberta cardiologist was named an officer of the Order of Canada recently for his transformative research in acute cardiac care.

The founding president of the Canadian Academy of Health Sciences, Canada’s foremost fellowship of experts who inform national health policies, Armstrong was also recognized for his leadership in Canadian health care.

“He played a major role in developing the Canadian VIGOUR centre (Virtual Coordinating Centre for Global Collaborative Cardiovascular Research), which is recognized for doing excellent clinical trials in cardiology,” said Lorne Tyrrell, a fellow officer of the Order of Canada and former dean of the the U of A’s Faculty of Medicine & Dentistry. “He led a major study on the use of clot-busting drugs in ambulances for early intervention in acute cardiac diseases. This was an important step in the evolution of treating heart patients and is now being explored for stroke patients.”

The honour is the latest addition to Armstrong’s list of national accolades, which includes winning the Prix Galien Canada Research Award, as well as being awarded the U of A’s University Cup and being named a Distinguished University Professor.

“The privilege of working in a university environment gives you endless opportunities to do things that you couldn't do otherwise,” he said. “It's a great thing to wake up in the morning and only be limited by your ideas, your curiosity and talents, and willingness to work hard to make a contribution. I'm so grateful and feel very privileged to be able to give back and be recognized at the same time.”

Armstrong has seen remarkable changes throughout his career but continues to set his sights on improvement. He hopes to see a shift in Canada’s approach to health care, starting with better use of resources, increased public engagement and a greater focus on quality of life.

“Since I started out, the hospital mortality for heart attack has fallen from 30 per cent to about five to seven per cent, which is an extraordinary thing,” Armstrong said. “But I worry that we’ve built a health-care system where death is sometimes looked at as a medical failure rather than a natural evolution.

“We need to do better in using the substantial resources that we're allocating to health. And I think we can do that. There are ways and means of making wiser and more cost-efficient choices,” he noted.

“I'm cautiously optimistic that we're headed in the right direction, but we need to get people's attention, we need to listen and we need to engage young people.

“So I'm tickled pink that in March I'll be spending a couple of hours in high-school classrooms talking to young people about choices and some of the opportunities in medicine, but also hopefully awakening them to some of these issues.”

Armstrong joins political scientist Janine Brodie as the 2018 Order of Canada recipients from the University of Alberta. Local philanthropist Eric Schloss, an alumnus who founded the U of A’s Canadian Literature Centre, was also named to the Order of Canada.

‘Never boring’: New book recounts life and legacy of composer Malcolm Forsyth
U of A scientist lending expertise to NASA Mars 2020 rover mission
Tiny versions of ancient spear-throwing weapons were likely used to train children, U of A archeologists find
Up to 70 per cent of us feel like a fraud, says U of A psychologist
Agricultural ‘mini-internship’ gives U of A students hands-on career experience
Elder-friendly care after emergency surgery dramatically improves outcomes for older patients: study
Newsroom