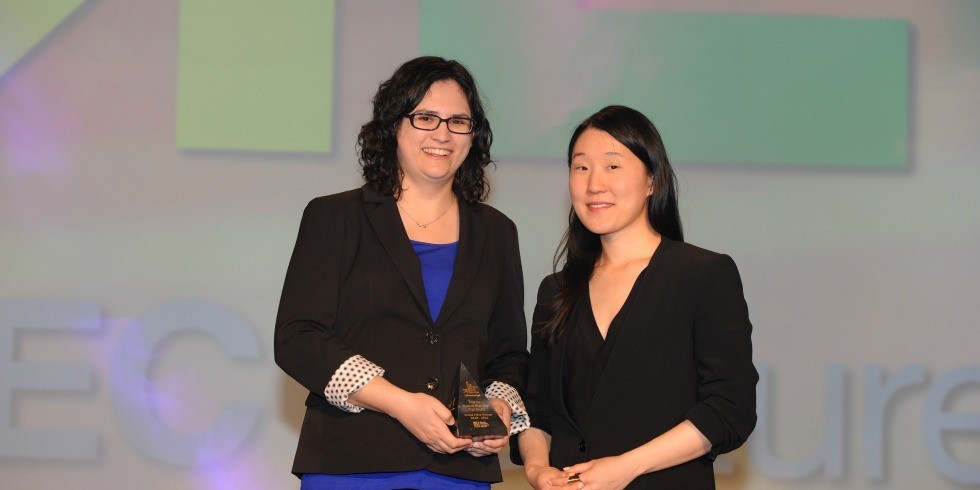 (Edmonton) Neesha Desai and Kit Chen, PhD students in computing science, are destined for greatness. The two are reigning supreme among student entrepreneurs as the inaugural winners of the Ross and Verna Tate Science Entrepreneurship Award for their student startup Alieo Games, an educational technology company.

The award supports a meritorious science-related startup company with $50,000 to further the development of their product or service. In September, Desai and Chen’s Alieo will be evaluated and, if successful, Desai and Chen will be given the opportunity to meet with venture capital funders in California.

Desai, who graduated this year, and Chen are carving out a niche for themselves in the educational technology sector and the current trend toward personalized learning. “Right now, ed tech and machine learning are really big,” says Chen.

Alieo’s first product—COW (Creative Online Writing)—is novel within its market. “The vast majority of games out there, especially for the age group we’re working on, focus on math and reading. Both of those [subjects] are easier for computers to do because there’s a right or wrong answer and there’s not a lot of analysis involved.” Writing is much more difficult, notes Desai, because of the nature of the content. “Focusing on writing also allows us to target a broader audience than a lot of other programs out there.”

COW features a program loop that provides statistical feedback to students so that they can edit their story to improve it. “One of the wonderful things about technology, and ed tech specifically, is that we don’t feel the same way when [a game or computer] tells us we’ve failed as when a person tells us we’ve failed,” explains Desai.

Games are a great example of this: people will willingly play the same level over and over again because they believe they will be more successful in their next attempt. Says Desai, “You don’t see kids doing that with a writing assignment. With COW, we’re motivating them to use editing to make their writing better.”

Chen and Desai have analyzed user stats and found that many of the users are logging in to write in the evenings and weekends. “It’s not that it’s necessarily homework,” says Desai. “They’re just excited to get on and write.”

Adds Chen, “It’s not just about writing. The most important part for kids is probably the sharing aspect. So when they finish, they post their story for classmates to read, they read each other’s stories and give them a smile to show they like it.”

Since launching COW in February 2015, the Alieo team has had positive feedback from the more than 30 schools and 1,000 users in grades 2 through 10, mainly from Western Canada but also from as far away as Georgia.

Why a student startup?

“One of the best things about a university is that you’re going to find like-minded people,” says Desai, who met Chen while climbing.

Chen agrees. “When talking to each other, it just became clear that we were on the same path.”

Through their experiences in grad school, Chen and Desai felt well prepared to tackle entrepreneurship. “At this point in life, it seems like there’s nothing to lose by trying to make a company, to see if we can make something real that can pay us and we can be successful at,” says Desai.

Both acknowledge the invaluable support from the university and local community for student entrepreneurs. “When you’re a student, you’re so vulnerable, so people just want to reach out and nurture you,” says Chen. “Our graduate supervisors have also been incredibly supportive of our business ventures.” Chen is supervised by Michael Bowling of computer poker fame, and Desai is supervised by Duane Szafron. The pair also note that working with eHUB has been an invaluable experience to share best practices with other student entrepreneurs.

When asked for advice for other budding student entrepreneurs, Desai and Chen suggest reaching out for help early on, being open to criticism, and knowing you don’t have to take every piece of advice given. Says Desai, “Every time you hit a wall or fall down, at the end of the day, it’s been the community that has continued to lift us up and move us forward.”

Adds Chen, “See where you can go by just taking one step forward.”

What winning the prize means

To move Alieo that one step forward to the next level of success, Chen and Desai say it’s important to devote their full attention to the company and seek investors, an opportunity now afforded to them through the Ross and Verna Tate Science Entrepreneurship Award. They can now also pay other partners and contract design staff.

Both acknowledge the challenges they faced as students establishing a startup. “On the one hand, you have all this perceived ‘free time,’ but on the other hand, you don’t have any of these savings of someone who has been working for 10 years,” says Desai. “That’s the best thing about the Ross and Verna Tate Award—recognizing that you need to be working full-time as a student on your product if you want to get it out there.”

Chen and Desai see the award as validation from the community that they are on the right path. “Ideally in less than 10 years, we’ll be able to give back to places that have helped support us getting here,” Desai concludes. “That would be ideal—that not only are we able to pay ourselves, but that there’s money there that we can turn around and say, ‘We were there, we knew what it was like to be a student.’”