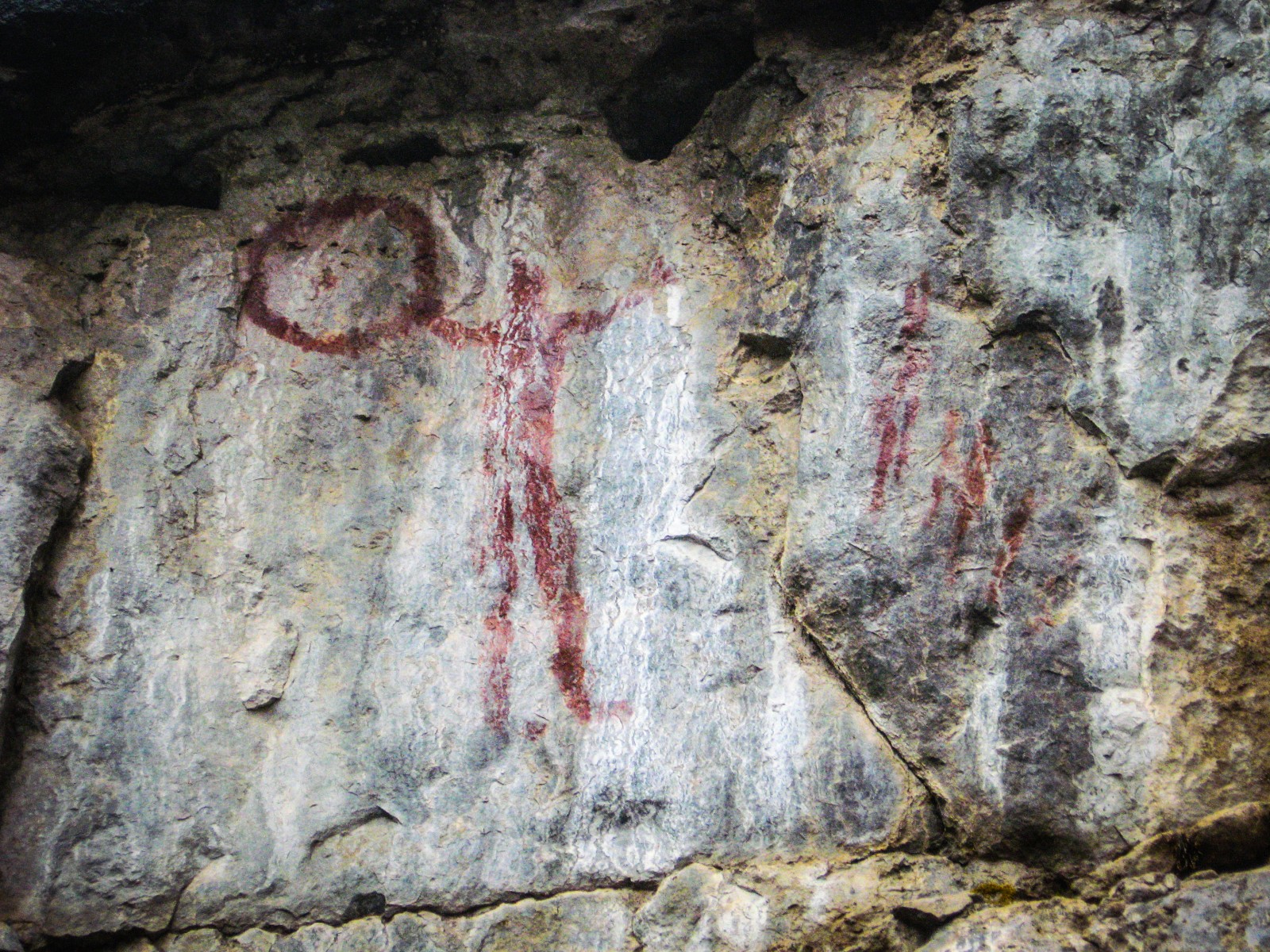 The pictographs in the Grassi Lakes area are thought to date back more than 1,000 years. (Photo: Maureen Flynn-Burhoe via Flickr, CC BY-NC-SA 2.0)

With the guiding motto, “always indigenize,” two UAlberta scholars set out to rewrite the history of early mountaineering in the Canadian Rockies.

Indigenous peoples left their mark on the Grassi Lakes area near Canmore, Alta., long before the lakes were named after Lawrence Grassi, an Italian who emigrated to Canada in 1912. (Photo: necopunch via Flickr, CC BY-NC-ND 2.0)

It hit with the force of an epiphany.

Zac Robinson had been hiking near Canmore when he came across pictographs on a climbing crag. A mountaineer and climbing historian, he felt he knew the Grassi Lakes area pretty well and had come across that rock any number of times. But this time he realized he had no idea what it was trying to tell him, and it stopped him in his tracks.

“It was surrounded by all of these imperialist names, these signifiers that are meaningful and important to climbing in that particular place,” said Robinson, a University of Alberta historian, himself of Cree heritage. “But that rock painting seemed so foreign and illogical—it didn't fit at all."

The origin of those painted images—more than 1,000 years old—isn’t known. Some believe they were painted by ancestors of the Ktunaxa (Kootenay) peoples. But one thing is clear: people had populated and travelled through the Rockies and their foothills long before European settlers arrived.

For Robinson, however, the silence of that inscrutable rock spoke volumes—a striking metaphor for the conspicuous absence of Indigenous people in almost everything he’d read about the early climbing history of the Rocky Mountains.

Whose mountains are they anyway?

Robinson had taken a graduate course in mountaineering literature with U of A post-colonial specialist Stephen Slemon, so he knew how steeped that literature was in the tropes of colonialism—the conquest narrative, the "enormous colonial arrogance in the idea of first ascent,” not to mention naming every mountain and lake after icons of the British Empire.

“When most people think of other mountain places in the world,” said Robinson, “they think of the Sherpa people of the Himalayas or the Indigenous peoples of the Andes. When they think of our Rocky Mountains, however, they tend not to think of First Nations or Métis people. They're not there in the picture. Why not?"

Setting out to answer that question, Slemon and Robinson decided to collaborate on a revision of early mountaineering history. This time, however, they wouldn’t just consider the Indigenous perspective; they would start with that perspective and use it to filter everything they wrote, exposing what they call “colonialist research blindness.”

As part of the U of A’s Mountain Studies Initiative, it’s exactly the kind of revisionist work called for in Canada’s Truth and Reconciliation Commission report to “indigenize Canadian history.”

"There has been a tendency all across mountaineering history to focus on the summits, the first ascents, the monuments of achievement, and there is an obvious overlooking of the infrastructure that gets people there,” said Slemon.

“What’s always made mountaineering history possible is the work of local peoples. They’re the ones who provisioned the expeditions, managed the horses, navigated the approach routes, carried the heavy loads, pitched the tents, cooked the food, read the weather and ensured the climbers’ safety. But most mountaineering literature represents those Indigenous experts as little more than support players.”

Slemon and Robinson point out, for example, that Indigenous people were essential in laying the original rail line through the Rockies in the 1880s and, when it was completed, helped build walking trails for the tourism boom that arrived in its wake. The rise of the commercial outfitting industry, however, displaced the Stoney Nakoda peoples, who “suddenly found themselves redefined as ‘poachers’ in the eyes of park officials, tourists and tourism developers, and excluded in the name of game and sport hunting,” Robinson said.

“In Canadian climbing history,” added Robinson, “Indigenous people tend to appear only in the introductory chapter, and then exit stage left, after a treaty signing and the construction of a railway line. It has always been a cruel lie, distorting the actual lives and histories of people who were fully present in the transforming landscape of the late 19th- and early 20th-century Canadian Rockies.”

Also missing from the settler histories is the subversive notion that some people climb mountains not to be on top of them but rather to be with them, a very different way of imbuing landscapes with meaning.

"Our motto, and one we’ve learned from others, is ‘always indigenize,’ because indigeneity is everywhere, even in places where you don't think it is, while seeming to be nowhere,” said Slemon. “That's what we're trying to do."

A new approach to Indigenous research

Before taking their research premise any further, however, Slemon and Robinson approached the Stoney Nakoda First Nation to see whether they were interested in collaborating. The response was telling.

“They told us that no one in any university had ever come to them first—before designing a research project, before organizing a research plan, before setting the research priorities, before conceptualizing the probable research outcomes.

“That we had done that first—with a genuine openness to the co-design, the co-production, the co-management of research knowledge—to them made all the difference.”

Bill Snow, a consultation manager for the Stoney Nakoda, said the invitation did come as a surprise. A lot of research is done on their land, he said, but it tends to be “from a Western science perspective.

“What we’re asking government and other researchers to do is to also consider traditional knowledge as part of their studies,” he said, noting that this project is a great example of that.

Retracing the history of exploration

In the near future, Slemon and Robinson hope to participate in a cultural monitoring trip on horseback, organized by the Stoney Nakoda. They plan to retrace early exploration routes—south from the Kootenay Plains along the eastern slopes and foothills of the Rockies—through the lens of traditional First Nations knowledge. They will meet with elders, travel with Indigenous youth and document the trip on video.

“It’s different from environmental monitoring of conventional scientific method, taking into account our understanding of place and how we understand animals and their habitat and behaviour,” said Snow.

“It will allow us to go out and capture information we don’t normally get a chance to capture.”

Slemon and Robinson are committed to taking their work beyond the academy to a general audience, especially the global mountaineering community. Last December they published an article in the Alpinist magazine, examining how the early exploration of the Rockies was made possible by its Indigenous people and how their names for the mountains—including "The Shining Mountains” for the range itself—were written over.

“It’s a good example of what is possible in terms of going back and understanding our history,” said Snow. “That’s what we need—that kind of collaboration.”