All of my students in all of the games courses I teach seem to know Pokémon inside and out. I would argue that in some ways it’s the first meaningful cultural touchstone of almost an entire generation. 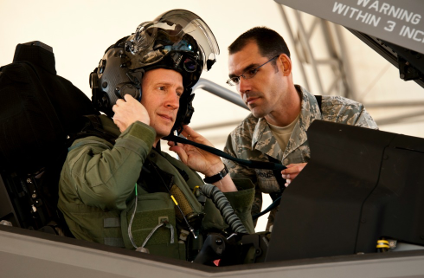 A pilot wearing a special head-mounted display in the helmet of his F-35 jet fighter is one of the most sophisticated examples of augmented reality. (Photo: U.S. Air Force/Samuel King, Jr.)

Catch ‘em all, sure. But does Pokémon Go signal the rise of augmented reality?

UAlberta experts split on what popularity of Pokémon Go means for future of gaming and entertainment. 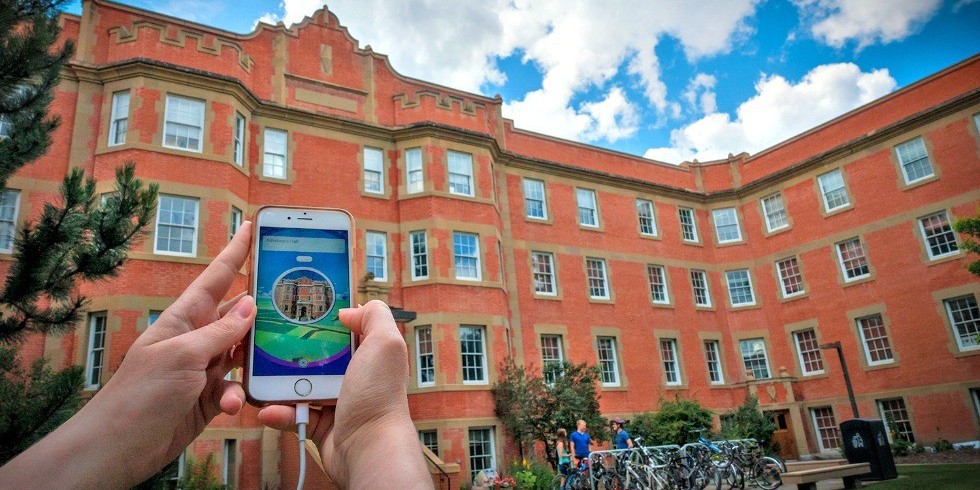 A Pokémon Go game player stops to replenish supplies at a PokéStop outside Athabasca Hall.

Normally, it’s a short 10-minute walk from the office to the Arts Building on the University of Alberta’s north campus. But on this day, there are several not-so-real-world distractions that drag things to a slow-Poke crawl.

Then, a fluttering Zubat is waiting at the bottom of the elevator. Gotcha! A few steps later, it’s time to check in at a PokéStop and replenish supplies.

There’s another Zubat at the west end of Quad, followed by a Pidgey on the east side and then another PokéStop. A wild Shellder appears out of nowhere near Triffo Hall.

Inside the Arts Building, a quick glance at the clock shows there are still 10 minutes before an interview with U of A gaming guru Sean Gouglas—time enough to bag a wild Spearow. The impulse to “catch ‘em all” in Pokémon Go’s blending of the virtual gaming space and real world is omnipresent, and mirrors the cultural phenomenon it's become.

“They played it either with cards or TV shows or the games themselves. It’s this incredibly robust game system that adults grew up with and kids are now growing up with,” says Gouglas, an associate professor of humanities computing and lead instructor of the U of A’s Understanding Video Games massive open online course.

Couple that nostalgic appeal with the ubiquity of smartphones, the game’s “amazing GPS database” by developer Niantic and favourable midsummer timing, and you have the makings of a hit, Gouglas explains. It already has more users in the United States than Twitter and though it isn’t officially available here in Canada, it’s been pretty easy to spot players through their seeming aimless wandering, phones in hand, across campus.

Pokémon Go has managed to deliver where other augmented reality games have failed. Augmented reality uses technology—sensors and cameras—to blur the lines between the virtual and real world. It’s been around for years, including in gaming (Gouglas’ students even designed their own game as far back as seven years ago), but such titles are still a niche market.

“AR games have been interesting but they’ve never married technology and amazing intellectual property quite like Pokémon Go,” adds Gouglas, senior director of interdisciplinary studies in the Faculty of Arts.

The blurring of virtual and reality

Despite its popularity, Pokémon Go is a poor example of augmented reality because players are almost solely immersed in a virtual gaming space on their phones, with little interaction with the real world, contends Pierre Boulanger, Cisco Research Chair in Healthcare Solutions at the U of A.

Augmented reality is being used by companies like Boeing and BMW for mechanical training. In the case of BMW, the user wears a head-mounted display (tricked-out goggles) that registers sensors on a vehicle engine and displays virtual images that show which parts to remove and when.

“There has to be an alignment between the virtual world and the real world, and that’s what a sensor does. You have to find those reference points,” explains Boulanger, a professor of computing science in the Faculty of Science

Boulanger’s own lab is developing “projected augmented reality,” a technique that combines CT scans and MRIs and projects that information onto surgical patients, to assist with medical training.

“It’s like X-ray vision, but with no goggles or glasses or cellphone,” Boulanger says.

But some of the most impressive augmented reality innovations have military applications—the F-35 jet fighter being the most advanced. Each jet is outfitted with six high-resolution infrared cameras that send information to a $400,000 head-mounted display on the pilot’s helmet. Instead of relying solely on eyesight, pilots can augment their perspective using the camera’s lenses to see at night—or even make the floor of the cockpit disappear to see the airspace below. (Think Wonder Woman’s invisible jet.)

Advances in 3-D sensor technology and the availability of high-speed video and graphic cards means augmented reality is going to become more common, says Boulanger, who sees it as “the future” of entertainment and new media. Imagine, he says, a cinematic experience that plays out like Police Story, where you’re in a remote area outfitted with a head-mounted display or cellphone and start to uncover a crime and resulting narrative.

“They are truly the new media,” says Boulanger, who points to big players such as Google, which is investing heavily in innovations such as its augmented reality tablet Tango.

The success of Pokémon Go is good news for the gaming industry and rights holder Nintendo, which was desperate for a hit amid flagging stock values, says Gouglas, who hopes it signals a renewed vibrancy and willingness to take risks at the longtime gaming brand. But overall, he isn’t convinced Pokémon Go will lead to an influx of augmented reality games or virtual entertainment given the time investment and space required.

“I’m universally skeptical that one game is going to change people’s habits forever. There have been lots of promises about augmented reality for years. We’ll see,” he says. “It’s a hard sell when some people just want to sit and be inactive.”

It’s likely just a matter of time before Pokémon Go’s popularity fizzles or gives way to the next new gaming or digital phenomenon. But until then, it’s game on for millions of fans. Just remember to look up once in awhile—and plan your time accordingly!

Catch ‘em all, sure. But does Pokémon Go signal the rise of augmented reality?
Newsroom