Celebrating 100 years of medicine at UAlberta 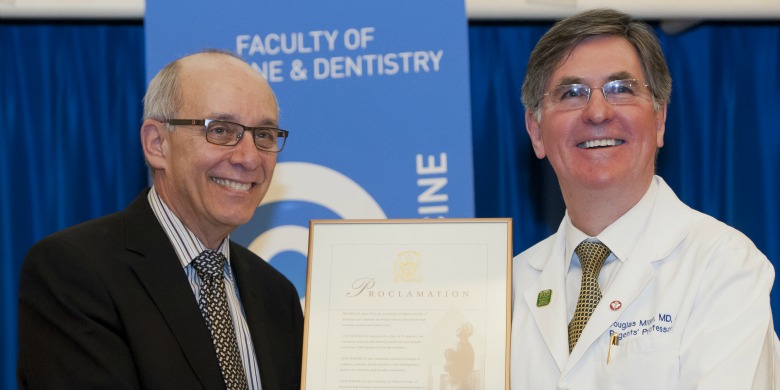 130117-100yearsofmed-banner
Edmonton Mayor Stephen Mandel presents D. Douglas Miller, dean of the Faculty of Medicine & Dentistry, with a proclamation marking Jan. 17, 2013, as "100 Years of Medicine Day" during the launch of centennial celebrations for the U of A medical school. (Photo: John Ulan)

(Edmonton) Hundreds of people filled Bernard Snell Hall today to kick off celebrations marking a major milestone for the University of Alberta’s Faculty of Medicine & Dentistry.

Alberta’s first medical school, where thousands of doctors and internationally renowned researchers have been trained, turns 100 this year.

“Today we celebrate a milestone meaningful to all Albertans and to patients far beyond our borders,” said D. Douglas Miller, dean of the Faculty of Medicine & Dentistry, to a nearly packed house. “It’s the anniversary of the beginning of one of the world’s finest medical schools located at one of the finest academic health sciences centres in Canada.

“For more than a century, this city and province have been magnets for people whose fates were forged and whose dreams were enacted.”

As part of the launch celebrations, Mayor Stephen Mandel presented Miller with a proclamation from the City of Edmonton marking Jan. 17, 2013 as “100 Years of Medicine Day.”

“I don’t think there’s any city prouder of its medical school than the city of Edmonton,” said Mandel. “We in Canada are so blessed, in Alberta we’re blessed, but in Edmonton we’re even luckier to have an institution that’s had 100 years of incredible commitment and dedication to a city giving medical care in so many different ways.”

Stephen Khan, minister of enterprise and advanced education, was also at the event on behalf of the province. It was the Government of Alberta that first decided to locate the province’s medical centre in Edmonton.

"I am proud of the extraordinary progress medicine has made over the past 100 years," said U of A President Indira Samarasekera. "Looking back at their humble beginnings, it is inspiring to see the groundbreaking accomplishments that the faculty has made over the years, such as the very first organ transplant in Canada and the Edmonton Protocol, a major breakthrough in Type 1 diabetes treatment, among many others."

Over the past 50 years, the faculty has partnered with Alberta hospitals to build an internationally acclaimed academic health-sciences centre that allows residents of Alberta and beyond to receive specialized medical care and access to breakthrough treatments.

Leanne Bilodeau is one of the thankful Albertans. A mother of four boys, two of whom have been diagnosed with autism, she has participated in and relied heavily on the world-class research of Lonnie Zwaigenbaum in the Department of Pediatrics.

“It means the world to me [to have the faculty here] because we never saw autism coming in our family,” said Bilodeau. “The day my oldest son was diagnosed, I’d already had the other three boys. It was really good to know that I could be a part of some research and also get a lot of feedback on what it might mean for our whole family.”

A leader in teaching and learning

In addition, the faculty’s medical graduates have shown to be the best educated in the country.

“For the past two years, graduates of our school have scored first on Canada’s national qualifying medical exams,” said Irfan Kherani, president of the Medical Students’ Association. “We are very proud to be part of a patient-centred institution known around the world for training physician leaders and highly skilled scientists.”

The launch of the centennial marks the official kickoff of a year of special events around the province that will welcome alumni, community partners, faculty members and, in particular, the people of Alberta whom the medical school serves.

“As we explore and commemorate our past, we are committed to creating a plan for the next decade, which will prioritize patient care,” said Miller. “The one thing that hasn’t changed is our purpose—we remain dedicated to advancing health through teaching, research and patient care.”

Read more about the medical breakthroughs made at the U of A medical school on the centennial website, www.med100uofa.ca