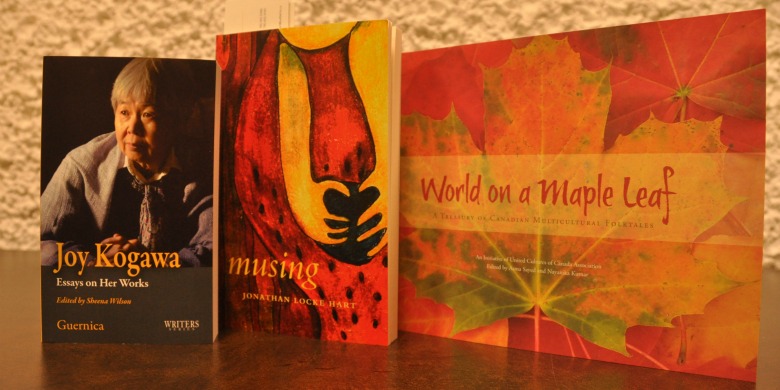 (Edmonton)  Three University of Alberta researchers were celebrated recently by the university’s comparative literature program. Their works are as compelling as they are wide-ranging. Asma Sayed entertains, educates and fills a gap in Canadian children’s literature, Sheena Wilson uncovers lesser-known works by one of Canada’s most important literary figures and Jonathan Hart muses on experience and love.

When people migrate, they take with them the artefacts of culture, both tangible and unseen. Sayed’s work brings some of the unseen—stories of the emigrants—to life in a new way. She has co-edited World on a Maple Leaf: A Treasury of Canadian Multicultural Folktales, written mostly by immigrants to Canada.

“What we wanted was for writers to tell the folktales they have brought with them in a way that those stories are accessible to Canadian children,” Sayed says. “The book provides a resource for Canadian children who can look at the stories and think about Canada as a multicultural nation.”

With people from more than 200 different cultural backgrounds in Canada, she says the country is a microcosm of the world. But this level of diversity creates a need, identified by United Cultures of Canada—a non-profit group working to promote integration of immigrant communities in Canada. That group, along with the City of Edmonton, funded her work. The book, which showcases stories from 25 cultures, is published by the Edmonton Public School board is considering it as an educational resource.

“The book fills a niche area because it brings together the variety and diversity that we have in this country,” she says. “We did not have books that show the diversity, we had isolated collections. What we’ve done is bring all these folktales from different cultures together within a single text.”

Joy Kogawa: Essays on Her Works is editor Sheena Wilson’s effort to introduce readers to the deep cannon of Kogawa’s work. The new book is a collection of writings on Kogawa’s popular and lesser-known works. Wilson says that Kogawa is an important Canadian literary figure, but that she’s known only for her novel Obasan, which was published 30 years ago this year. That novel narrates the internment of Japanese-Canadians during the Second World War and discusses the consequences of the post-war era. Obasan became popular and is the seventh most commonly taught Canadian novel in English literature courses, Wilson says.

“When all the literary criticism focuses only on Obasan, it detracts from the other accomplishments Joy has had and also from the many other versions of that story,” she says, noting that Obasan has come to represent all minority voices, sometime eclipsing other Canadian narratives.

Wilson’s book talks about Kogawa’s entire corpus of work, well beyond the success of Obasan, which has overshadowed much of the novelist’s other literary and activist works. Wilson hopes to correct that with Joy Kogawa: Essays on Her Works, published by Guernica Editions.

Teasing out Canada’s diverse stories, Jonathan Hart says, has been one of the distinguishing features of the university’s comparative literature program, which he calls unrivalled in the country.

“It’s the only comparative literature program in English Canada that offers bachelor, masters and PhD degrees,” Hart says. He says his colleagues’ books reflect a tradition of openness, of understanding the stories of minorities and trying to get them out to the community. “Unity is not uniformity, people in a multicultural society can be themselves, yet we can come together in a community.”

Hart’s Musing, published by Athabasca University Press, is a marriage of form and content, he says. The more than 100 poems in the book continue a 400-year-old style of poetry, the sonnet, that he has used to talk about his own experiences and, more broadly, about a human passion that fades with age.

“Sonnets are about a number of things but traditionally, they’re about love. And it seems to me that a lot of people don’t want to talk about love,” Hart says. “In a sense this is a poet talking to other human beings. Musing is a kind of outreach of one person talking to another on something that’s very important but that sometimes we get so sophisticated about—we think maybe it’s a bit naive and sentimental.”

He adds, “We shouldn’t be ashamed to be able to love and talk about the richness of love, be it romantic love, or love for friends, family, country or place.”