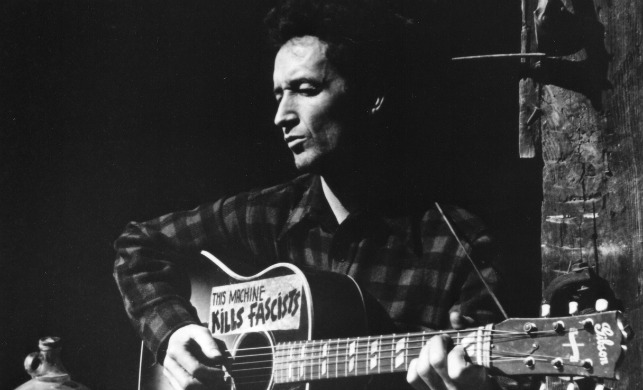 (Edmonton) To celebrate the 100th anniversary of Woody Guthrie’s birth, a two-day conference hosted by the University of Alberta’s folkwaysAlive! and the Edmonton Folk Music Festival is bringing together more than 20 experts to discuss the legendary singer-songwriter’s life and legacy.

The conference, entitled “Woody at 100: The Guthrie Legacy,” takes place Aug. 9 and 10 at the Ledcor Theatre at the Art Gallery of Alberta. A lineup of academics, writers, musicians, curators and film-makers will discuss Guthrie’s impact in Canada and around the world.

Three authors of new books on Guthrie will also speak at the event.

Performers taking part include Jerry Gray of the Travellers, who recorded the Canadian version of Guthrie’s most famous song, “This Land Is Your Land,” and a panel from the next generation of Canadian folk musicians, including Leonard Podolak, Nathan Rogers and JD Edwards of the trio Dry Bones, as well as Geoff Berner and Maria Dunn.

The art gallery is also hosting an exhibit titled “Woody at 100,” curated by the Guthrie Archives, on display from Aug. 7 to 26 at the lower level of the museum.

The Edmonton Folk Festival will feature Guthrie’s music with Arlo Guthrie and the Guthrie Family Band performing on the main stage Aug. 10.

For more information and tickets