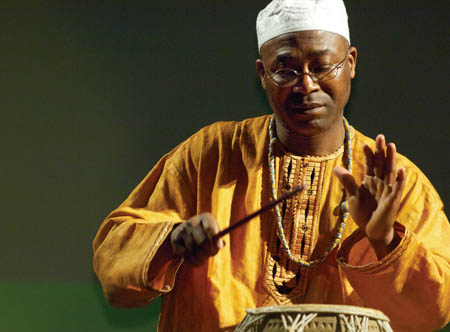 110324-largeformat-cri
The West African Drumming Ensemble performed at the Celebration of Research and Innovation.

(Edmonton) The University of Alberta’s Celebration of Research and Innovation officially recognized and acknowledged an exhaustive list of milestones, accomplishments, awards and achievements at a special ceremony this week.

Lorne Babiuk, vice-president (research) and MC at the event, says the broad range of accomplishments at the university over the past year—from the founding of the Li Ka Shing Institute of Virology to the Centenary of Augustana Campus to the golden jubilee of the Canadian Circumpolar Institute to a long list of individual awards given to U of A people—represent a remarkable achievement.

“We have had another wonderful year in the research and creative life of our university,” said Babiuk.

The Celebration of Research and Innovation was created in 2009 by the Office of the Vice-President (Research) to recognize the U of A’s exceptional talent and outstanding research achievements, as well as acknowledging the important support given the university by its partners in business, industry and government, and donors and community organizations.

University President Indira Samarasekera labelled the event “a celebration of every facet of research” from germination to project completion. “If ideas and talent are today’s currency, then the University of Alberta is very rich indeed,” she said.

Alberta Premier Ed Stelmach, who attended the celebration, was lauded for his and his government’s support of post-secondary education generally, and for the U of A specifically—support that has been instrumental in making the U of A a leader in research and innovation.

Carl Amrhein, university provost, likened the premier to fictional TV character Hannibal Smith, whose catchphrase, “I love it when a plan comes together,” he said, describes the premier’s long-term involvement in the development of the Health Research Innovation Facility, which houses the Li Ka Shing Institute of Virology.

As then-minister of infrastructure, Stelmach listened to the concerns of U of A researcher Lorne Tyrrell regarding the need for more research space and facilitated the construction of the facility. As premier, Stelmach helped provincial institutions maximize their funding opportunities through the Knowledge Infrastructure Program, a move that Amrhein says paved the way for research space and equipment to be outfitted in a quicker fashion than would have been possible otherwise.

“It was the existence of the building, finished and ready to occupy, that allowed the Li Ka Shing Foundation to choose the University of Alberta over two other institutions,” said Amrhein, musing that this was perhaps part of Stelmach’s “plan.”

This year’s Support Staff Research Enhancement Award winner, announced at the event, is Elaine Maloney, executive assistant to the director of the Canadian Circumpolar Institute. Maloney has worked for 25 years with the university’s various Arctic and circumpolar initiatives. Described as an instrumental part of the institute, Maloney manages more than 60 research grants annually. She was also the catalyst behind the founding of the Circumpolar Students’ Association. Her “famous” organizational abilities ultimately attracted the attention of the Association of Canadian Universities for Northern Studies, which asked her to lead a workshop last year.

“One testament to the dedication she has to her work is her training in the languages of the northern and circumpolar worlds,” said Amrhein. “Described in her nomination as the heart and the soul of the circumpolar institute, Ms. Maloney has consistently made a positive contribution to the research achievements of many researchers and students over the course of her years at CCI.”

The third annual Celebration of Research and Innovation was held March 22 in the Myer Horowitz Theatre to a near-capacity crowd.