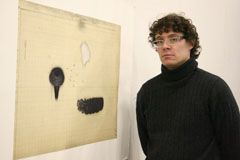 (Edmonton) A forthcoming international visual arts and dance exhibition, led by University of Alberta printmaking professor Sean Caulfield, will raise questions about how issues in Canadian society--such as how the emergence of new technologies, biomedical research and an aging population--impact contemporary perceptions of the body.

The show, The Body in Question(s), is the latest example, says Caulfield, recently appointed as a U of A Centennial Professor of Fine Arts, of how he and the printmaking program raises the profile of the university, creates opportunities to attract students and fosters interdisciplinary research at the U of A.

He says this exhibition, his centennial research program, results from another show, Perceptions of Promise—an exhibition that brought visual artists and scientists to discuss issues around stem-cell research—which a Montreal-based choreographer and artistic director, Isabelle Van Grimde, attended.

“Isabelle saw that I was interested in technology and the body, so she and I, along with printmaking researcher, Roy Mills, the FAB Gallery manager and Blair Brennan organized this exhibition, which brings together an internationally recognized group of creative researchers in music, architecture, dance and visual media, as well as scholars and scientists researching the history of the body and medical genetics.”

Caulfield says he tries to stay active in the international art scene because he believes competing with other international printmakers and lecturing at universities worldwide exposes the university’s printmaking program. He has won awards from Russia to Japan, taught at prestigious art schools around the world and Perceptions of Promise will be installed at New York’s Chelsea Gallery later this year. All of this contributes to the U of A’s printmaking program as one of the best in North America, his colleague Liz Ingram says. Caulfield says as a centennial professor, he will be able to do more.

“The centennial professor position offers inroads to research projects that otherwise would be more difficult for me to do and creates opportunities for me to partner with other intuitions and research groups,” he said.  He also uses exhibitions to recruit students.

“If I have an exhibition, say in Tokyo, it brings emerging artists in the city to the show,” which is how a student he met in Japan three years ago will come to the U of A as a post-doctoral fellow this fall.

“He could have gone anywhere in the world with the national scholarship he was awarded, but he has decided to come to the U of A. That’s a terrific sign that we’re doing something right,” he said. “For current students, the general experience of my being out in the contemporary art world is immensely beneficial to them because I bring back that experience and share with them.”

Caulfield says his contributions to the printmaking program come on the foundation laid by colleagues. “I was very fortunate to come into an area that was making strides through efforts by printmaking professors such like Liz Ingram and professor emeritus Walter Jule. They created a very active department, so that enabled me to hit the ground running,” he said.

Caulfield also creates opportunities among researchers that promote  interdisciplinary research at the U of A. He has worked with colleagues in the sciences and humanities in such projects as Imaging Science, which was the first time he marshalled scientists and visual artists together to discuss connections between art and biotechnology. It is also the first time he worked with his brother, Tim, who is the research director for the U of A’s Health Law Institute.

Caulfield currently serves as the president of the Society of Northern Alberta Print Artist, a non-profit, artist-run centre he says creates a bridge between the university and community.

“The society provides young emerging artists, who will contribute towards building a stronger local art scene, a place they could afford to work, so they could stay in Edmonton. It’s one of our roles at the university to continue building opportunities to create culture.

“If there are a lot of creative people around, creative things tend to happen.”

The location and date of the exhibition is yet to be determined.